Energy input in the Maize value chain in Benin 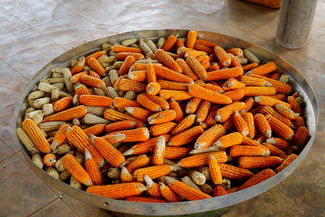 Worldwide, maize is the most widely cultivated crop with a production of over a billion tons per year and is therefore of very high importance for global food security and livelihoods, especially in developing countries. Maize is the leading staple food in West African countries with a yearly consumption of more than 30 kg/capita[1]. From 2007-2016, yields of rainfed maize systems in Sub Saharan Africa range between 1.68 to 1.99 t/ha[2]. Maize can be prepared in different forms which include whole-maize foods, porridges or beverages[3]. In Benin, maize is the most important staple food and the most cultivated crop, with 85% of farmers growing it. The area devoted to maize production is about one-third of the total agricultural area in Benin[4].

In order to compare the energy inputs and Greenhouse gas emission outputs of different activities, conversion factors are used to express all inputs / outputs into same units. Energy inputs are converted to the unit Megajoule (MJ), while the GHG emissions are expressed as kg CO2-equivalent. The factors are found in literature and contain not only the direct but also the indirect energy input and GHG emissions, as also the production and transport of inputs (e.g. fertilizer, fuels) are considered. 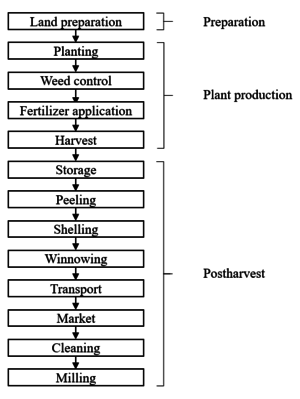 Maize production and processing have different processing steps, most of them are performed sequentially.

Maize production starts with activities of land preparation, where fields are prepared for the planting. The activities include usually the clearing of the fields followed by ploughing.

The activities of plant production start with planting with the first rainfalls, as most farming systems in Benin are rainfed. After a given time weed control is done by manual removal of unwanted vegetation, followed by the application of fertilizers, mostly NPK and urea.

Postharvest activities are the processing steps until reaching the final product. The harvested maize is stored in silos and removed and processed when needed to sell on markets or for own consumption.


Smallholder farmers usually do the land preparation and plant production manually, medium-sized farms commonly request the services concerning machinery for land preparation and equipment with or without operator. Large farms usually own the tractors for the cultivation of their crops. Processing of the maize except milling is done on farm level. The milling of maize is done by service providers who operate on village or neighbourhood level.

During the clearing of the fields, bushes and shrubs are cut down manually and removed/burned by workers equipped with machetes. This activity can also be done mechanized. The ploughing is done either manually by farmers equipped with hoes or mechanized with the help of tractors.


The following table shows the labour inputs, when the field preparation activities are done manually. The number of farms indicates on how many farms the data were collected. Labour inputs gives the mean value (and standard deviation) of the total labour of one person required to prepare a field size of one hectare.

The following table shows the amount of fuel required and the respective machine time for the mechanized clearing and ploughing of one hectare by tractor. 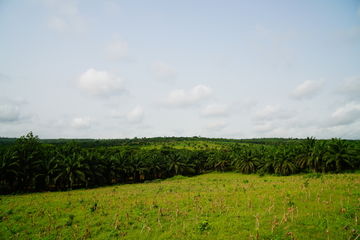 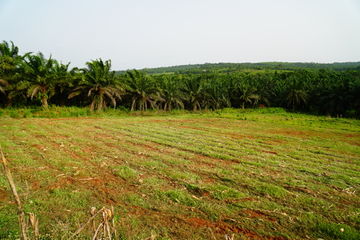 Maize field after mechanized clearing with a mulcher 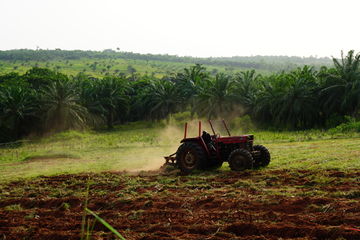 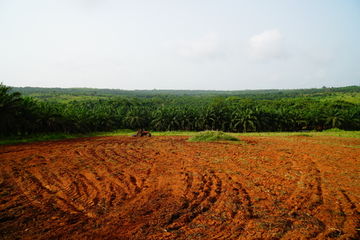 Once the field is prepared, farmers wait for favorable weather conditions before planting. This step occurs with the first rains at the beginning of the rainy season. Holes are put in the soil with hoes and are then filled with seeds. After planting, weeding is done to remove unwanted vegetation, which is followed by the application of fertilizer. Once the maize ears have well developed, farmers leave them on the plants for drying. The processes of plant production are all done manually.

The following table shows the agricultural inputs (seeds and fertilizers) as well as the grain yield per hectare. The number of farms shows on how many farms the data were collected.

The following table shows the work input in the processes of plant production. 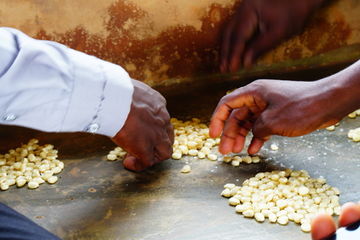 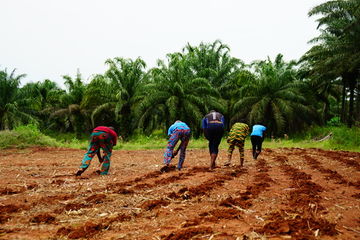 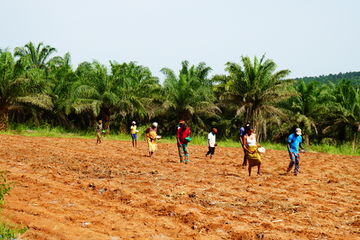 Maize grains are put into the soil 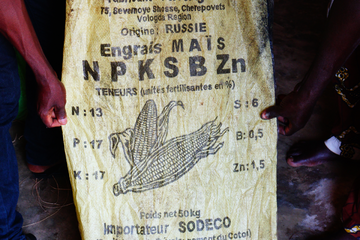 The NPK fertilizer used for the maize plants

The ears with husk are harvested and stored in silos. The maize is removed from the silo for own consumption or for selling in the local markets. The maize ears are then manually peeled to remove the husk. The separation of the maize grains from the cob is done by using a shelling machine. Then the grains are cleaned by wind winnowing or by using the airflow coming out from the shelling machine. After cleaning, farmers can transport the maize to the market. Before selling, the removal of broken grains and foreign material is performed manually. Consumers buy the grains and transport them to local milling stations, where the grains are transformed into maize flour. Apart from the milling, all processing steps are done individually by farmers.

The following table shows the postharvest processes and their corresponding energy input. Peeling is done manually, while the other activities are done mechanized. 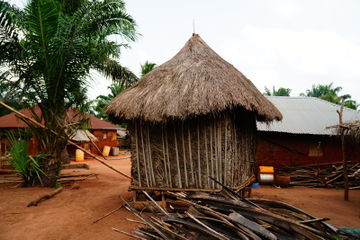 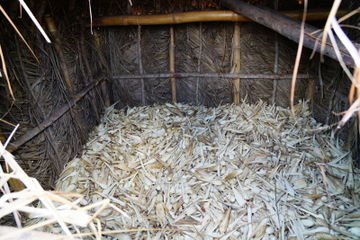 Inner view of the traditional silo 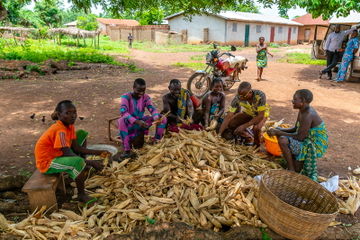 Manual peeling of the maize to remove the husk 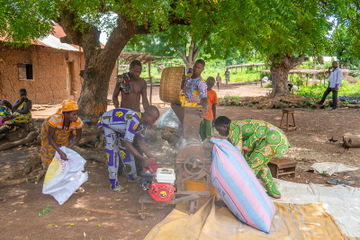 Mechanized shelling to remove the maize grains from the cobs 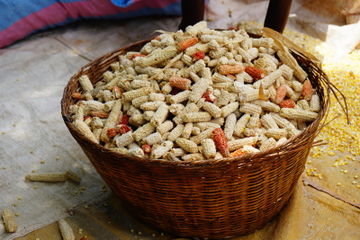 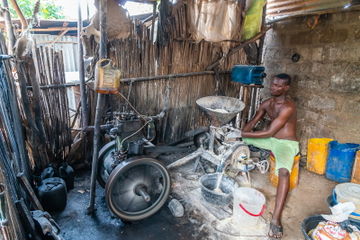 In the south of Benin, two cropping seasons are possible du to climatic characteristics. The land preparation activities are done within February and March. The planting takes place with the first rains in April. Weeding is done on average 27 days after planting. The fertilizer application is carried out in about 10 days after weeding. Depending on the maize variety, the harvest is done around 90 days after planting. Most of the postharvest activities are performed during the whole year. The second growing period starts right after the first harvest in August. Planting starts from the same month depending on the climate conditions, the harvest of the second growing period is in December.

The following figure shows the time period, in which the activities are usually performed. 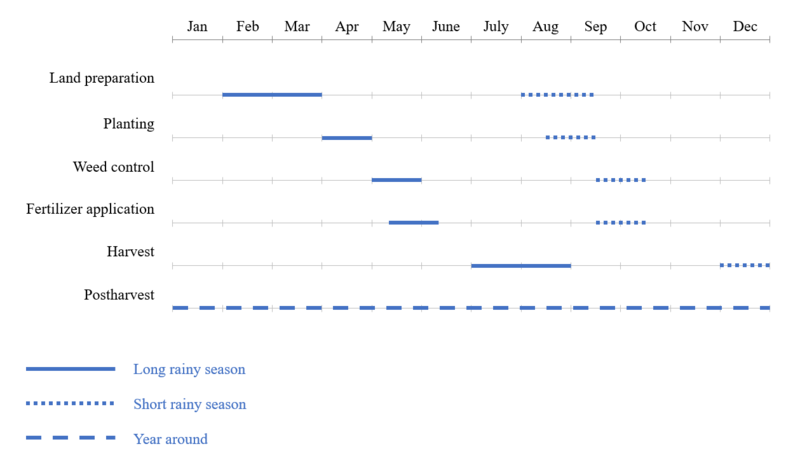 The total energy input into a field size of 1 hectare were found to be 8440 Megajoule (when ploughing is done mechanized). The following figure shows the share of each assessed activity. The highest share lies in the fertilizer application, as the production of fertilizers is highly energy intensive. The milling of maize show the second highest energy input, due to the high fuel demand of the milling process. 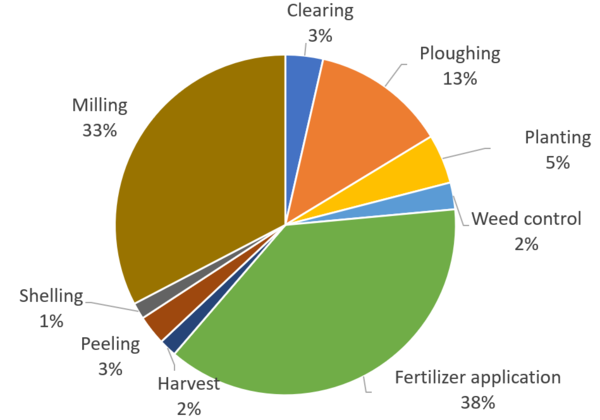 The total Greenhouse gas emissions sum up to 351.2 kgCO2-equivalent per hectare (when ploughing is done mechanized). The following figure shows the distribution of the assessed activities. The highest share of GHG emissions lies within the milling, followed by the fertilizer application. All activities done manually are considered to have no GHG emissions. 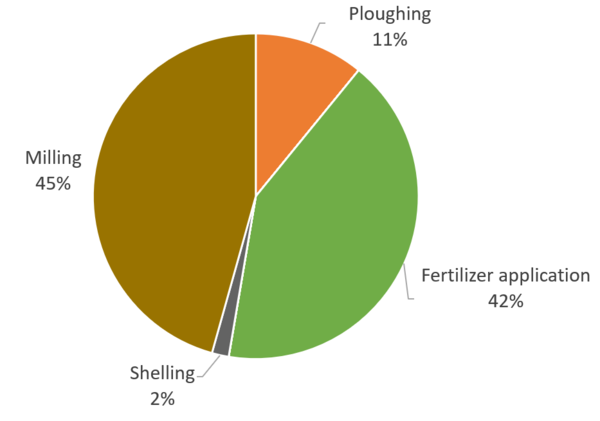 The results of this study show the energy inputs across the maize value chain in Benin as well as their respective GHG emissions. The milling was found to be a highly energy intensive process, mainly due to the high fuel consumtion of diesel driven maize mills. The maize mills work on service provider level and operate usually 6 days per week and 8 hours per day and are found across the country of Benin. Maize mills were found to have the highest potential for the implementation of solar energy along the maize value chain, to reduce GHG emissions and the dependency of fossil fuels.


In diesel driven maize mills the motor can be replaced with an electric motor, supplied by a PV-battery system or a hybrid PV-diesel-battery system.

Retrieved from "https://energypedia.info/index.php?title=Energy_input_in_the_Maize_value_chain_in_Benin&oldid=386893"
Categories:
Cookies help us deliver our services. By using our services, you agree to our use of cookies.