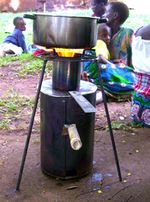 Micro-gasifiers cookstoves are small gasifier devices that create their own gas from solid biomass and are small enough to fit directly under a cook-pot.

Gasifiers can separate gas generation from gas combustion in space and time. In a reactor (gas generator) that is optimized for heat-dependent drying and pyrolysis, solid biomass is first converted into gases and vapors. These are guided into a combustion zone (gas burner) where they are burnt with a surplus of oxygen from a secondary air inlet. The following infographic shows this principle. 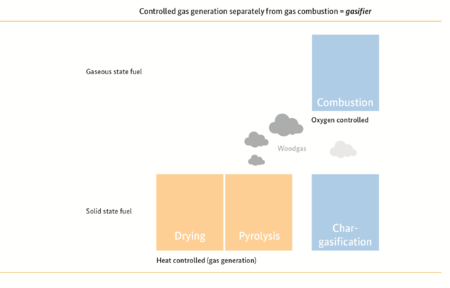 In a conventional fire the heat is controlled by regulating the fuel supply: the more fuel we add, the more heat we generate, provided sufficient air is available for the combustion. In contrast to this, gasifiers control and optimize both processes separately to achieve efficient and clean utilization of the fuel:

Gasifier stoves are currently the cleanest burning option to burn solid biomass in a cook stove. The “gas burner” provides the convenience and efficiency similar to cooking on fossil gas with very little soot and other emissions.[1]

For more information on the process of wood gas generation see also Cooking with Woodgas.

There are also advantages compared to stoves operated on alternative fuels like liquid fuels or solar:[1]

Solid biomass fuels are often available locally (affordable access at own convenience), easy to transport and easy to store after gathering.
Creation of gas from dry biomass can be achieved with very simple inexpensive technology directly in the burner unit, which is portable and does not require piping or special burner-heads (in most cases).
Performance similar to biogas (but not dependent on water and bio-digester) and approaching the convenience of fossil gases.

Furthermore, pyrolytic micro-gasifiers can create charcoal, which may be used in a charcoal stove, further processed into charcoal briquettes or used to improve soil productivity as biochar.[1]

Disadvantages and Challenges of Gasifier Stoves

Users may encounter some challenges when using gasifier cookstoves:[1]

The Potential of Gasifier Stoves

Gasification has an immense potential to make use of a great variety of biomass residues that are difficult to burn cleanly in conventional stoves. Wherever stick-wood is plentiful and at a low cost available, conventional improved cook stoves (e.g. rocket stoves) are more attractive options. In areas where charcoal and firewood are becoming a scarce or an expensive commodity, micro-gasifiers will be of growing relevance as an option to cleanly burn alternative biomass fuels.


Micro-gasification for household cooking is a relatively young development. The principle was invented in 1985 and the first commercial micro-gasifier was available in 2003. Since 2011, there has been a significant increase in the diversification of gasifier models. New developments come up virtually every day.

Most gasifier stove models follow the basic TLUD principle. TLUD stands for Top-Lit Up-Draft. This is different from most stoves which are Bottom-Lit Up-Draft. With a TLUD stove, the fuel is loaded all at once into a container and lit from the top of the stove. Slowly, the top fire heats biomass below, and it gasifies. The flame burns the gas emitting from hot biomass below. When all the gas is gone, only charcoal is left and the flame goes out.[2][3]

TLUDs are easy to adapt and replicate within individual projects without patent infringement or copyright issues. The simplest TLUD can be in the form of a single tin can combustion unit with separate entry holes for primary and secondary air.[1]

Basic design features of a TLUD gasifier stove are shown in the following figure. 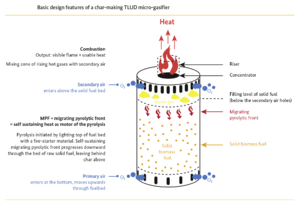 design features of a TLUD gasifier

There is a steadily growing variety of gasifier cookstoves, using either natural draft or forced air by a fan, to improve mixing of flame, gas, and fume and to reduce emissions. The publication Micro-gasification provides a compilation of available models.

Chunky fuels such as wood chips, briquettes, pellets, etc. allow for sufficient natural air-flow through a fuel by way of natural draft. Most natural draft stoves are easy to replicate for local tin-smiths in developing countries, even without electricity access. The oldest known Top-Lit Up-Draft (TLUD) concept applied in a developing country is the so called PekoPe design. It was invented by Paal Wendelbo (1929-2014) in Africa in the late 1980s and introduced in Malawi, Tanzania, Uganda, Ghana and Mozambique. It is likely the simplest TLUD design with the longest proven field-experience. It is very simple to make using any type of metal and ideal for replication. Furthermore, the stove can be scaled from household sizes to institutional and commercial sizes.[1]

There are also fan-assisted stoves, which typically have very low emissions and provide a high level of convenience to the user; however, the fan makes them more expensive than natural draft gasifiers.[1]

One example is the Philips stove, which had previously been built in small numbers in India and is now produced in South Africa. In November 2014, Phillips and SNV decided to collaborate in Kenya and Ghana for disseminating the stove.[4]

Another example is the stove ACE 1 produced by African Clean Energy (ACE)LF1] in Lesotho since 2011. The company used to produce the Phillips stove and has now developed its own model. The ACE1 stove is made of a ceramic combustion chamber placed in a stainless steel body. It uses a solar panel to charge the battery, which can also be used to charge a mobile phone or run a LED unit. When fully charged, the battery will power the fan for over 20 hours of cooking. The stove saves up to 70% of fuel compared to traditional stoves. According to the company, 40,000 stoves have been sold up to 2015.[5] The stove is sold for 150 USD.


TChar stoves combine the benefits of a TLUD gasifier stove with the advantages of a charcoal stove. A TChar stove starts with almost any type of dry biomass as fuel for gas-style cooking while making hot charcoal that is subsequently burned to continue the cooking on a charcoal stove that is the base of the TChar unit.[6]

There are various types of natural-draft stoves with a conical fuel hopper for rice husk. The advantage of these designs is that they do not require electricity and allow for continuous feeding – also referred to as quasi or semi-gasifiers. The disadvantage is that they need constant attention and a good bit of experience to operate: the flow ability of rice husk is poor, so it is necessary to tap the stove frequently every 5 to 10 minutes to keep the fuel feeding the burner and to prevent the fire from going out. Tapping it too hard, however, can cause the rice hulls to spill out of the bottom and disrupt the cone of coals. The stoves are much shorter than the rather tall and top-heavy TLUD rice husk gasifiers and a promising option for areas where stove height might be a barrier for cultural acceptance. It is also ideal for areas where electricity access is a challenge and purchasing power demands low-cost options. Countless tin-smiths in many Asian countries manufacture these stoves.[1]

It had been regarded as impossible to gasify rice husk in small TLUDs until Prof. Alexis Belonio from the Philippines proved otherwise. He designed a burner head that permits for preheated secondary air supply in a single-walled unit. Up to now over 3,000 stoves have been sold since 2006. Several commercial rice-husk gas burners are now based on his concept. They are all top-loaded, top-lit with the up-draft assisted by a fan that requires an external power source. Prices vary between 10-110 USD, depending on construction materials, number of burners, and country.[1]

Retrieved from "https://energypedia.info/index.php?title=Gasifier_Stoves&oldid=257567"
Categories:
Cookies help us deliver our services. By using our services, you agree to our use of cookies.