Historical Perspectives on Electricity Generation in Africa - Swedish Hydropower Constructions in Tanzania in the Era of Development Assistance, 1960s – 1990s

May-Britt Öhman is a Swedish researcher who wrote her dissertation in 2007 on "Taming Exotic Beauties: Swedish Hydropower Constructions in Energy Situation Tanzania in the Era of Development Assistance, 1960s – 1990s". She also collaborated with Prof. Heather J. Hoag, University of San Francisco, who focused in her dissertation on the Rufiji River to publish the article “Turning Water into Power: Debates over the Development of Tanzania’s Rufiji River Basin, 1961-2001.”[1]

What is Technoscience? Important Influences on the Presented Dissertation

In the present, May-Britt Öhman switched her research focus to indigenous people in Sweden as project leader of the research project “Rivers, Resistance, Resilience: Sustainable Futures in Sápmi and in other indigenous Peoples’ Territories”.[2][3]

In her research, Dr. Öhman tried to "solve riddles":

Generally, Dr. Öhman critizises the general agreement on what is scientific objectivity - the idea from “the gaze of nowhere”. New discurses on what is scientific critize for example the evolution of today's academia. Historically, men met each other in dinner clubs to discuss what they got involved in. These clubs later were called "royal societies" to emphasize their importance and what was produced in these clubs finally was called science. Today, a critical question on who decides to produce a truth, would get Dr. Öhman's answer that the truth is where the money accumulates.

Scientific papers state that they tell the truth, they are not personalized. The researcher does not say: "I did this and found out this because I am interested in the topic".


Specifically for studying the Kidatu hydropower project the following factors were regarded:

Most important sources to conduct this type of studies are archives. Dr. Öhman visited the Swedish national archive, the archive of the Swedish development agency SIDA and of the local power producer Tanesco (see slide 47).


Also, qualitative interviews were made and historical communications were studied. The interview partner were mostly engineers who worked at the construction of the dams. An example for private communication material that could be studied was the diary of Prof. Reinius (hydrology) wife who travelled with him (see slide 48).

In 1961 a survey of the Rufiji River Basin was published. After the huge failure of the ground nut scheme, which was an attempt to agricultural modernisation through mechanization in the Rufiji valley, the British colonial government wanted to go ahead with irrigation schemes for agricultural development. At this point the British governor turned to the FAO, the Food and Agriculture Organisation of the United Nations, with a request for a study of the water resources of the Rufiji river basin.


A deal was closed between Tanganyika and FAO in 1955, and a study was initiated with the purpose to produce a scientifically based multi-purpose project. The aim was to develop the river basin through flood control, irrigation and economic development.

At independence from Great Britain (1961) the Tanzanian government wished for development of electricity generation AND management of water resources (mainly for irrigation of agricultural land) and looked for another country as partner in development.


However, as Swedish development assistance and engineers entered the focus on single purpose hydropower – ignoring agriculture. As a consequence, the British dominance in the power sector was replaced by Swedish dominance with the disadvantage that earlier knowledge produced by British colonial officers was disregarded.


Why do you think this happened? Why did the Swedish engineers and development assistance focus on power production only?

The Rufiji Basin Survey was disregarded at independence

The first chart shows how the situation in the infrastructural planning in Tanzania changed from before independence (1961) and at the time of independence.

At independence, Tanzania wanted to get rid of British influence and thus invited Sweden to plan the construction of a national electricity supply system, supported by the world bank. Tanzanian politicians decided on focussing on electrification amongst others because this is an indicator for the development of a country. This decision introduced the "Big Dam Era" from the 1960s to the 1990s. In 1990, 95 % of the electricity generation in Tanzania came from hydropower plants.

Sweden, at this time, had already an experienced hydropower industry (in this case represented by Sweco) that started to look for international projects. Sweco succeeded with a major hydropower export. Anyhow, there was little understanding of the local conditions. Dams were planned with a height of 15 meters from crest to foundation but without regarding the multipurpose usage of the rivers feeding the reservoirs.

The Rufiji River lies comletely in Tanzania and is additionally fed by the Great Ruaha River. The amount of water transported by these rivers made them interesting for hydropower exploration. Where the Great Ruaha River adds to the Rufiji River the Mtera Basin was planned. The Mtera dam was constructed from 1975 to 1979 and is the biggest hydroelectric dam built in Tanzania. Downstream, the Kidatu dam was built in two phases in 1975 and 1980.

The typical hydroelectric power station is built with a reservoir at the top of a mountain or hill. Tubes go down as deep as economically feasible to fed the turbines and then the water is led into a river bed. To the right, you can see a picture showing the Kidatu hydropower plant in the year 2000. Obviously, nearly no water is available for power production.

Problems which can be Identified From a Sociotechnical Perspective 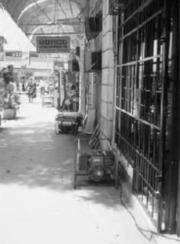 Diesel generators have to back-up the national grid

The single usage for hydropower production that Mtera and Kidatu dams were built for, caused severe problems. Official warnings were sent to SWECO and the SIDA but anyhow the construction went on – unchanged. The Swedish technoscience paradigm transferred to Tanzania states that the construction of largescale hydropower plants were understood as important progress for Tanzania. The state considered the initialization of a national electricity grid as “greater benefit” for the nation. The local inhabitants and indigenous people of the affected regions were made “invisible” by the state. The massai were not taken into account when calculating the area of the river that was used - only their kettle - because the massai were meant to move to villages. The exploitation of the territory that was done in times of colonialism went on even when independence came.

This quote from a letter by a Swedish engineer working for Sweco, regarding the construction of the Mtera dam, was sent to the Swedish development agency in 1972:


“With its almost complete draw-down and consequent wide muddy shoreline, Mtera reservoir will be of little or no use for fisheries, for settlement or for watering animals, stock or game. Except very occasionally when full, the dam will not even be attractive to look at. Altogether therefore Mtera dam seems justified only to justify the development of Kidatu to its full 200 MW capacity: altogether Mtera dam will be wasteful of water resources and wasteful of good fertile land, 600 km2. – an area the size of Bahi swamp and just as wasteful. Large as it is Mtera dam will not even contain the largest floods which is experienced every 5-6 years. Some alternative to Mtera must be found even if it is more expensive.”[4]


At the right, you can see Mtera dam at minimum shore level. Water can only be seen at the foot of the mountains. The maximal depth of the dam was at 6 meters.

Right after the 1990s - when the Big Dam Era ended - and the discovery of the frequency of short cuts, independent power producers (IPP) were allowed to establish in Tanzania. IPPs quickly installed power plants producing expensive electricity by burning diesel and gas. Power interruptions are common and so - besides of big power stations - Diesel generating sets produce background noise in many streets in Dar-Es-Salaam, harbour city in Tanzania.


In the present, the national grid in Tanzania suffers from frequent short cuts mostly coming together with draughts. As recently as in November of 2013, a crisis caused by draught and power rationing was experienced. Tanesco, national power utility, announced a power interruption of ten days. This type of news would be a catastrophe in developed countries. Imagine Berlin being out of electricity supply for more than a week! The interruptions were due to a massive maintenance of the gas plant (245 MW) at Songosongo in Kilwa District. Gas fired plants are one of the alternative sources of energy besides hydro power production.[5]

Historic perspective on electricity generation in Africa by May-Britt Öhman

Retrieved from "https://energypedia.info/index.php?title=Historical_Perspectives_on_Electricity_Generation_in_Africa_-_Swedish_Hydropower_Constructions_in_Tanzania_in_the_Era_of_Development_Assistance,_1960s_–_1990s&oldid=93019"
Categories:
Cookies help us deliver our services. By using our services, you agree to our use of cookies.