Impacts of Rural Electrification in Uganda 2011-2019

Systematic long-term monitoring of electrification programs is rare. This article presents the results of a six-year monitoring exercise to track impacts of rural electrification in the West Nile sub-region of Uganda. It is based on the publication 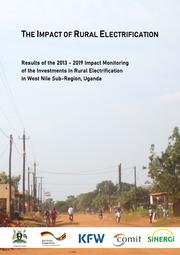 This reserach aims to contribute to a better understanding of the challenges and dynamics of the implementation as well as of the strategic design of rural electrification programs in order to maximize development impacts of such interventions. For decades, grid extension has been perceived as the ultimate means for rural electrification, its high costs justified by the assumed welfare gains in rural development. Cost reductions in off-grid solar as well as sobering results of recent impact studies for grid and off-grid electrification emphasize that policy makers should re-consider impact assumptions and cost-benefit rationales for future electrification planning and strategies.

Implemented on behalf of the Ugandan Ministry of Energy and Mineral Development (MEMD) and KfW Development Bank, this research adds empirical evidence to the recent reassessments of grid electrification impacts. It is the result of a rigorous impact monitoring exercise of rural electrification in the West Nile region of Uganda. Over four consecutive monitoring surveys in 2013, 2015, 2017, and 2019, we conducted 9,750 interviews with households, businesses, secondary schools, and health centers, using a double-difference approach (with treatment and control groups) for impact attribution.

The sub-region of West Nile is located in the most north-western part of Uganda and is structured into 9 districts – Adjumani, Arua, Koboko, Maracha, Moyo, Nebbi, Yumbe, Zombo, and the recently formed Pakwach district, separated from Nebbi – from which the two districts Adjumani and Moyo are not covered by the rural electrification program. West Nile is among the six poorest sub-regions of Uganda, with a poverty rate of 35% in 2017. Due to political conflicts in this area between the 1980s and early 2000s, West Nile has considerably lagged behind in terms of economic and social infrastructure compared to other regions of the country.

Most people in the region live in the districts of Arua, Nebbi, and Yumbe and the equally named towns are the largest migration centers of the region. The biggest town in West Nile is Arua, which is also the main commercial supply center and transport hub in the region. Based on the 2014 census, the population in West Nile is estimated at 3.1 million by 2019, or 2.76 million, if only the seven districts covered by the electrification program are considered. Additionally, it is estimated that almost 400,000 refugees mainly from South Sudan are living in five large settlements in Arua and Yumbe districts. Detailed socio-economic information on the West Nile region is provided in Annex 2 of the publication.

In 2003, the Ministry of Energy and Rural Development (MEMD) awarded to WENRECo a 20-year license to operate the existing distribution network in the remote West Nile region of Uganda.[1] At that time, the West Nile power grid was limited to a medium voltage distribution network connecting the three towns of Arua, Nebbi, and Paidha. WENRECo invested in a 1 MW heavy fuel oil generator and started to build the 3.5 MW hydropower plant Nyagak I. However, the construction of Nyagak I was considerably delayed and WENRECo was almost at the risk of insolvency in 2008. Against this background, the Governments of Uganda and Germany included the West Nile Grid Rehabilitation and Extension Program into the Investment Program in Renewable Energy and Energy Efficiency in Uganda, which is coordinated by MEMD, financed by KfW Development Bank, and implemented by UEDCL and WENRECo. The West Nile electrification program was financed with EUR 24.6 million by KfW Development Bank and with EUR 7.5 million by the Government of Uganda, while WENRECo contributed EUR 5.5 million to the investment into the hydropower plant Nyagak I. The program components grid extension and promotion of productive, safe and efficient use of electricity have been co-financed by the EU with EUR 3.5 million.

The program aims at overcoming the challenges of providing clean, reliable and affordable electricity to rural populations in the seven districts Arua, Koboko, Maracha, Nebbi, Pakwach, Yumbe, and Zombo. Its main results have been:

Grid electricity has been made available to about 1.6% of the population of West Nile, and to a significantly higher share of businesses and social infrastructure. But grid customers suffer from low reliability and poor service. We consider unreliability of power supply as a major factor preventing intended positive effects of grid accesssuch as investment in productive activities and replacement of generators and fossil fuel use. Poor reliability might also cause losing dissatisfied commercial and industrial customers (accounting for 75% of revenues), which directly endangers WENRECo’s financial viability. Furthermore, the planned future grid extension and densification poses an additional threat to the operational viability of WENRECo. We have demonstrated that additional customers are lowering the already poor income per customer ratio and that past subsidized connection offers resulted in a significant share of inactive customers. But future grid densification might even be less successful as expected, since 60% of not connected households state high costs as reason for nonconnec­tion, regardless a standing offer of a 100% subsidized free 1-pole connection, which suggests that costs for inhouse wiring remain a serious barrier for poor households.

Impacts of grid access have been much weaker as anticipated, partially due to much higher off-grid solar electrification levels both in the control and treatment group. Grid access leads to an increased use of electrical lighting and larger appliances in comparison to off-grid solar access, but for rural households the differences are limited. Similarly, grid connected level III health centers and secondary schools show a significant increase in electric lighting and appliance use, but this does not translate into significant impacts on the provision of educational or health services. The difference for larger level IV and V health centers is even less pronounced, as almost all of them had used solar systems and generators already before getting grid connected. It appears that most households and even health centers and schools are able to satisfy their basic power demand based on off-grid solar, provided that solar systems are reliable and maintenance and repair service is available, which so far seems not to be the case. Even for rural businesses in trading centers, grid electricity does not appear to be a game changer; even though more businesses used TVs and fridges, they neither increased business hours or employment nor their turnover. In contrast, businesses in towns increased employment by 22% and more than doubled their turnover in the same period of time. Observed economic effects might be suppressed by low reliability of grid power and the limited business capacity and access to financing in rural areas. But increased competition between rural and urban businesses should be investigated to check for possible crowding-out effects of grid access in rural areas.

The experiences with this program confirm that grid extension alone cannot reach the aim of universal access to electricity for all by 2030. Despite a massive intervention, only small fractions of the total population of West Nile and of the population within the reach of the electrification corridor, respectively, can be connected to the grid. Even within the electrification corridor, the current free 1-pole connection policy is not reaching the poor, as they still cannot afford the additional cost of inhouse wiring.

The cost of grid extension (without the investments in power generation) has been in the range of USD 1,200 per connection. While this is a moderate value compared to other grid extension programs, we observed that most rural household and business customers use only a fraction of the potential grid power access and accordingly reap little benefits. For these customers, adequate access could be provided by off-grid solar systems at a fraction of the cost. Increasing the cost efficiency of the electrification strategy would release funds that could be used to finance social access programs for poor rural households that are currently not reached, neither by grid extension nor by the commercial off-grid solar market. Such an integrated strategy could also avoid that better-off households are benefitting most of rural electrification programs while the poor are left behind, which is effectively increasing the perceived relative poverty in rural areas.

Although the power utility received substantial support over past years, the performance is still unsatisfying. Especially small utilities struggle to hire and keep qualified staff in remote rural areas. And the initial investment to set up an effective administration and technical operation are high compared to the low power sales and related income. The required institutional support might be higher as often anticipated.

This experience should also caution the enthusiasm of mini-grid deployment in remote rural areas. Mini-grids often require higher tariffs to be economically viable. In absence of larger customers, off-grid solar will in many cases represent the more cost-efficient option.

Another lesson is that impact assumptions should be realistic and not follow simplified linear impact chains. Electricity can greatly increase efficiency of economic activities and social services, but this does not lead automatically to relevant economic or social impacts. Especially rural economic development has complex dynamics that cannot easily be anticipated.

For the impact monitoring, the double-difference approach enabled the contrasting of patterns and trends within the treatment group to the general development trends in the region. We used four data points over a six-year period to make existing fluctuations in variables visible and even trace medium-term impacts. The combination of quantitative and qualitative surveys was crucial to be able to cross-check and discuss quantitative results with local stakeholders.

Recommendations to the power utility

Retrieved from "https://energypedia.info/index.php?title=Impacts_of_Rural_Electrification_in_Uganda_2011-2019&oldid=315095"
Categories:
Cookies help us deliver our services. By using our services, you agree to our use of cookies.