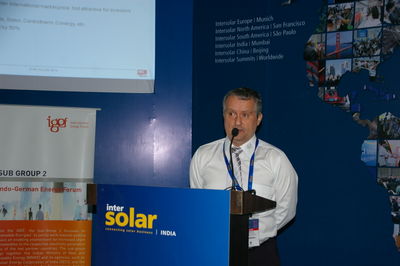 Credits:IGEF/C.Ernesti
High ranking representatives of India’s solar industry seem not be in favour of existing domestic content rules under the National Solar Mission. At a panel discussion organised by Indo-German Energy Forum , a neutral platform of political dialogue, at Intersolar Mumbai, high ranking representatives of the industry made strong statements. Ivan Saha, President of Vikramsolar, one of India’s biggest solar module manufacturers and also chairman of a manufacturer’s association, said: “The industry has to be self sustainable. This can’t be achieved with subsidies.” Jagdish Agarwal, Senior Vice President of Welspun Energy Ltd. and Mayank Shah, Executive Director – Finance of Waaree Group agreed on this. Agarwal compared the situation to the seventies when the Indian automobile industry was still in its infancy. He mentioned that at that time no domestic content rules were in power, but nevertheless a competitive industry was developed in the end. However, medium-term direct support by the government to the manufacturers would be appreciated, like 5 years tax holidays for companies ready to invest in state of the art production lines and also in Research & Development. Ivan Saha thinks this should not only be an incentive for Indian companies, but also for foreign competitors who want to get engaged in the Indian market. “This will help us to form up a competitive industry” said Mr. Saha. He is currently writing a “White Paper” with his recommendations to the government.

Future of Solar in India

Under the National Solar Mission launched in 2010, India has set itself ambitious targets to become one of the world’s leading solar nations. At the moment, the total installed solar power in India is about 3 GW which should become at least 20 GW until 2022. The new government under Prime Minister Modi has already announced 100 GW. Therefore, the government makes all reasonable endeavours to attract foreign investment. RE-INVEST, an international investors summit will be held in New Delhi 15th to 17th February 2015, organised by Ministry of New & Renewable Energy. Before this, from 11th to 12th February 2015, the subgroups of Indo German Energy Forum will meet. The Forum meeting itself will be held at 13th February. In April 2015 India will be official partner country of Hannover Messe, the world’s largest industry fair and energy will be one of the most important topics. At Hannover Messe 2006, the Indo German Energy Forum was founded, by the chancellor of Germany and the Indian Prime Minister.