Many wind turbines generate electricity at a voltage of 690V, which is classified as low in terms of common electricity transfer systems. Large modern turbines increasingly use higher voltage levels like 10-12 kV. If power is produced at a low voltage level, the output is often stepped up by a tranformer installed directly at the wind turbine before it is fed into the internal grid between the turbines of a wind park[1]. This internal grid provides transfer of the generated energy to the grid connection point. Cables and cabling concepts have to be chosen appropriately for the expected power to be transfered.

There are two common base alternatives for an internal cabling concept: radial feeders and ring feeders.The ring feeder concept is the most reliable concept, based on the n-1criterium. N-1 criteria ensure that the disconnection of any equipment of the network is allowed without serious consequences for the total network. This is valid for the grid devices like cables, transformers, substations, busbars, etc. In the case of a cable section fault, the corresponding cable section will be disconnected automatically, and all wind turbines will still keep in power production, supplying in both directions through the operative cable sections, as shown schematically in the following figure. 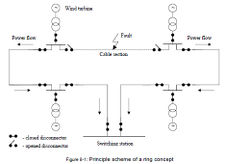 Principle scheme of a ring concept

However, the ring concept is more expensive than the radial concept because the double cable length (preferably even in a separate trenches), the additional two disconnectors for each cable section, as well as an additional switching station feeder for each ring in order to ensure the ring concept.
The radial feeder concept is more economical than ring feeder. There is only one way cable necessary for each area. In case of a wind turbine or transformer fault, the corresponding device will be disconnected and the remaining wind turbines stay connected to a feeder and still produce power. The main disadvantage of this concept is the low reliability in case of a cable section fault (short circuit). The whole feeder will be disconnected for a time period for the repairing works.


The principle scheme of the radial concept is shown in the following figure:

Principle scheme of a radial concept

It is advantageous to implement the internal cabling with several radial feeders in order to increase the generation availability (in case of above described cable section fault only one feeder will be disconnected and remaining one will still supply the power to grid).

The selection of the optimal cable type and its cross section depends on both the arrangement and grouping of wind turbines (number and power of turbines) and also the choice of feeder concept.

Important parameters for the choice of the cable type are:


To calculate the power flows the exact cabling layout has to be known: In a wind park normally wind turbines are bundled into groups of several MW. Using the a radial feeder concept this strategy is favourable, because failures in the internal grid only influence the one group of the wind park. The second reason for coupling wind turbines into groups is keeping the necessary diameter of internal cables smaller.

Earthing networks for wind turbines within a wind park

The earthing network of the wind farm is composed of copper cables of 95 mm² to be installed directly on the trench.

Within a proposed internal cabling concept, there is a certain number of incoming radial feeders to the switching station busbars. An higher capacity transmission line normally connects to the transformer 15 kV /132 kV / 230 kV, depending on the voltage-level of the power grid the electricity is fed in.
It is advantageous to locate the 33 kV switching Station in the central area of the Wind Park. The length of cable and overhead transmission line can be reduced with the proposed implementation and problems regarding electrical parameters such as voltage drop, higher power losses, cable costs etc. can be avoided. The size of the chosen power transformer depends on the installed power of the wind project.

Retrieved from "https://energypedia.info/index.php?title=Internal_Wind_Park_Cabling&oldid=96663"
Category:
Cookies help us deliver our services. By using our services, you agree to our use of cookies.