The Empowering Communities II project is implemented by the Organization for Integrated Socio-Economic Development (KULIMA) and others (Adel Sofala and Livaningo) in Maputo, Inhambane, Gaza, Sofala and Manica provinces in Mozambique.

Mozambique has a population of around 28 million inhabitants, of which approx. 80% live in rural areas and have biomass as the main source of energy. About 75% of the energy consumed in the country comes from woody biomass. Forests, farmlands, lakes, and other habitats are affected by calamities such as fires, storms, and droughts, and nearly all landscapes are affected by human-induced pressure such as pollution, climate change and deforestation. These disturbances will directly and indirectly affect the livelihood of communities, for example through reduced production or access to firewood and other resources. Ecosystem degradation also reduces the ability of the communities dependent on them to withstand shocks and results in short-term disturbances as well as gradual but continuous changes in the climate and socio-cultural practices and institutions. Furthermore, the woody firewood resource has also become scarce due to widespread deforestation.

KULIMA is promoting two types of cookstoves i.e fixed stoves with chimneys and mobile stoves. Both the stoves are built with local material (clay). The fixed stove uses firewood as fuel while the mobile stove uses charcoal or firewood. Both the fixed and mobile stoves are energy-efficient, keep smoke out of the kitchen, emit little smoke and are not harmful to health like traditional stoves. These stoves saves 60-70% of the used fuel. The fixed stoves with chimney are developed by the trained masons in the kitchens of the families while the mobiles stoves are produced by masons trained by KULIMA. 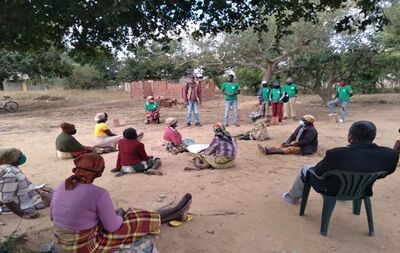 The” Empowering communities” project addresses clean cooking at community level. Local leaders mobilize the citizens, collect lists of households signing up for an improved cookstove, gather financial contributions from each household to cover the raw materials, and identify local masons that are willing to participate in the construction work required after training. With collective efforts, affordable fixed clay stoves with chimneys are built for everyone with a roofed kitchen. Mobile stoves are promoted to those without kitchens or still waiting to have the fixed stoves.

KULIMA has been working for one year in Boane with awareness raising, training local masons in production of fixed improved clay stoves with chimneys and providing technical assistance during construction and use. It has established various sales points for selling the mobiles stoves. After one year, 3,365 households in Boane have converted to improved stoves and no longer use the three stone cookstoves.

For the fixed stove with chimney, beneficiaries are households in communities who are vulnerable from climate changes and have harmful cooking practices in rural districts. Promotion of the fixed stoves with chimney in an integrated part of a community project for increased resilience that also includes natural resource management, saving and loan groups and solar systems for basic access to electricity.

For the fixed stoves with chimneys, KULIMA collaborates with local leaders and government to held community meetings to explain the advantages of using these kind of stoves. Then the local activists and KULIMA project staff do door-to-door advocacy to convince beneficiaries to use the stoves.

All families with a new stove receive advice on use and maintenance. Clay for regular maintenance and repair is available freely in the community.

The repair services and the replacement of clay plate are free during the warranty period. The long-term sustainability of the stoves is guaranteed as they are made in local material with the local activists and local producers.

For the fixed stoves with chimneys, the beneficiaries pays a small amount of 100 MZN as remuneration for the mason (who builds the stove) as well as to cover the cost of the chimney sheet. KULIMA provides good quality the clay and does the community mobilization work. Some families with special needs are supported with free material and services from the community or the project.

Impacts on the Community

With a community approach and in close cooperation with the local leaders, it is possible to phase out cooking on three-stone fire in the community. Use of locally produced clay stoves offer convenient and affordable solutions. Use of local masons ensure local ownership and competence needed to maintain the stoves.

In Boane, a District in Mozambique with around 134.006 people, more than 65 % live in poverty and depend on firewood for cooking. KULIMA introduced improved stoves in 2021. These improved stoves are highly valued, first and foremost for fuel savings. Monitoring report shows a fuel saving of around 60-70 % compared to cooking on 3-stone fire. In an improved stove, 1-3 logs are enough to keep the fire running in the insulated chamber. Increased combustion temperature eliminates most of the smoke, and the rest escapes through the chimney. This is a substantial improvement compared to the traditional three-stone stove that needs 4-10 wood logs to burn properly and where heat and smoke go in all directions.

Fuel saving gives substantial economic saving and/or less time spent on collection of wood. According to the interviews with the families, the time saved from using an improved stoves is mostly used for income generating activities. Additional income and money saved on fuels is mostly used for improved diet, hygienic articles, and school materials.

Among users that have stopped using the three-stone stoves, 98% report that they previously had experienced severe negative health impacts from the smoke. After half a year with an improved clay stove with chimney, 97% reported that the negative health impact is substantially reduced or eliminated. Improved health adds to the ability to run other income generating activities.

The stoves make the kitchen cleaner, and many have used the opportunity to improve kitchen management.

In Boane District, KULIMA has been built 2,795 fixed stoves with chimney, benefiting 2,795 families and 13,975 persons from June to December 2021. The sale units in the target communities has sold 570 mobiles stoves to 510 families and 2850 persons. 5 sales agents have boosted their businesses. The above mentioned families have saved half of the money for buying fuel and the time saved from collecting firewood is used in other activities.

The main challenges are as follows:

Retrieved from "https://energypedia.info/index.php?title=KULIMA:_Empowering_Communities_with_Improved_Cookstoves_in_Boane,_Mozambique&oldid=381289"
Categories:
Cookies help us deliver our services. By using our services, you agree to our use of cookies.