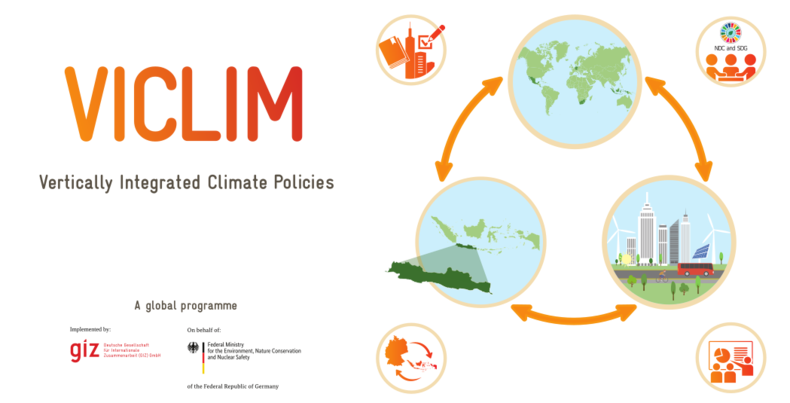 An important aspect of climate policy is the Monitoring, Evaluation and Reporting (MER)[1] mechanism for climate actions. After the issuance of Presidential Regulation No. 61/2011 on a National Action Plan for GHG Emission Reduction[2] and as part of the country’s overall national MRV-system (Monitoring, Reporting and Verification), the Government of Indonesia established a first MER mechanism for the mitigation action plans at the national and regional / provincial level (RAN-GRK and RAD-GRK[3]). The RAN-GRK Secretariat – also known as Sekran – under the National Ministry of National Development Planning (BAPPENAS) was put in charge of managing it.


At the beginning era, from 2012 to 2016, the system was rather ‘conventional’, i.e. using offline processes: the ‘Provincial working groups on GHG emissions reduction’ (Pokja RAD-GRK) – consisting of the government agencies responsible for mitigation activities in the provinces in the sectors of forestry, agriculture, energy, transportation, waste management, and the coastal and marine sector – reported their mitigation actions and basic emissions (reduction) calculations by using spreadsheet templates and sending these to the RAN-GRK Secretariat. Sekran then compiled the data from the 34 provinces, transferred the data into its own system and produced aggregated reports.


Shortcomings and difficulties of this approach became apparent. There was error-proneness due to the data transfer. There were time constraints due to long feedback loops for quality assurance. There was duplication of work. For this reason, BAPPENAS developed a web-based tool and changed, in 2017, the system to the platform ‘PEP-Online’.

Since then, VICLIM – together with a range of other international cooperation partners – has supported the implementation and use of the platform:

All things considered, the PEP-Online platform made the processes of monitoring, evaluation and reporting (MER) of mitigation actions simpler, more effective and efficient, as well as more transparent and better accessible for further data analysis. It collects in one single location all potential GHG emissions reductions of projects implemented by both, the central government and provincial governments. Therefore, BAPPENAS can regularly compile information from mitigation projects throughout the country and inform decision makers on the progresses made. With the PEP-Online website, the Government of Indonesia also increased transparency and accountability. A lot of the information about projects is now easily accessible by the public and data is exchanged more easily between stakeholders.

There are at least two main factors for the success of Indonesia’s MER system for mitigation activities ‘PEP-Online’. The first success factor is the good cooperation between all stakeholders involved. When it comes to monitoring and reporting of national-level mitigation projects, there are:

When it comes to monitoring and reporting of regional / provincial-level mitigation projects, there are:

Hence, the technical ministries at national level and the Pokja RAD-GRK are the ‘contributors’ of data. They feed the information into the system. The RAN-GRK Secretariat coordinates the data collection but also edits and quality assures information. In addition, it provides support and provides for example the standards for the GHG emissions reduction calculations. Altogether 42 methodologies in the various sectors have been officially adopted. Finally, BAPPENAS and BAPPEDA act as the ‘administrators’ with the responsibility for the final approval so that the activities from national and from provincial level respectively can appear in the system.

The second success factor is ‘learning and innovation’. Learning processes were continuously carried out in the period of 2012 to 2016 when the ‘conventional’ MER method (using spreadsheets to be filled by the Pokja RAD-GRK and submitted to RAN-GRK Secretariat) was used. Since there are 34 provinces in Indonesia and each province has at least 5 sectors in which it implements mitigation activities (incl. forestry, agriculture, energy, transportation and waste), the numbers of actions are huge. Each sector requires a reporting of their mitigation action’s information in detail. In general, the information needed consists of two sets of data: 1) general data, including name of the action, location, person in charge, and budget; and (2) technical data, including activities, emission factors, and quantity and numbers to be calculated into potential emissions reduction subject to verification.

This monitoring and reporting system had a number of weaknesses, including huge database storage, complex mechanisms, and intensive workload for the RAN-GRK Secretariat to manually compile all of the data. In addition, the data was only available within the government and difficult to be accessed by the public.

Based on these lessons, there was the initiative of the RAN-GRK Secretariat, supported by development partners, to develop a web-based MER system. This was a breakthrough to accommodate the challenges of Indonesia. Using this online system, all contributors from 34 provinces could easily report their activities from their own location by only a handful of clicks. The RAN-GRK Secretariat could also easily compile the mitigation actions with the potential emissions reduction information as regularly updated by the contributors from the provinces. As already mentioned, the PEP-Online website is also an effort of the Government of Indonesia to increase the transparency and accountability of the reporting system. The information about mitigation actions can easily be accessed by the public.

By 2019, in line with the transformation of Indonesia’s mitigation action planning to an integrated low carbon development planning approach (read more here), PEP-Online was further developed and integrated into AKSARA, the ‘Low Carbon Development Planning and Monitoring Application’. The development of AKSARA has been supported by the ‘MRV system for mitigation actions in Indonesia’ (MRV-MMI) programme[4]. Read more about the development and MRV-MMI here. A brochure with an overview of AKSARA and a description of its features can be downloaded here.

Retrieved from "https://energypedia.info/index.php?title=MER_Of_Mitigation_Actions:_Case_of_Indonesia&oldid=320028"
Category:
Cookies help us deliver our services. By using our services, you agree to our use of cookies.