Microenergysystems in the Context of Climate Change and Economical Development - A Valuable Proposition? 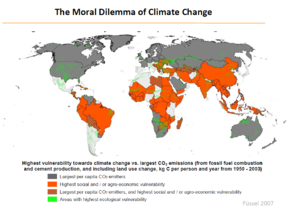 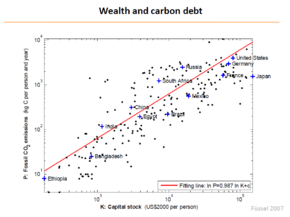 Wealth and Carbon Debt per country

Dr. Jan Steckel is one of these important researchers working on the IPCC report. At the moment the report gets updated - numbers and figures that are most recent have to be juggled.


These new numbers conclude on a well-known picture:

The grey sections in the map on the right show the largest CO2 emitters, the red countries are most vulnerable to climate change in social and/or agro-economic sectors. Most countries are either responsible for or suffer under climate change - few emitters suffer themselves. The developing countries both see the most dramatic changes of their local climats and they are also less prepared to adapt to climate changes.


It is a moral dilemma: the south suffers, the north emits the CO2 and the business as usual scenarios see an increase of emissions.

The second graph shows the correlation of the wealth of a country in US $2,000 per person and its carbon debts in kilograms carbon emitted per person and year. Countries are closely positioned around the fitting line. This suggests, that wealth and emission of CO2 presuppose each other. Further research has been carried out to see whether development has to come together with increased CO2 emissions.

Development, Emissions and their Drivers 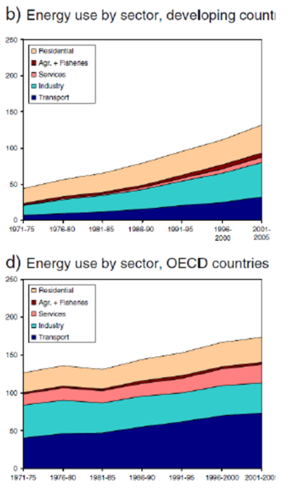 Energy Use OECD and Developing Countries


The energy ressources that supply the world with primary energy (that is electricity, mobility and heat) are shown in the graph below:

More than half of the biomass is still being used in a traditional way as for example as firewood. The modern usage of biomass as resource for biogas plants or liquid propellant already sums up to 4% of the worlds energy supply which is double the share of nuclear energy. 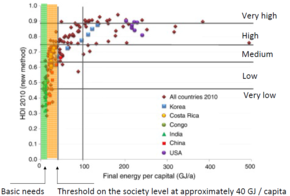 Recently, Dr. Steckel and his collegues had a closer look on the role of energy in the development processes. The graph on the right shows values of the Human Developement Index (HDI) 2010 calculated according to a new method per energy use per person in Giga Joules per year. The HDI in this graph bases on the years 1980 to 2005 and summarizes factors such as GDP, the education level, health and others. The numbers are normalized to 1, which goes to the best country. The percentage of HDI has been revised and interpreted so that:

According to Dr. Steckels research group a citizen has to use at least 15 Giga Joules per year (GJ/a) to secure it's basic needs. The threshold on the society level is at approximately 40 GJ per capita. [??] The graph shows again that it is generally necessary to spend energy to get a high HDI. Furthermore, some countries are examined closer.

The negative extreme is the Congo that has not developed its energy use over the period of 1980 to 2005 and that is still close to being classified as very low developed.

Next comes India that has developed from being classified as very low to being low developed. Its energy use per capita has slightly increased from 10 to about 15 GJ/a.

Costa Rica has risen from being classified as low to medium developed and could soon be classified as being high developed without having crossed the threshold of 40 GJ/a. This is a special case because Costa Rica is highly attractive to tourism.

China's HDI shows the most steep rise which finally in the early 2000's crossed both the threshold of 40 GJ/a and the classification line of medium developed countries. This steep rise can be explained with the big injustice in the supply with energy and wealth. The huge countries high society consumes a lot of energy but as still a high percentage lives on the countryside the energy consumption per capita is comparatively low.

The opposite extreme to the Congo is the USA which has both a high to very high ranking according to the HDI and the highest energy consumption with over 200 GJ/a. 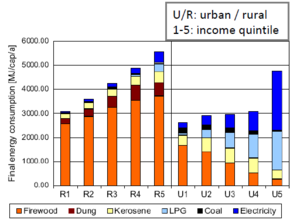 Energy Use in Developing Countries

The high share of firewood in the energy consumption of developing countries derives from the fact that 75% of people in rural areas use it for cooking, compared to 35% in urban areas. Improved cooking stoves are only used by a fourth of the households using firewood as cooking resource.

Retrieved from "https://energypedia.info/index.php?title=Microenergysystems_in_the_Context_of_Climate_Change_and_Economical_Development_-_A_Valuable_Proposition%3F&oldid=67916"
Categories:
Cookies help us deliver our services. By using our services, you agree to our use of cookies.