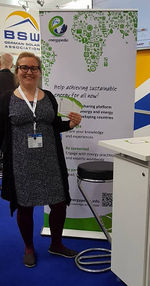 Energypedia was visible at the booth of BSW/GIZ/BMZ at the Intersolar 2017, in June in Munich. We had our roll-up with and had a number of interesting talks with potential and frequent authors! Thank you for visiting our stand and we are looking forward to the next year!

Many relevant off-grid power actors were among the over 800 exhibitors. Unfortunately, they were scattered in the 5 halls (A1-A3, B1-B2) throughout the fair. Next year, the plan is to keep the off-grid sector together in one place to even simplify the connection and cooperation possibilities among all stakeholders. Nonetheless, many interesting conversations were possible. Partly due to the meeting point at the Off-Grid Power Conference 2017 also hosted on 31st May and 1st June 2017 in Munich during the Intersolar trade fair 2017.

The German Solar Association (BSW-Solar) and its partners Alliance for Rural Electrification (ARE) and Intersolar Europe invited to the event supported by the German Federal Ministry for Economic Cooperation and Development (BMZ). It took place during the fair in Hall B1 room B11 and B12.

The conference was an opportunity for manufacturers, system integrators and project developers to meet high-ranking delegations, policy makers, investors and the international press by taking part in the Off-Grid Power Conference.

During six sessions, participants had the chance to discuss with the presenters on topics like mini-grids, investment and financing opportunities, off-grid solutions for humanitarian settings, and for agricultural purposes.

All speakers’ presentations of this year's Off-Grid Power Conference can be downloaded from the homepage of BSW (PDF-Documents).[1]

Jörg Meyer mentioned the PV milestone that one third of all globally new installed power was PV. He also referred to the BSW matchmaking platform that facilitates business contacts and deals between German solar companies involved in export and investors from around the world. At its core the platform functions as a matchmaking tool, which through targeted and freely combinable queries brings together suppliers of solar products (photovoltaics, solar thermal, electrical and thermal storage systems) and services with potential customers. The registration and use of the platform is free of charge for member companies and companies of selected partner organizations.

Ernesto Macias, ARE President was pleased with the special attention that has been given to off-grid in the Intersolar 2017, one of the largest PV trade fairs around the world. Furthermore, he mentioned the lack of coordination of initiatives as one of the challenges in the sector. However, the conference proved once again the interest in the sector and that he expects lots of discussions and experiences from practitioners from around the world. Addressing the rural electrification with smaller system is much more complicated than installing large projects. All sessions will give answers to the question “how to promote decentralised energy technologies!” He suspects that the problem is not the money, nor the technology but rather the politicians.

Jens Burgtorf explained that “decentralising is the first step” and that the BMZ has a focus on Africa whose countries could learn from the fact that the German “Energiewende” also started with people investing in solar power! National regulations and incentives made it possible that the general population could take place in a transition towards renewable energies.

This year’s edition reveals a global energy transition well underway with record new additions on installed renewable energy capacity, rapidly falling costs, and the decoupling of economic growth and energy-related carbon dioxide emissions for the third year running. But despite these positive trends the pace of the transition is not on track to achieve the goals established in the Paris Agreement. 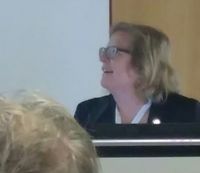 Christine Lins presented some details even before the launch in Peking on June, 7! 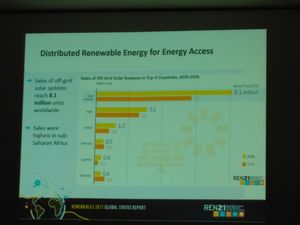 Retrieved from "https://energypedia.info/index.php?title=Off-grid_Power_Conference_at_the_Intersolar_2017&oldid=215154"
Categories:
Cookies help us deliver our services. By using our services, you agree to our use of cookies.