Before installing a photovoltaic (PV) solar home system (SHS), its size has to be calculated according to different assumptions.

The most common data for describing the local solar climate is through what is called Typical Meteorological Year data (TMY). To determine TMY data, various meteorological measurements are made at hourly intervals over a number of years to build up a picture of the local climate. A simple average of the yearly data underestimates the amount of variability, so the month that is most representative of the location is selected. For each month, the average radiation over the whole measurement period is determined, together with the average radiation in each month during the measurement period. The data for the month that has the average radiation most closely equal to the monthly average over the whole measurement period is then chosen as the TMY data for that month. This process is then repeated for each month in the year. The months are added together to give a full year of hourly samples.[2]
There is no strict standard for TMY data so the user must adjust the data to suit the application. Considerable care must be taken with sample periods. TMY data is used for a wide variety of meteorological applications and therefore a large amount of data is usually irrelevant for photovoltaic applications. Of the parameters given, usually only the time and irradiation figures are used. However, more advanced models also use the temperature and wind speed.[2]

Although TMY data is commonly used for PV system simulation, the average daily solar radiation at a location in a given month is often sufficient for a basic system analysis. This data may be presented either as measured on the horizontal or measured with the measuring surface perpendicular to the solar radiation (corresponding to a PV system which tracks the sun). In either case, an additional angular dependence to account for the tilt of the module will need to be incorporated in order to determine the amount of solar radiation available to a PV module.[3] ► Solar irradiation data from NASA and RETScreen

To size a PV system it is important to know the average power demand of its users. The power demand depends on the energy consumption of the appliances (loads) connected to the system. The more energy is consumed and the more appliances are to be connected, the "bigger" the system has to be. A higher system output can be reached by using modules with a higher nominal output or by connecting more modules to a system. Generally, it is possible to expand an installed system if the users' power demand grows. PV systems only produce direct current (DC). DC is commonly found in many low-voltage applications such as lights, radio, TV or mobile phone chargers. If alternating current (AC) appliances shall be powered, an inverter must be used to convert the DC power produced by the solar cells. Inverters are expensive, but AC systems have the advantage that AC appliances cost less than DC appliances and are readily available.

This sizing example is based on estimation, just to give you an idea about the size and capacity of a solar home system.

A Solar Home System has to be installed by a trained technician who knows how to handle its different parts. Example of solar training materials. 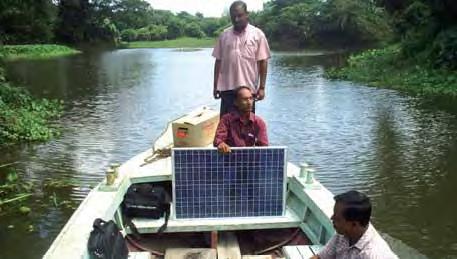 inspect it on a regular basis. Wiring and contacts have to be free from corrosion, the modules have to be intact and clean and the mounting structure has to be fastened tightly.[4] Dirt and dust on the modules lead to a lower module performance. The modules can be cleaned by the users of a PV system according to site conditions. If it rains periodically and air pollution is low, cleaning is required less frequently.[4] The maintenance requirements for batteries varies significantly depending on the battery design and application. Maintenance considerations may include cleaning of cases, cables and terminals, tightening terminals, water additions, and performance checks. Performance checks may include specific gravity recordings, conductance readings, temperature measurements, cell voltage readings, or even a capacity test. Battery voltage and current readings during charging can aid in determining whether the battery charge controller is operating properly. If applicable, auxiliary systems such as ventilation, fire extinguishers and safety equipment may need to be inspected periodically.[4] Generally speaking, flooded lead-antimony batteries require the most maintenance in terms of water additions and cleaning. Sealed lead-acid batteries including gelled and AGM types remain relatively clean during operation and do not require water additions. Battery manufacturers often provide maintenance recommendations for the use of their battery.[4]

In his book Herbert Wade comprehensively covers all aspects of Solar Energy for rural applications. He illustrative compares electricity with water in order to make Solar Energy and how it works easy to understand. This is a basic Training Manual for Solar Trainers, Teachers, Installers and everyone who works in this industry.

Retrieved from "https://energypedia.info/index.php?title=Planning,_Installation_and_Maintenance_of_Solar_Home_System&oldid=173951"
Categories:
Cookies help us deliver our services. By using our services, you agree to our use of cookies.