In 2010, 80% of Senegal’s rural population did not have access to electricity. This project promotes the use of renewable energies in Senegal’s rural electrification market. Within the public private partnership (PPP) between PERACOD and INENSUS the project aims the realisation of village electrification by means of solar-diesel-wind hybrid systems. It is financed under EnDev (Energising Development).

History of the Project

The origins of the PPP project can be traced to a business trip organised by GIZ on behalf of the ministry of economy in 2006. Several German enterprises visited Senegal and, in the aftermath, two projects materialised:

In early 2011, the PPP was awarded two prestigious awards:

Productive Use of Electricity

INENSUS produces and sells electricity in a mini-concession according to the “MicroPowerEconomy” model for a minimum of 15 years. Due to its flexible technical concept, this innovative management scheme allows a better supply of electrical energy adaptable to the users’ demand. The development of the village is linked to revenue-generating activities, which the inhabitants can now pursue thanks to electricity access as the economic growth in the village is encouraged by a stimulation of productive uses of electricity (agriculture, milling, sewing, metalwork etc.).

Supported by a system of microcredits, they can invest in electrical devices and develop their business. Being able to consume energy, they will thereby boost the economic development.

Benefits of an Energy Mix

One of the innovative approaches of this PPP is the integration of three different generation technologies (deriving electricity from a combination of solar energy, wind energy and diesel) into one minigrid.

Several benefits are meant to be realised this way:

The PPP is innovative in several aspects: 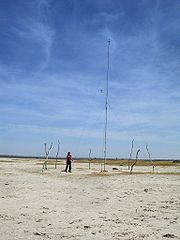 Measurement pole in the village of Sakhor in the Sine Saloum delta. The pole is 12m high and has two anemometers. Over the course of the 12-months period, it suffered from substantial corrosion due to the salty atmosphere.

In a first phase, wind measurements were taken at five villages. Four of the five sites were chosen alongside the so-called "Grande Cote" (big coast) region of Senegal, north of Dakar. This region is known for its wind potential and has been investigated for other wind energy projects as well (see a TERNA study here). A last site was chosen inland along the delta of rivers Sine and Saloum.

The wind measurements were conducted with poles of 12m that carried two anemometers, one at 7m and another at 12m height. After 12 months of measurement, the site of Sine Moussa Abdou showed the most potential: average wind speed was estimated to be 5.27m/s at the hub height of 18m (more information in this document). This village was subsequently chosen for the implementation of a pilot project.

In addition, the first phase dealt with the elaboration of a business plan and the adaptation of INENSUS’ approach to the Senegalese framework conditions.

In a second phase, the village with the highest potential, Sine Moussa Abdou, was chosen for electrification.

This part of the PPP was carried out in collaboration between GIZ/PERACOD, the newly founded INENSUS West Africa S.A.R.L. and EWE AG over a period of 18 months.

The system features the following components:

The implementation followed this rough timeline:

After the inauguration, some work remained to be done on the grid itself and concerning household installations. The project was continued until the end of 2010 and included monitoring, fostering of productive use activities, continued work with officials, and other activities.

In February 2010 the planning stage of the third phase started.

Retrieved from "https://energypedia.info/index.php?title=Public_Private_Partnerships_(PPP)_-_INENSUS&oldid=88706"
Categories:
Cookies help us deliver our services. By using our services, you agree to our use of cookies.