The electricity market of Nepal is unbundled at the generation point. Under unbundled market, more than one generation company can participate and generate power. This prevents monopoly in the generation market. However, at the distribution and transmission level, the market is bundled meaning there is only one party responsible for distribution and transmission of the grid electricity. Currently, the electricity market is dominated by the two institutions:

Furthermore, there is an important trade that forms a huge component of the market and is called “Indo-Nepal Power Trade”.[1]

IPPs generate electricity from different source and then sell it to NEA(as the market is bundled at distribution point and thus only NEA is active in distribution and transmission point). IPPs form an agreement called Power Purchase Agreement (PPA)with the NEA. [2] According to the PPA , NEA is supposed to buy electricity from IPPs once the project has been completed. The electricity buying rate is fixed between NEA and IPPs for summer and winter months. There exist two PPA rates between IPPs and NEA. The first agreement is a flat rate for all electricity projects below 25 MW. The second agreement is a negotiated rate for projects higher than 25 MW.[3] 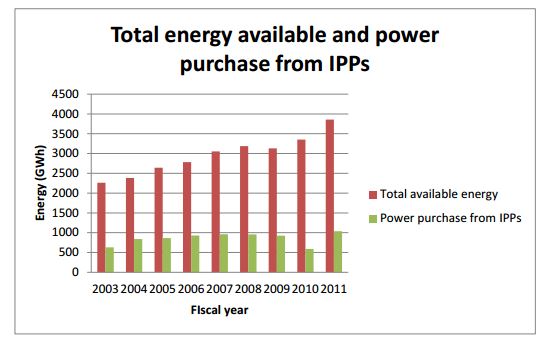 Power purchase from IPPs has increased from 27% in 2003 to 33% in 2006 and then decreased significantly in 2010. In 2010, IPPs share was only 17%. Increasing the share of IPPs generated electricity will increase help NEA to meet its electricity demand and reduce power cuts.

Challenges for IPPs in Nepal

The political climate of Nepal is very unstable with frequently changing cabinet and prime minister. This unstable government creates mistrust and insecurity among the investors. Thus, the investors do not want to invest in hydro projects that takes long time for completion. Moreover, many IPPs have also received security threats from time to time.[4]

IPPAN has been lobbying for a negotiated rate for projects below 25 MW capacities and an escalation of 5% for nine consecutive years. IPPAN has further stated that if the PPA is revised to meet these demands, 170 power producers with installed capacity of 580 MW will go into operation within 3 years. However, NEA is not ready to accept all these demands. This has created friction between NEA and IP Ps and also affected the power generation. Thus, to ensure high electricity production and supply, IPPs and NEA should cooperate and come to an agreement for the power purchase rate. [5]

Retrieved from "https://energypedia.info/index.php?title=Role_of_Independent_Power_Producers_(IPPs)_in_Electricity_Generation_in_Nepal&oldid=270614"
Categories:
Cookies help us deliver our services. By using our services, you agree to our use of cookies.