Irrigation is Essential for Food Security and Rural Development 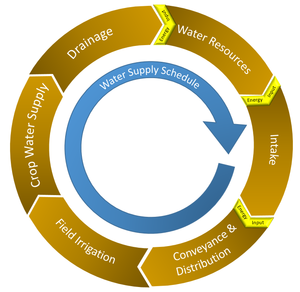 Globally, irrigated agriculture accounts for about 70 percent of water withdrawals, making it the largest water user. Irrigated agriculture provides approximately 40 percent of the world’s food, including most of its horticultural output, from an estimated 20 percent of agricultural land, or about 300 million ha worldwide (FAO 2011). Most future growth in crop production in developing countries is likely to come from intensification with irrigation increasingly playing a strategic role (AQUASTAT).

In many countries around the world, irrigation has had direct benefits on productivity and food security, typically producing food at higher cropping intensities and at least twice the yields of nearby rainfed crops (Faurès et al. 2007). It can reduce dependency on rainfed agriculture in drought-prone areas and increase cropping intensities in humid and tropical zones by ‘extending’ the wet season and introducing effective means of water control. As such, irrigation is often seen as the engine that drives rural development, producing food, providing job opportunities and generating income.

Nevertheless, irrigation has also been associated with negative environmental impacts, including a reduction in water flows, changes in downstream access to water, increased soil salinity or reduction of wetlands that provide important ecological functions for biodiversity, nutrient retention, and flood control. Related changes in land use and unsustainable resources management can lead to quality deterioration and depletion of water resources and associated ecosystems, upon which livelihoods depend.

Moreover, the water quality used for irrigation influences the yield and quantity of crops as well as soil permeability and productivity, and overall ecosystem health. Despite this, water scarcity and pollution levels are so significant in many parts of the world that millions of farmers are driven to irrigate with marginal quality water, such as urban wastewater or saline agricultural drainage water.

The impacts of climate change are already affecting irrigated agriculture as water demand is increasing, crop productivity is reducing, and water availability is becoming more limited in exactly those parts of the world where irrigation is most needed or has a clear comparative advantage.

Solar-powered irrigation is typically introduced as a new system, or when an already existing system is being modernised. In the latter case, solar energy replaces conventional forms of energy with photovoltaics (PV). Pumps powered by solar energy may be used to withdraw surface or groundwater resources.

Examining these elements, this module provides guidance on some of the key issues around planning and managing a solar powered irrigation system for agriculture.

Retrieved from "https://energypedia.info/index.php?title=SPIS_Toolbox_-_Introduction&oldid=323317"
Categories:
Cookies help us deliver our services. By using our services, you agree to our use of cookies.