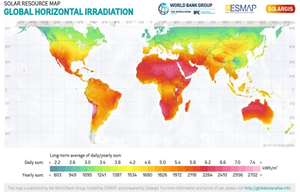 
Solar radiation can be categorized into four classes: levels less than 2.6 kWh/m2 are classified as low solar radiation while solar irradiance between 2.6-3 kWh/m2 is moderate solar radiation; irradiance of between 3-4 kWh/m2 is high solar radiation and irradiance higher than 4 kWh/m2 is very high radiation. It is important to note that the classification is used for purposes of distinguishing the efficiency of systems as advances in solar technologies have allowed for the set-up of systems in almost all areas that receive radiation. In areas of low radiation, system efficiency will be compromised due to lower panel output. Additionally, set up of solar panels in regions of low solar radiation could lead to high set up costs resulting from the use of a greater number of panels to generate the same output as regions with higher insolation. It is therefore noted that, because of technological advances, solar irradiation is more of an economic consideration than a question of technical feasibility.