According to the World Health Organization (WHO) as many as 1.9 million people die each year as a result of indoor air pollution (IAP).[1] The overwhelming cause of this pollution is inefficient und poorly ventilated cooking and heating with solid biomass. Smoke hoods are an excellent alternative to alleviate the dangers related to smoke from open fires as they draw the smoke out of the house. This makes the indoor air much cleaner and healthier.

What is a Smoke Hood

Smoke hoods consist of a main stove body, from which a flue takes the polluting gases out of a house through the roof. In many ways they can be matched to the traditional fireplaces or improved cookstoves (ICS) found in households all over the world for cooking, boiling water, lighting or heating. In hot regions, a hood made of insulating material can take away much of the heat out of the kitchen. In cold regions, the hood can be built to allow the family to benefit from the radiant heat of the fire. In both cases the hood can allow for smoking of meats or other ritual or traditional uses of an open fire. 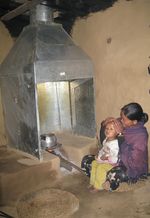 The installation of a smoke hood can be extremely effective in improving the air quality in houses. This especially applies, when traditional biomass burning stoves are being used without a chimney. In addition, some efficient stoves may not be clean and therefore employing a smoke hood allows for health benefits coupled with lower operating costs. Moreover, in some cultures, an open fire plays a special social role as a place around which the family gathers, traditional meals are cooked or other important rituals are being conducted. As a result the introduction of improved cookstoves is difficult and a smoke hood serves as the best alternative for improving indoor air quality.

Concurrently, although the health impact can be significant, the environmental impact is not necessarily reduced because - methane and other greenhouse gas (GHG) emissions are not as dramatically reduced with a smoke hood as with an efficient cookstove. However, smoke hoods can also be integrated with lower-cost, locally made, more efficient cook stoves that, combined with a well-designed smoke hood can reduce IAP up to 80%[2].

Families which are currently cooking on open fires with biomass or charcoal are the target group for smoke hoods. Specifically those families which do not wish to or are unable to adopt an improved cookstove due to cultural or other reasons. This is especially the case in regions where an open fire is used for heating or smoking purposes. And, in circumstances where low-cost efficient (but not clean) cookstoves are available, a smokehood can be combined as an integrated system to both improve efficiency and reduce indoor air pollution (IAP) at optimal cost and offering the users the greatest comfort, flexibility and overall cost-benefit.

There are different traditional and practical reasons why people are cooking on open fires:

The smoke hood technology may not be a good solution for every culture or region. The potential for an adequate cost / benefit, user acceptance and subsequent impact of introducing smoke hoods in a given setting are affected by several criteria.

Those that lead to a positive scenario include, but are not limited to the following:

The Healthy Hoods project is implemented by Bosch and Siemens Home Appliances Group (BSH) together with the Universität der Bundeswehr München (BWU) and Practical Action (PA) with support from the Deutsche Entwicklungs Gesellschaft (DEG).

The goal is to optimizing the key components in the improved cooking technology system. This included “building” a smoke hood and a fire inside of a computer and step-by-step altering the various dimensions and parameters to achieve the best possible results. Based on direct input from the field and some of the world’s leading experts, the team tried out a wide-variety of designs, shapes and sizes so that the outcomes would allow for adaptation to the wide variety of households that constitute the user-base.

The results have been dramatic. The field testing has indicated that the new design reduces indoor air pollution by over 80% - in most cases achieving WHO standards for indoor air pollution. In the location where the initial deployment has been undertaken in the Gorkha region of the Nepal High Hills, over 25% of the households in all of the villages have already placed down-payments. The project has achieved its goals for uptake 9 months ahead of schedule and the partners are now actively engaged in developing plans for significant scaling. This is despite the fact that the smoke hoods are not being subsidized in a place where many subsidized cookstoves are still on offer. Dependent upon size and location (transportation can be expensive) the hood prices range from 5600 – 6400 Nepalese Rupees (about US$65 - $75).

The project has focused not only on deploying the technology, but also establishing local manufacturing and a financing model to allow for the long-term sustainability and expansion. This has included identifying seven local manufacturers to be trained to build, promote and install the hoods. A revolving fund has been established whereby villagers are able to make an initial down-payment of 1000 Rupees and then finance the remainder over a 24 month period. The fund is managed by the local cooperatives which concurrently play a role in raising awareness and promotion of the technology.

Naturally the project partners are eager to find the resources and locations that will allow for the swiftest possible scaling-up. The project participants have decided that the priority will remain rapid expansion in Nepal while at the same time attempting to initiate pilots in other countries around the world.

To make the technology as accessible as possible, the project is also developing an interactive website: www.healthysmokehoods.org. This website offers anyone the opportunity to design their own smokehood. By providing basic data on country, household size, cooking pots and habits and special needs, a customized design complete with manufacturing instructions will be generated.

Although basic designs for smokehoods had been tested in the past, their effectiveness usually remained at around 60% smoke reduction and therefore below WHO standards. However, within the healthy hoods project a design was developed and improved design that removes over 80% of the smoke and meets WHO standards.

Earlier work on smoke hoods by Practical Action led to very well-accepted hoods in Kenya, Nepal and Tanzania. These hoods did not remove as much smoke but they illustrate that smoke hoods are appropriate across a wide range of cultures and types of climate. In Kenya, the well-known low-cost upesi stove is built under the hood in place of the open fire. The upesi is a well accepted ceramic stove which can be built into a base, with the hood set over the top to provide a neat safe environment – reducing the risk of burns and reducing the fuel costs. Another type of stove, built on a principle called a ‘rocket’ stove, is becoming very popular. This could be combined with a smoke hood, with the stove reducing emissions and fuel costs, and the smoke hood venting any residual smoke up the smoke hood. The smoke hood is sufficiently versatile to allow these changes to happen.

A successful initiative in Tanzania and Uganda involves the use of smoke hoods, combined with the installation of upesi stoves. Some structural changes included removing a wall across the door opening, and the addition of two small windows. The result is that the Maasai homes in this district have been transformed from enclosed smoke-filled kitchens to clean bright open houses.

The very low level of emissions now evident in the households is partly to do with the technology, but also perhaps because of the extreme fuel shortage. Women in this region walk for several hours twice or three times per week to gather fuel.

Key to all of this is the combination of stove and hood, and the fact that the stove can be designed to fit many shapes and sizes of stove, including locally manufactured stoves that save a lot of fuel, but may not get rid of sufficient smoke to make them healthy. Putting a smoke hood on top of such a stove allows local manufacture of a stove+hood combination that reduces pressures on forests, reducing the harmful emissions within the households, and can all be locally manufactured.

BWU was evaluating the European DIN 13384-1[3] for open fires and figured out that there are restrictions in using this for smoke hoods for developing countries. After the first computational fluid dynamics (CFD) tests was clear, that the DIN mass flow does not fit the simulated one. The reconstruction of empirical mass flow formula is not possible. In addition there is no consideration of influence of stack length and firing intensity. The DIN standard is usually applied for households with a minimum stack length of > 5m. According to the DIN institute no research has been done for fireplaces during the last years as they are not state of the art any more. The smoke hoods for developing countries show significant deviations from normal structures in Germany (considerably shorter, different conditions and materials, etc.). Thus there are difficulties with the pressure criteria arising for shorter stacks needed for small huts. Also meeting the temperature criteria is very difficult without insulation of the stack. As a result the DIN standard is not applicable and reliable dimensioning based exclusively on this is not feasible. New standards have to be developed and CFD simulation results have to be considered. The latest flow simulation methods employing CFD were used to adapt existing DIN standards of known geometry to the conditions for developing countries: 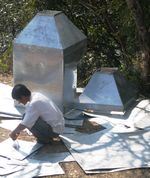 Smoke hoods need to be made within certain tolerances, but these are not so critical as for successful chimney stoves. The hoods can be made by local artisans, thus providing new employment, and support if ever things go wrong.

Smoke hoods can be made in a variety of sizes; the website tool advises on the right size for a particular situation. It provides dimensions and drawings for hood manufacture. If more than one size is feasible, thought should be given to the size of hood that will minimize wastage of steel, as the dimensions should not be substantially modified once the size is chosen.

Smoke hoods are quite expensive if you are on a very low income. However, the major problem is finding all the money at once – the up-front or capital costs. Once installed, the technologies often save fuel costs for reasons described above. One way to enable purchase of hoods is to create revolving funds. These funds are based on seed capital – an amount of money that starts off the process. A few households belonging to a community group, will buy the appliance in instalments; sometimes paying a low additional interest rate to provide a small income for the person running the fund. Once they have paid back some of the money, this provides enough funds for a few more people to get appliances. The larger the seed capital, the sooner everyone gets a chance to reduce smoke in their kitchen.

This article is basically based on experiences, lessons learned and information gathered by Bosch and Siemens Home Appliances Group (BSH) together with the Universität der Bundeswehr München and Practical Action with support from the Deutsche Entwicklungs Gesellschaft (DEG).

Retrieved from "https://energypedia.info/index.php?title=Smoke_Hoods&oldid=264440"
Categories:
Cookies help us deliver our services. By using our services, you agree to our use of cookies.