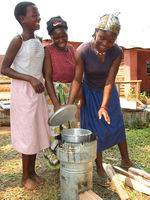 Research, dissemination, and commercialization efforts over the past few decades have brought a range of improved charcoal and also wood-burning stoves into use. Many of these stove models, as well as the programs and policies that have supported their commercialization, have been highly successful.

It is difficult to get regional or even global data on improved stoves sales or use. The Alliance for Clean Cookstoves is the only stakeholder, which is collecting such data on a global scale from her member organizations and companies.
In 2013, 14, 3 million stoves were disseminated by partners of the Global Alliance for Clean Cookstoves, including LPG stoves, biogas stoves, etc. Almost one third of them in Africa, over 60% in Asia and 6% in Latin America. Two thirds of the distributed stoves were portable.[1] In 2014, 20 million stoves and fuels were reported, out of which 12 mio. were classified as clean and/or efficient. Fuel volumes were converted into household “stove equivalents”, representing the number of households the reported volume of fuels could supply.[2]

The following text provides some definitions and explanations around improved cookstoves.

Watch the video from Ashden Awards below to get a short introduction about cooking energy and improved cookstoves.

Household cooking energy is often discussed as a “one fuel - one stove” system. The archetype of this idea is the rural household using firewood in a 3-stone fireplace. On a second look, this picture is often a drastic simplification of the reality. Many households, particularly in (peri-) urban environments, are actually using several fuels and several stoves for a variety of reasons:

Cooking energy interventions should be based on a clear understanding of the household cooking energy diversity of their target groups before activities are planned. It must be clear which part of the “traditional” (= baseline) cooking system shall be addressed.

Users not only make choices on ‘stoves and fuels’, they also decide on which meal to prepare, which cooking equipment to use and, most important, how to cook.

Thus, cooking in households is a complex system, which comprises different factors related to fuel and cooking device, as well as to user behaviour, cooking equipment and environment.

For more information read the article The Cooking Energy System.

What is a Stove?

The term ‘stove’ refers to a device that generates heat from an energy carrier and makes that heat available for the intended use in a specific application. Cook stoves are made to transfer the generated heat to food, with the purpose to get it cooked, refined etc. and therefore edible for human consumption. Thus a ‘stove’ features the combination of heat generation and heat transfer to a cooking pot if the food is cooked in a liquid, or a griddle, plancha etc. if the food is baked on a hot surface or roasted without liquid. 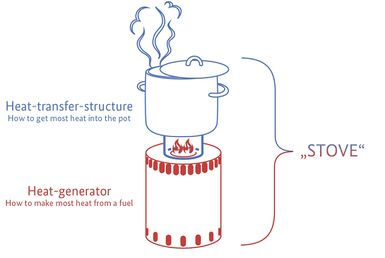 What is an Improved Cookstove (ICS)?

Cookstoves are commonly called “improved” if they are more efficient, emit less emissions or are safer than the traditional cook stoves or three-stone-fires. The term usually refers to stoves which are burning firewood, charcoal, agriculture residues or dung.[3][4]

Energy efficiency describes the heat transferred into the pot in relation to the overall energy generated by the stove within a defined task (e.g.Water Boiling Test, WBT). A higher efficiency can i.e. be achieved by:[5][6]

Specific fuel consumption describes the fuel used per unit of food cooked or boiled water, e.g. how much wood was used to cook a liter of beans.[5]

With focus on relative performances of stoves, the assessment of stove efficiency is circumstantial. A simple portable clay stove is perceived as an efficient stove in households with open fire places and as an inefficient stove in households which are using a rocket stove.
For international standards on stove quality that are currently being developed by the International Organisation for Standardisation (ISO) see the article Standards for Improved Cookstoves.

Lower emissions than baseline stoves or open fires emit are further characteristics of improved stoves. Emissions are byproducts from the incomplete combustion of fuel that are discharged into the air. They can be very harmful for human health and environment. Chimney stoves address the problem of indoor air pollution very effectively, because they lead all emissions to the outside. However, it is important to use a stove with good draft. If smoke can flow out of the fuel entrance, or leak in other ways into the room, harmful emission levels will rise. Even some stove designs have fewer emissions than others, the fuel properties still have a big influence: even the best stove can hardly burn wet wood properly.[5]

Safety can be another aspect of improved stoves. This means, for example, no open flames are leaving the stove, the stove is not easy to tip, and stove parts that need to be touched during cooking are not getting too hot and cause burnings.[7]

Improved cookstoves (ICS) can take many shapes: they can be portable or fixed installed in a kitchen; they can be made of different materials such as metal or clay; they come with or without a chimney; and they can have different sizes for households, institutions or small enterprises.

Regarding ICS for fuelwood, savings between 25-65% per stove per household are realistic when used correctly, while improved charcoal stoves usually save around 25-35% compared to traditional charcoal stoves.[8]

However, be aware that not all so-called “improved“ stoves are really saving energy or emit less harmful smokes. Sometimes, stoves that are designed to be more efficient are in reality less efficient than the prevailing technology or emit higher levels of emissions. Only proper stove testing not only in laboratories but in existent kitchens with real users (field test) can show how improved an “improved” stove really is.[9] Furthermore, over the years and with constant use, ICS can get weaker in their performance by losing efficiency and higher emissions due to bad maintenance, material fatigue and wrong usage.

What is an Advanced Cookstove (ACS)?

Advanced stoves are very high performing cookstoves, which emit very low emissions, are very efficient and also very safe in use. Basically, these are gasifier stoves and forced air stoves, both working with processed or raw biomass.[10][11]

What is Energy-Saving Equipment?

Energy-saving equipment are devices, which help reduce fuel consumption in addition to the used stove. These include hot-bags, in which food can continue to simmer and be kept warm, pressure-cookers and thermo-flasks. Find more information here.

Retrieved from "https://energypedia.info/index.php?title=Improved_Cookstoves_and_Energy_Saving_Cooking_Equipment&oldid=381742"
Categories:
Cookies help us deliver our services. By using our services, you agree to our use of cookies.