Under above's titel a master thesis in the Postgraduate Program Renewable Energy addressed the question, in which way solar energy use impacts on rural development in off-grid areas. For this a field study was conducted in the village Rema in Amhara region, Ethiopia, which utilizes for lighting, phone charging, radio, TV and fridges.

An answering approach towards the question was developed with the special focus on obtaining end-user defined impacts from solar use. According to the Indian economist Amartya Kumar Sen, development can be defined as increasing people’s choices in life, referred to as capabilities (2001). The capabilities have to be defined by the people themselves, in order to make them agents of their own lifes. Therefore, a survey using qualitative methods was conducted in Rema, asking for the impacts experienced by the end users.


The impacts found were the capabilities made available by solar home systems. Those were economical improvements, health, education, self-determined time use, changes in gender relations, social interaction, information, communication, entertainment, security, well-being and changes in the people’s state-of-mind.
The obtained categories were allocated towards the most basic or critical choices defined in the Human Development Reports (UNDP, 2003) and choices exceeding those related to basic needs (see figure). 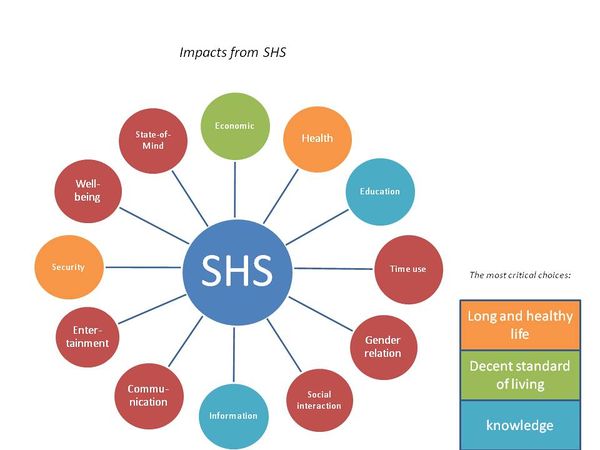 The thesis results in the conclusion, that the use of solar home systems increases the variety of user’s choices in Rema. This increase takes place for basic choices like education, health and living standard as well, as for user’s inner attitudes towards their ability to make changes in their lifes. The result can be used to develop evaluation questionnaires. For this, first recommendations have been made in the discussion part of the thesis.

Retrieved from "https://energypedia.info/index.php?title=Solar_Energy_and_Rural_Development_-_Exploration_into_End-users%27_Impact_Evaluation&oldid=81397"
Categories:
Cookies help us deliver our services. By using our services, you agree to our use of cookies.