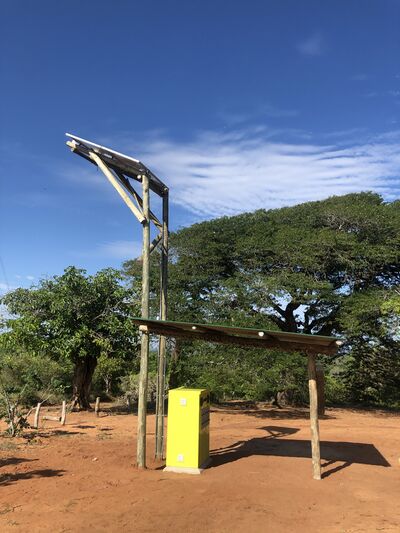 The Solar Giraffe Project is implemented by Carlos Morgado Foundation with funding from the Irish Embassy in Mozambique. It was done in partnership with the local NGO, Nyikani Mavoko Association. It also included other stakeholders such as MWE – Mozambique Women of Energy as community engagement agent and renewable energy educator while Logos Industries as solar consultant and supplier.

Mangunze, Gaza, Mozambique has been waiting to be connected to the national electricity grid for years – it’s not very far but every year ends and nothing happens. The community has turned to solar home systems and other smaller solutions for energy. Unfortunately not everyone has the capacity to invest so they rely on neighbours or spend a lot of money to charge their cell phones.

The Solar Giraffe is a standalone solution that brings community members together and while they wait for the cell phones to charge they discuss community issues and challenges under the covered space provided.

It consists of a structure to support PV panels and a roof to create a community space. The solar system powers a technical closet, under the roof, that offers 10 mobile charging outlets and a radio player. All other systems are installed to support and protect the electrical system and its users. In the future more plug-in-play solutions can be added, for instance, internet hotspot, television, computer, and others.

The original Solar Giraffe was installed with a grant but at the moment (Feb 2022) the team is negotiating with a mobile communications company to add the solution adjacent to their antennas and serve the communities.

For the consumers, currently the services are free but a pay-as-you-go solution is being studied. At the moment no financing options are available for new units.

Operation and Maintenance and Monitoring of the System 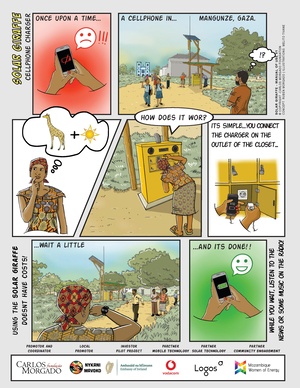 The system requires minimal maintenance because of the premium quality equipment used and operation is being covered by two trained female community members that educate on renewables and provide assistance to users.

At the moment we don’t offer any repair services nor replacement plans. The e-waste at the end of the equipment life cycle will be managed by us – we brought the equipment to the community we will take it back.

The system uses a remote monitoring system to analyse the production and use of energy while the female managers survey users per age and gender while gathering information on quantity and type of cellphones being charged.

Community Engagement and Impact on the Community

The community was very engaged in the design of the solution and responsible for some key changes that made the project more successful. This particularly community was chosen as our organization already had a relationship with then via other implemented projects.

We are charging more than 300 cellphones a month and the Solar Giraffe has become a gathering space for most youth to listen to the radio, and engaging with each other, while waiting for their phones to be charged. At night, because of the public lights installed, the Solar Giraffe becomes a safety beacon for the community.

At the moment the major challenges have been cases of cellphone theft. While we have a lockable system, theft have happened three times. Fortunately, the phones were recovered by the community. Since the second theft we adapted the closed to be more secured. No theft has happened on the solar assets. Recommendations are to not care about looks and to focus on making your solutions functional and safe.

The project was supposed to be installed mid 2020 but this is when COVID-19 pandemic started and hence the project was postponed until the end of the year. For public safety, after being inaugurated the managers of the Solar Giraffe have strict rules on using the space with mask and without large agglomeration of users undermining the potential of cell phone charging.

Retrieved from "https://energypedia.info/index.php?title=Solar_Giraffe_in_Mozambique&oldid=380890"
Categories:
Cookies help us deliver our services. By using our services, you agree to our use of cookies.