Power out of Poverty Partnership is a public-private initiative led by Netherlands Development  Organisation (SNV) in partnership with MTN Benin, the Government of Benin, local solar power companies and a local micro-finance institution.


This Partnership aims to bring modern solar power products to the off-grid population of Benin who rely on kerosene and disposed batteries.[1] 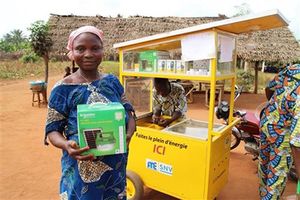 In Benin, where more than 70% of the population live off-grid, the Government is keen to get behind the project. ANADER, the government’s renewable energy agency, has agreed to waive the 40% import and duty tax for all Lighting Africa approved solar products imported under the project. “Working with SNV and other partners, ANADER’s longer term goal is to offer tax exemption for all quality solar products, to help the people of Benin access modern energy,” said Mr Orou Batta Seh Dan, Director General of ANADER.

During the first implementation phase, the project has supported 100 MTN airtime agents to invest in a new solar power business.
“Before the project, I used sell MTN airtime and some other trade goods. Now I charge 30-50 mobile phones a day, sell a solar lamp every few days, and make more airtime sales than before. My business is moving,” said MTN agent Mrs Affoussatou Gande.


MTN Benin and the Power out of Poverty Partnership have passed a milestone of  selling 10,000 new solar products sold launching nationally 6 months ago. 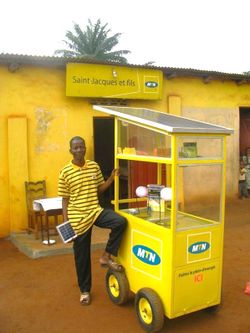 MTN Agent with Solar Cart
MTN Benin has built a reputation across Africa for supporting solar market development with the help of their distribution channels. “This initiative is perfectly aligned with MTN’s philosophy of doing good business as a corporate citizen; improving the livelihoods of its customers, reducing the use of unsafe and polluting products as well as helping MTN expand its services,” says Mr Nicolas Gomez, Head of Corporate Services.

SNV’s role in the partnership is one of market catalyser; bringing in the various partners together, providing training where needed, facilitating access to finance and supporting the supply chain actors in doing good business together. SNV’s goal is to scale up to 500 MTN agents nationwide, providing accessible solar power sales points to more than 2,000 off-grid villages in Benin.