The use of solar energy to generate heat is a well-established technology that has been used for decades. However, Solar Water Heaters are more frequently used in some regions of the world than others.

Worldwide, SWH applications differ. The figure below shows that globally approximatly half of the World's installed capacity is for larger domestic SWH (red bars) and the other half for smaller SWH (orange bars), with swimming pool heating (purple bars) and sophisticated SWH-combi systems (blue bars) playing only a minor role. 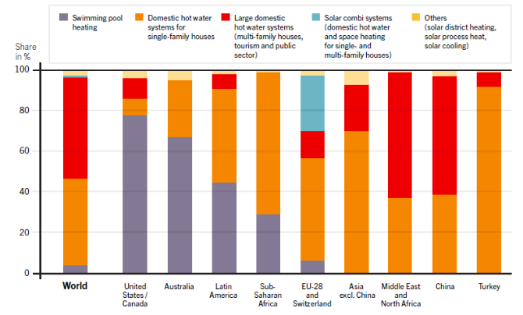 The use and outreach of solar thermal energy differs significantly across Latin American countries. Some countries play a global role, while others have only a limited installation of solar thermal applications.

In absolute numbers, China is by far the largest national market with 40.3 million MWth being installed in 2011 alone. Between 2001 and 2011, the market grew an average of 21.5% annually.[2] The majority of China’s installed solar heaters are made up of small water tanks and panels installed on residential buildings The IEA projects that China’s solar heat usage will grow up to 450% by 2035 in the New Policies Scenario. Absolute growth will be significant as solar water heating already covered over 3% of the residential water heating demand in 2011. The future market potential is subsequently very large). The success of Chinese solar water heaters can be attributed to firm and consistent long term national goals for installation targets, tax rebates or exemptions, preferential pricing and credit guarantees.[3]

India’s solar industry is growing fast,  increasing from 1050 MWth in 2006 to 3347MWth in 2011 and ranking amongst the top five growth markets in the world before the Solar Thermal Energy Programme which subsidized SWH was discontinued in 2014.[4] The SWH market penetration in 2011 was 2.74 kWth/1000 inhabitants. While the SWH market is still growing, the solar industry is currently more focused on photovoltaics.

State and local governments are currently utilizing instruments such as property tax breaks and subsidies to support SWH development and it is estimated that India could install up to 36 million m2 of residential SWH by 2020 as a result.  The Indian Renewable Energy Development Agency (IREDA) is also helping to increase SWH through low interest loans.  IREDA, on-lends the funds to designated financial institutions which then extend concessional loans to finance SWH installations.[5]

It should also be noted that the use of SWH throughout India differs from regions to region. Ladakh is one region in India that has a particularly high SWH usage with 40% of its population is now using solar water heaters in their homes.  This instalment was promoted by the regional government who cover between 40 and 90% of costs resulting in the installation of 17,584 m² of solar collectors and 2,160 solar steam cooking systems. Schools, residential homes and hotels receive a 50 % subsidy for solar equipment, whereas government offices can receive up to 90%.[6]

Thailand currently utilizers SWH technology, however, the industry it is by no means exhausted. Solar thermal energy is promoted through government initiatives which are largely focused on businesses. This is reflected by 40% of new systems being installed in the industrial sector. The growing number of hospitals and large hotel complexes is also increasing the potential market for solar thermal applications.[7]

SWHs are a major solar energy application in the MENA region. The Regional Center for Renewable Energy and Energy Efficiency (RCREEE) supports SWH and convened the Solar Thermal Applications Workshop which showcased potential tools that businesses and governments can utilize to enhance SWHs markets. It has been shown, however, that the SWH market in the Mena region is still relatively weak due to the lack of the implementation bodies and active communication between stakeholders. [8]

In 2012, the ECOWAS member States adopted the ECOWAS Renewable Energy Policy (EREP), with the target to equip around 50 per cent of all health centres, as well as 25 per cent of all hotels and agrofood industry facilities with hot water requirements with solar thermal systems by 2030.

For more information of ECOWAS see the below links:

The use of solar energy for thermal purposes is widespread in Tunisia and can be regarded as a success story. Since its launch in 2005, the ANME program “PROSOL THERMIQUE”, meant to promote the installation of solar water heaters, has led to an installed capacity of 816,000 m2 in 2015. PROsol has provided SWH to 450 companies in the tertiary sector (hotels, swimming pools, hammams, etc.) via loans. It grants five years to pay back the loan through their monthly STEG electricity bill, which is a key success factor of the financial scheme, because it is a relatively reliable method of refinancing the thousands of loans.

PROSOL’s effects on the Tunisian market as follows:

Furthermore, the Prosol programme is financed through avoided fossil fuel subsidies that are more than covering government support for SWH.

While SWHs in Ethiopia were initially manufactured locally, the current supply is entirely based on imported products as the local market could not compete with the cheaper but higher quality imports. Technologies range from flat plate collectors to evacuated tube with heat-pipes (most common) with the majority of SWHs being found in larger cities such as Addis Ababa. The current demand for SWH is relatively low, however, it is continuously growing, especially within the residential sector. There were 5000 SWH units (10,000 m2) as of 2009. The absence of enabling policy, inexpensive grid electricity (less than USD 0.06/kWh domestic tariff 2009) along with a relatively small market volume (of approximately 1000 units per annum) is potentially too small to attract investment. However, the market is slowly but steadily growing.[9]

The potential for growth within Kenya’s SWH sector is excellent, for both household and commercial units. A significant portion of SWHs were previously manufactured locally, often with mixed quality and a poor reputation.  However, as of 2009, there were two predominant operator models:

In 2009 it was found that Kenya had a potential market for 100,000 SWH among small consumers alone. In 2008, between 8,000 and 10,000 m2 were installed. Not only this, but there is also a large market potential within the hotel industry with an addition installation potential of 6000 SWH. This SWH progress is partially due to the increasing electricity prices and to Government support which is spurred but the fact that SWH can help reduce peak load. Legislation has been drafted that requires all newly-built residential and commercial institutions to install solar water heaters. However, as of 2009 this legislation was yet to be passed.[10]

The primary source of energy for hot water in Rwanda is electricity. However, the use of electricity for water heating is extremely expensive. It is often the most expensive part of a business’ or household’s electricity bill and as a result many households, hotels and institutions pay very high electricity tariff rates (up to USD 100 per month). Despite this, only a few SHW providers existed in Rwanda as of 2010 and the market was only in its early stages.


As a result prices for SWH are high and as of 2010 the only two primary markets were private households and tourism. The government has plans to introduce legislation to ensure that all new buildings have SWHs in their designs but the legislation is yet to pass.[11][12]

Even though SWHs had been sold within Tanzania for twenty years the SWH market was relatively undeveloped as of 2009. The majority of the SWH units are imported with only a small handful of local suppliers. It was estimated that less than 500 units were installed in Tanzania by local companies in 2008.

Although the SWH market is largely underdeveloped, many energy providers mentioned an increasing interest in solar water heaters, particularly from the institutional and hotel sectors. Although electricity prices are increasing at a steady rate, the household market was also found to be undeveloped. This was partly due to hot water not being a priority to many middle class households in humid Dar es Salaam.

The Tanzanian government supports solar water heaters and as a result there are no duties or VAT on solar water heater systems. However, as of 2009, there were no specific SWH targets, legislation or standards.[11]

Nigeria’s SWH market development is relatively low with grid electricity, kerosene, cooking gas and generators being the main sources of energy for water heating. This was deemed to be due to the low electricity tariffs in Nigeria, limited cost savings associated with the installation of SWH for domestic use and a lack of awareness about the technology.

It was shown that there was more potential for SWHs to be profitable for hotels with a payback time of between 3 and 10 years. However, However, the decentralized water heating systems used by most hotels mean the barriers for SWH is still relatively high.

While domestic hot water consumption is increasing, it is believed that government incentive on solar water heaters including: incentives, grant, and financing models, are needed to attract potential users.[13]

Table: Overview of IEA Reports on SWH markets and costs in various countries.[14]