The Role of Trade in Marketing Rural Products

► Back to Mobility Portal

Trade has an important role to play in marketing rural products beyond regional and national borders.The sales markets for rural products vary considerably according to the country and product. Transportation and being connected to the road network is a very important location factor. The following article shows the role of trade beyond regional or national borders for both food and products of rural non-farm economy. Moreover, the influence of non-tariff trade barriers is eplained. For many developing and newly industrialising countries these include (illegal) roadside controls and charges and time-consuming border crossings. The possibility of monocultures with their accompanying ecological problem.

The Role of Trade in Marketing Rural Products

The sales markets for rural products vary considerably according to the country and product. In most of the Least Developed Countries (LDCs), trade beyond regional or national borders is relatively unimportant. In many emerging economies, on the other hand, and especially in Asia, the rural economy is very much oriented towards international markets. This applies both to agricultural products such as rice and fruits and to non-agricultural products of the rural non-farm economy (RNFE), such as textiles. Trade relations are usually characterised by two specific features. Firstly, export, or marketing outside the producer’s region, is rarely carried out by the producers themselves; it usually involves intermediaries or – in the case of suppliers and contract farming – the parent company. Secondly, goods are usually transported via hubs situated near cities.[1] 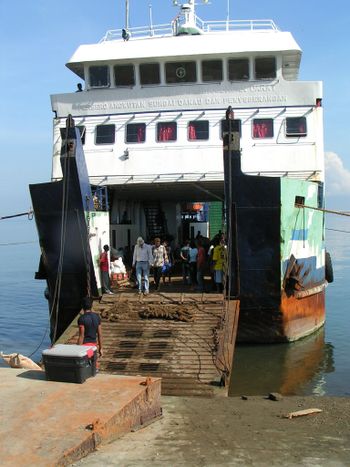 Ports and sea routes are vital to trade: a ferry in East Timor. Photo: Manfred Breithaupt, 2005.

Vietnam and Thailand constitute striking examples. A company survey (part of the DFG FOR 756 research project, University of Giessen, 2007) conducted in seven rural provinces of Thailand and Viet Nam highlights the importance of markets outside the home region for the economies of the two countries.In particular, companies involved in processing agricultural products from the region have a relatively high export rate. In 2007 in Thailand a 30,4 percent of the food production were exported abroad, in Vietnam a 48,7 percent. In both Thailand (rice) and Vietnam (coffee), agriculture tends to focus on certain products for which there is strong demand abroad. The textile firms, by contrast, are frequently producing goods for foreign companies; this situation is influenced by the lower wage costs in rural provinces and the attempts being made to promote rural industrialisation. In 2007 A 61,8 percent of the produced textiles and clothing in Vietnam was exported abroad.

Being connected to the road network is the most important location factor for companies in both countries. Companies in Thailand have the benefit of good-quality roads; in many parts of Vietnam, by contrast, the road system still needs to be improved. In both countries, though, there are long distances to be covered before goods can be exported. Exports usually pass through one of the major ports near Bangkok or along the Vietnamese coast. Where export is not arranged by the parent company, transport is usually organised by intermediaries. Agricultural products are typically exported after processing and not by the producers themselves.[1]

The conditions for regional and international trade have only an indirect bearing on the rural economy. However, they can affect the sales potential of rural products and bring about structural change in rural areas. From the perspective of transport, important aspects of trade are not just the state of the infrastructure and the existence of an advanced logistics sector: an even more significant factor is the influence of non-tariff trade barriers. For many developing and newly industrialising countries these include (illegal) roadside controls and charges and time-consuming border crossings. The regular surveys conducted by USAID in West Africa (UEMOA 2012) reveal the additional costs caused by such delays, using different goods chains as examples. For example, drivers transporting millet and sorghum along the corridor stretching 1,800 km from Koutiala (Mali) to Dakar (Senegal) must reckon not only with significant delays but also with the need to pay bribes totalling US$467. These additional transport costs must ultimately be borne either by the consumer or by the rural producers.[1]

In the port sector, too, slow clearance procedures, inefficient market structures and corruption are major obstacles to efficient logistics. Exports (and also imports) are heavily dependent on ocean transport. Turnaround times for containers are particularly poor at ports in sub-Saharan Africa: in most European and Asiatic ports containers spend less than a week in port, but in Douala (Cameroon) the turnaround time is 19 days and in Dar es Salaam (Tanzania) it is 14 days (Raballand et al. 2012). This highlights the fact that in many places it is important to focus on sectoral reform and better cooperation between the public and private sectors rather than solely on investment in infrastructure. However, Africa’s busy ports are also hampered by a shortage of handling terminals and technology and poor links with the hinterland.[1]

Monocultures, Land Grabbing, Emissions: The Downsides of Export-oriented Development of the Rural Economy

Opening up rural areas by improving the transport infrastructure and linking communities to hubs and trade corridors can boost the rural economy. At the same time, however, the possible economic gains must be weighed carefully against the social and environmental drawbacks. Export-oriented agriculture is frequently based on large-scale monocultures with their accompanying ecological problems. Contract farming that links smallholdings into larger plantation systems has the potential to boost development in rural areas, but the underlying contracts must be clearly worded and advantageous to both parties and must take account of both economic and social concerns. The transport of goods over long distances raises concerns from the perspective of climate change mitigation. The impacts of investment in transport infrastructure must therefore always be examined on a case-by-case basis (see also Section 2.3)[1]

Retrieved from "https://energypedia.info/index.php?title=The_Role_of_Trade_in_Marketing_Rural_Products&oldid=83214"
Categories:
Cookies help us deliver our services. By using our services, you agree to our use of cookies.