The Environment and Safety: Adverse Effects of Transport Infrastructure

This articles gives an overview about negative effects of transport infrastructure focusing on environmental aspects, the spread of HIV and accidents.

Effects on the Environment

The construction of transport routes in rural areas opens up access to previously remote ecosystems and thereby facilitates the clearance of forests, much of which is carried out illegally. Studies show that around two-thirds of all forest clearance can be attributed to the construction of transport infrastructure. The accompanying problems include noise nuisance, air pollution and higher numbers of accidents.

In addition to facilitating illegal logging, the increased accessibility provided by transport routes and the accompanying reductions in transport times and costs also put indigenous peoples at risk, provide easier access for poachers and promote land speculation, the construction of illegal settlements and uncontrolled exploitation of minerals and natural resources.[1] Illegal mining activities destroy farmland and create disorder in rural areas, disrupting both the physical and the social fabric of communities. In the southwest of Burkina Faso, for example, laboriously rehabilitated farmland is being ruined again by unregulated gold mining. In this context it is also worth pointing out that the construction of transport routes can also change land-use conditions to the disadvantage of the resident rural population. For example, road building can provide momentum for negative impacts such as land grabbing or forced displacement of the resident population, perhaps to land that has not yet been made cultivatable. [2] [3]

Transport projects that connect corridors or countries also help to accelerate the spread of disease. Particularly noticeable is the spread of HIV as the virus is exchanged between local people and lorry drivers or construction workers, who often spend a long time living away from their families. For some poor rural dwellers, prostitution with the relatively affluent lorry drivers is an important source of income that enables them to feed their families. According to a study conducted by the World Bank in South-East Asia, up to 80 per cent of long-distance lorry drivers regularly use the services of prostitutes (World Bank).[3]

Road crashes now kill 1.3m people a year, more than malaria or tuberculosis. On present trends, by 2030 they will take a greater toll than the two together, and greater even than HIV/AIDS (see article). The vast majority of victims die in poor and middle-income countries—1.2m in 2011, compared with 99,000 in rich ones. For every 100,000 cars in the rich world, fewer than 15 people die each year. In Ethiopia the figure is 250 times higher.

Young and socially disadvantaged people have a higher than average risk of being involved in road accidents; where someone lives is also a key factor in their accident risk. Infact lately the term road accidents is rather replaced with road crahes as factors contributing are predictable and hence aviodable.Studies of the Bangalore area of India show the risk of being killed in a road accident is three to four times higher in rural areas than it is in urban districts. One reason for this is the tendency of drivers to over-estimate their skill and to drive excessively fast outside built-up areas. When an accident occurs in a rural area, medical assistance is often a long way away and is rarely up to the standard available in towns and cities. Accessing medical care or paying for a funeral as a consequence of a traffic accident often plunges entire families in developing countries into significant financial dependency (WHO 2009).[3] 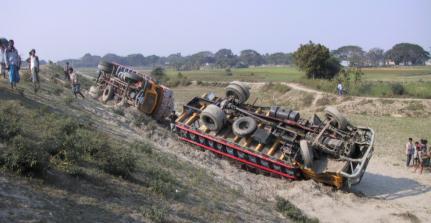 Road accidents are among the most serious impacts associated with increased traffic volumes: an accident involving two lorries in Bangladesh. Photo: Rainer Kuhnle, 2001

According to the World Bank Report, "The poorest communities often live alongside the fastest roads, their children may need to negotiate the most dangerous routes to school and they may have poorer outcomes from injuries, due to limited access to post-crash emergency healthcare," the report says.

Some of the expected outcomes in the global plan for decade of action for road safety: post-crash response, is to increase responsiveness to post-crash emergencies and improve the ability of health and other systems to provide appropriate emergency treatment and longer term rehabilitation for crash victims.

The examples of negative external effects have demonstrated that these effects must be considered right from the start when transport projects are being planned. The relevant impact assessments are now standard in financial cooperation projects. Support measures should be offered, and the implementation process should include everyone affected or involved – the rural population, decision-makers at national and district level and local people. Specific roles, responsibilities and tasks can be assigned and stakeholders can be supported through training and advice. For example, young people can act as school crossing patrols, workers can be responsible for the distribution of information materials at payment points and lorry drivers can help pass on these materials. Local and national government offices have a part to play in planning and implementing measures that affect land use, compliance with legislation, transport planning, capacity development of village and community structures and the use of natural resources.[3]

Retrieved from "https://energypedia.info/index.php?title=The_Environment_and_Safety:_Adverse_Effects_of_Transport_Infrastructure&oldid=83668"
Categories:
Cookies help us deliver our services. By using our services, you agree to our use of cookies.