Uzbekistan is located in the heart of Central Asia. The physical environment is diverse with flat desert covering 80% of the country and mountains in the east reaching over 4,500m high. Shrubland and savannah comprise 47% of the territory and 27% is comprised of cropland. It's climate is mainly continental with the average low temperature being 8.3°C and the average high temperature being 21.0°C [1] Uzbekistan natural resources include natural gas, petroleum, and coal. Roughly 8.0% of Uzbekistan's land is covered by forest. The annual deforestation rate (between 2005-2010) was 0.12% [2]

Uzbekistan is Central Asias most populous country with a population of 28 million inhabitants. 63% of the population lives in rural areas and 37% in cities. The GDP in 2010 was 39 billion US$ and and GDP growth over recent years remained at high levels of 7 to 9%. GDP per capita in 2010 was 1,400 US$. National income sources comprise of the following shares: agriculture (44%), industry (20%), and services: (36%) [3] Uzbekistan's literacy rate is 99%. However, poverty is prevalent as 45% of the population lives on less than 1.25 USD per day.

Uzbekistan is one of the few countries which are fully self-sufficient in energy resources. It is the second largest of the Caspian gas producers (after Turkmenistan) and its abundant natural gas resources are used both for domestic consumption and export. [4]
Oil and natural gas comprise 97% of the country's energy balance. Primary energy shares consist of 86.3% gas, 1.9% hydro, 2.5% coal and peet, and 9.3% crude oil.

Uzbekistan is the largest electricity producer in Central Asia. Total national electricity capacity is 12.6 GW (as of 2007), of which 88.5% is provided by thermal power plants and 11.5% by hydropower plants. The price of electricity runs at 3.5 US Cent/kWh.

The national electrification rate is 94.4%, but electrical supply to rural areas is unreliable and of low quality. There are often power blackouts that last many hours per day. Renovating the power transmission networks is one of the energy sectors priorities.

A National Energy Efficiency Strategy has been in place since 2001. Besides international initiatives, a campaign has been carried out to install meters for consumers of natural gas and hot water. As a result, energy intensity of GDP decreased by 10%, from 0.96 kgoe/$ in 2000 to 0.86 kgoe/$ in 2004, still considerably high levels. There is also an Energy Efficiency Programme for the period to 2010, targeting 50% energy savings in the household and utility sectors. 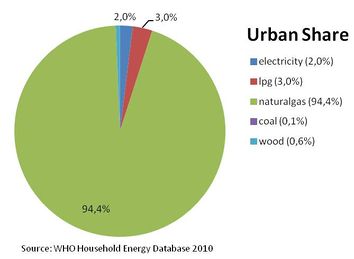 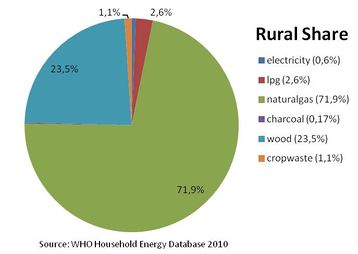 Impact of use of solid fuel on health

Due to its abundance of energy, the development of renewable energy is not a high priority for the Government of Uzbekistan, except hydro power. Uzbekistan has 18 large hydroelectric stations.

High start-up costs, low gas and electricity prices, and the lack of renewable energy promoting policies are reasons for the limited use of renewable energy sources. Nonetheless, a law “On Renewable Energy Sources” has been drafted. The national strategy on the development of RES is being formulated with the assistance of UNDP.

Uzbekistan's climate conditions favor solar energy. There are 250 sunny days per year and the technically feasible potential of solar energy is 177 million toe (2 million GWh), which is much more than the national annual consumption. However, this potential energy source remains largely untapped due to high start-up costs.

Uzbekistan also has a high potential for biomass energy generation as it is the fourth largest producer of cotton in the world. However, fuel wood is not a prospective option for energy production because Uzbekistan has very little forest coverage.

Significantly, Uzbekistan has initiated 79 CDM project proposals of which 59 have already been approved.

Retrieved from "https://energypedia.info/index.php?title=Uzbekistan_Energy_Situation&oldid=264324"
Categories:
Hidden category:
Cookies help us deliver our services. By using our services, you agree to our use of cookies.