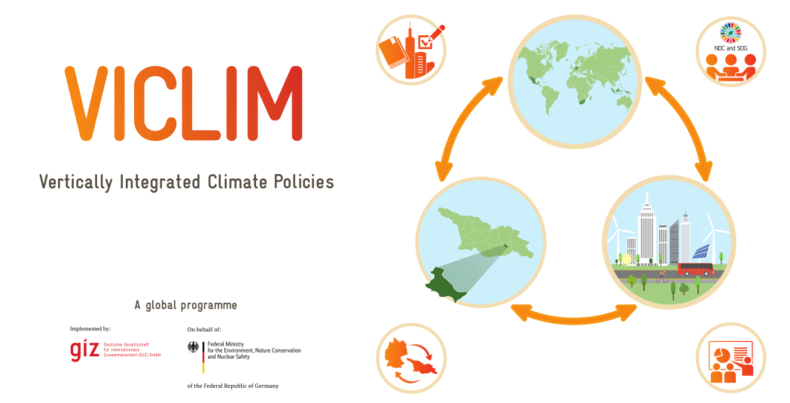 In its (I)NDC[1] document – submitted to the United Nations Framework Convention on Climate Change (UNFCCC) in 2017 – Georgia highlighted the importance of contributions by municipalities in order to reach the country’s overall greenhouse gas (GHG) emissions reduction targets: “It is envisaged that the most intensive pre-2020 mitigation action in Georgia should be the voluntary reduction of GHG emissions committed by thirteen self-governing cities and municipalities [having joined] the EU initiative ‘Covenant of Mayors’ (CoM). Further facilitation of this initiative will [also] significantly contribute to post-2020 [mitigation action].”[2]


This ‘voluntary reduction of GHG emissions’ are found in the ‘Sustainable Energy Action Plans’ (SEAPs) that these thirteen cities and municipalities had developed since 2010[3]. The plans contain mitigation measures in the sectors of transport, buildings, street lighting, waste management, and urban greenery. At the beginning of the 2010s, the political interest at local level in the objectives of the CoM was high because it was a new European initiative and there were the expectations of attracting finances (grants) within the CoM framework and from other donors. As a matter of fact, “municipalities (including large cities such as Tbilisi and Batumi) face severe financial constraints to improve environmental quality and efficiency of infrastructures such as public transport and buildings. The municipal budgets are generally too tight to meet all their investment needs for infrastructure and public services. As a result, public infrastructure investment generally requires allocation of the central government budget and increment finances from multilateral or bilateral sources”[4]. So, in the following years after 2010, some donor-funded projects allowed for implementing some selected measures, e.g. efficient outdoor lighting projects, improvement of public buildings’ energy efficiency, and upgrade of public transport. There was, for example, USAID’s Enhancing Capacity for Low Emission Development Strategies (EC-LEDS) Project[5].

Potentials and barriers for local and vertically integrated climate action

In 2018, a study[6] among the four biggest cities in Georgia (Tbilisi, Batumi, Kutaisi and Rustavi) – conducted by the VICLIM project – revealed that, in addition to the above-mentioned financial constraints, the cities still face various challenges in implementing their SEAPs and climate action in general:

In order to tackle these challenges, the study gave a list of recommendations and ideas for further interventions, such as:

One approach by VICLIM was to work towards a ‘mainstreaming of climate change mitigation’ into local service delivery. As mentioned above, the municipal budgets are tight, and municipalities struggle with meeting all investment needs for infrastructure and public services. As a result, public infrastructure investment generally requires allocation of the central government budget. One of these allocations is the Regional Development Fund (RDF) under the Ministry of Regional Development and Infrastructure (MRDI). It provides municipalities with finance for improving their local services, and they use it mainly for projects of rehabilitation of local roads and bridges, street lighting, water supply systems and kindergartens, and improvement of municipal waste management[7].

Looking into the nature of these projects, it is apparent that they are strongly connected with opportunities for mitigation, because – depending on how they are executed and what various objectives they can pursue – they have an effect on GHG emissions. Therefore, VICLIM, together with the Ministry of Environmental Protection and Agriculture (MEPA), the MRDI and the Energy Efficiency Centre of Georgia (EEC)[8] trained representatives of municipalities and cities (Deputy Mayors and technical staff from infrastructure departments) on these opportunities, the advantages of more energy efficient, sustainable and resilient approaches for municipal services, and how to consider them in projects for which municipalities apply for RDF funding:

The participants got inspiration from successful energy efficiency[9] and small-scale renewable energy supply measures in municipal buildings (such as city halls, kindergartens, culture and sport facilities) and infrastructure (such as water supply systems and street lighting) in Georgia as well as Germany[10]. The reduction of GHG emissions through savings in the electricity or heat consumption were presented.

A key input of the training was also to show the financial benefits. The participants got a better understanding of what the ‘life-cycle costs’ of an infrastructure are, how these costs can be assessed, and which conclusions can be drawn up. They jointly calculated the amortisation time and the financial wins for the municipal budget (through reduced running costs) for sample investments such as LED street lights, rehabilitation of public buildings considering renewable energy (RE) and energy efficiency measures (EE) etc.

Cities and municipalities should take up the opportunity of setting a good example. They should outperform existing standards (e.g. for energy efficiency), with the confidence in long-term financial, social and environmental wins.

The national level, particularly the RDF, should ensure an enabling framework for the cities and municipalities:

It is important to mention that at national level, there are promising developments. In line with the ‘EU Association Agreement’ and the ‘Energy Community Membership’, Georgia pursues to align its national legislation to EU directives such as the ‘Energy Performance of Buildings Directive (2010/31/EU)’. It indicates that all new buildings meet minimum energy performance requirements. At the first stage, the requirements refer to governmental (national and local) buildings and later to the private sector, too. It also relates to measures for renovating the building stock. Therefore, Georgia has prepared drafts for 1) a ‘Law on Energy Performance of Buildings’, 2) the ‘Energy Efficiency Law’ and 3) the ‘Law on Energy Labelling’ in order to transpose the energy efficiency acquis into its national legal framework. The expectation is that all three laws will be soon adopted.

A Cycling Strategy for Rustavi

‘Transport’ is one of the key sectors, in which high potential for GHG emissions reduction can be tapped. Furthermore, ‘transport’ is a sector, in which cities and municipalities have a relatively large sphere of responsibility and of influence over measures. In 2015, road passenger transport, including private light duty vehicles and bus transport, accounted for the majority of current sector GHG emissions (≈60 %), with freight and off-road machinery accounting for 28 % and 12 %, respectively. Overall, the transport sector accounted for ≈24 % of GHG emissions in 2015. Therefore, in the SEAPs too, measures in ‘urban transport’ play a key role to meet the GHG emissions reduction commitments.

One of the measures aiming at a sustainable urban transport is the development and promotion of cycling as a key mode of transport in a city or municipality. Cycling has many advantages:

Even though cycling isn’t well developed as a mean of urban mobility in Georgia, it has quite a long history in the country. Georgian intellectuals were always fascinated by the western values and lifestyle. That’s why they always tried to implement them in Georgian society. It is worth to mention that the Pierre Michaux bicycle first was introduced in Georgian society in 1889 by well-known public figure Mr. Niko Nikoladze[12].

VICLIM supported the city of Rustavi in the development of a Cycling Strategy. This document now provides the city’s development with a vision and strategic pathways towards:

Now it is up to implementation. And here as well, it is up to ‘mainstreaming’, to integrate the works towards the envisaged cycling network into other activities. One of the main projects funded through the Regional Development Fund (RDF) is the rehabilitation of municipal roads. Though the RDF does not support cycling infrastructure development explicitly, road rehabilitation projects should be used for installing cycling infrastructure (in almost all the parts of the network by simple markings thanks to broad streets) and for making changes of the carriageway towards a sustainable transport system.

The example of the ‘Rustavi Cycling Strategy’ shows what can be done when leadership, willingness and a vision at the local level is there. The example shows how (national) NDC implementation can start with small-scale activities at the local level. The implementation of the Rustavi Cycling Strategy will of course not increase the use of bicycles from one day to the other, but in the long run, and in case of replication by other cities, it possibly can trigger a change towards sustainable and healthy urban transport systems.

It was promising that local governments, by joining the Covenant of Mayors, committed themselves to emissions reductions and developed SEAPs in order to achieve their commitments. It was also promising that the national level appreciated this step and included it into its own commitments at the international level, i.e. in its NDC. However, this was not yet an institutionalised cooperation across the levels of government. Therefore, when the Ministry of Environment and Agriculture (MEPA) started in 2018 to develop the National Climate Action Plan (CAP)[13], it ensured from the beginning the involvement of cities and municipalities. In the course of 2019, the technical working groups for the sectors of Energy Generation and Transmission, Forestry, Buildings, Waste Management and Transport met. Representatives of the biggest cities, ‘CoM Supporters’, representatives of the Ministry of Regional Development and Infrastructure (MRDI) participated in the group meetings together with the respective sectoral ministries, independent experts and civil society stakeholders. In addition, draft sectoral mitigation measures were sent to the municipalities for comments. In 2020, the CAP shall be finalised.


This process is a prominent example of vertical integration of sub-national actors into national mitigation related policymaking. Without this strong commitment from the central level to involve municipalities in national policy development, there will be less effective climate change mitigation activities.