The first step towards a watershed action plan is an Environment Assessment, which includes the selection, compilation and mapping of data on the watershed, with the aim to show its current environmental condition. The implementation of Environment Assessment helps to identify any existing environmental impacts and thus what mitigation techniques need to be implemented within the watershed action plan.

In order to assess as much environmental information on the target area as possible, it is important to consider both, biophysical as well as socio-economic features of the watershed. The most effective way to do so is a combination of landscape observation, interviews and mapping. A checklist and questionnaire help to note down the findings of the landscape observation and the interviews. Maps help to illustrate the environmental condition of the watershed and thus to locate points of interest such as degradation features, wetlands and spring areas.

[edit] How to Use the Questionnaire and the Checklist

The checklist and the questionnaire include a variety of questions and features, all of them having different answer modalities (ranging from qualitative to quantitative). In order to fill in the questionnaire and the checklist it is thus of great importance to not only observe the landscape and to take measurements but also to interview people (inhabitants and/or officials) when required. To make the results of the survey more detailed, the watershed should roughly be divided into (at least) two parts: the upstream and the downstream region. Depending on the size of the watershed, further subdivision might be useful. For each sub-region the questionnaire and the checklist should be filled in.

[edit] How to Draw a Map

To calculate the area of the watershed, use a grid square (print it on a foil and lay it over the map, see fig. 4). In order to map parts of the watershed in greater detail, the map can be further enlarged[1].

Once the base map is drawn in accordance with the work scale (depending on how detailed the map must be), all information of interest (land use, land cover, springs, wetlands, rivers, degraded areas, infrastructure, slopes, soil texture and other) can be filled in (see fig.5). If there is no GPS available, landmarks such as rivers that are found on the topographic map can be used for orientation. Either all information can be noted on one map, or several thematic maps can be created, showing for example only springs and wetlands or degraded areas.

Once the biophysical and socio-economic survey is done, the watershed planning team should analyze the collected data carefully in order to assess major problems and problem areas within the watershed. Identified problems should be ranked according to priority.

Note: (1) identified problems can be causes and features of degradation as well as inappropriate land use techniques and (2) checklist classification might help with ranking.

Results of the environment assessment should be:

b) a map and/or several thematic maps, showing the watershed’s environmental condition and problem areas.

[edit] Example: Environment Assessment for the Gobecho and the Hagara Sodicha Catchment (Ethiopia)

A detailed depiction of the application of Environment Assessment in MHP catchments in Ethiopia can be found here: 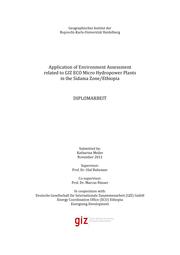 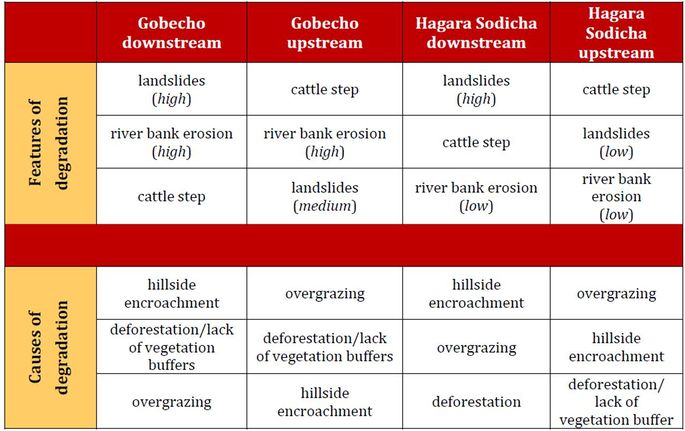 Examples of hand-drawn maps of the Gobecho catchment:

Examples of GIS-based maps of the Gobecho catchment: