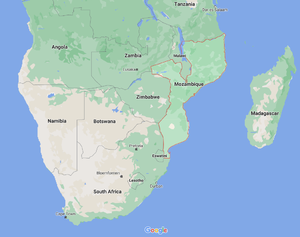 The Republic of Mozambique is located on the south-eastern coast of Africa and has a surface area of 801,590 square kilometres. It is bordered by South Africa, Swaziland, Zimbabwe, Zambia, Malawi, Tanzania, and separated by the Indian Ocean from Madagascar. The country is divided into ten provinces, and a provincial capital city (see Map: Provinces in Mozambique). It is one of the poorest countries in the world, and the 7th poorest in Africa[1] with a GDP per capita of USD 1281 (2019), a total GDP of USD 14.96 billion (2019), and an annual GDP growth of 3.11% (2018)[2]. 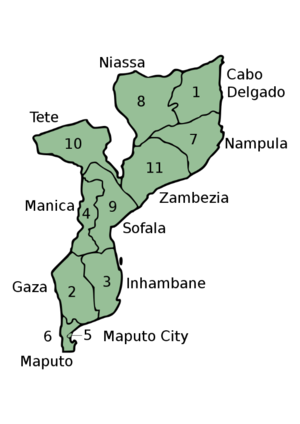 Mozambique has a population of 30.37 million (2019), of which 51.4% are women (2019)[5]. The population is also young with 45% of the population between 0-14 years (2020)[6]. 62.4% of the total population live in rural areas and about one third of the total population is in coastal cities and towns in 2021[6].  The city of Maputo, is the most urbanised Mozambican city and is located in the southern most region of the country. Other large cities with over 300000 inhabitants are Matola, an industrial city located in the suburban area of Maputo Province; Nampula, a university and business city in the North; and Beira which is the capital city of the Sofala Province[7]. Mozambique’s Human Development Index (HDI), which measures a person’s expectancy of living a long and healthy life, access to knowledge, and a decent standard of living, ranks 181 out of 189 countries, with a value of 0.456 (1 being the highest) in 2020[8]. This value is based on health, education, and standard of living indicators, measured by Gross National Income (GNI) per capita[9][10]. A total of 72.5% of the population are considered multi-dimensionally poor[9], from which 49% are in severe multidimensional poverty, and about 62.9% of the population live below the international poverty line of USD 1.90 per day. The estimations for multidimensional poverty are [7]based on data from 2011 due to a lack of most recent publicly available survey data[11].

Mozambique’s coastline is 25000 km long. More than half of Mozambican territory consists of low grassland plateau with an average of 230 m above sea level. There are significant high elevations scattered throughout the country. The highest points in Mozambique are Mt. Binga (2436 m) in the Manica Province, Mt. Namuli (2419 m) in Zambezia, Mt. Domue (2095 m) in Tete, and Gorongosa (1862 m) in Sofala[3]. In general, the east of Mozambique has extensive lowlands while the west is more mountainous[14].

There are several important rivers in Mozambique that provide different regions with fresh water for agriculture and are a valuable source for hydro power plants. The Zambezi River is the longest of Mozambique’s 25 rivers, and fourth longest in Africa. It flows from Zambia to Angola and touches the borders of Namibia, Botswana and Zimbabwe before crossing through the middle of Mozambique and emptying into the Indian Ocean[3]. The Zambezi feeds the Cahora Bassa hydro power plant in the Tete Province.

Other large rivers, such as the 1087-mile Limpopo, which flows from South Africa, and the Ruvuma, which Mozambique shares with Tanzania, have slow flow rates. These rivers are not suited for hydropower, and are mainly used for irrigation.

Since its independence from Portugal in 1975, Mozambique has struggled with state identity. In that year, the constitution of the People’s Republic of Mozambique became effective and two years later, it went through revision making FRELIMO (Frente de Libertação de Moçambique, or Front for the Liberation of Mozambique in English) the only legal political party. FRELIMO started as a campaign against Portuguese colonisers in the 1960s, which lasted until Mozambique gained independence. FRELIMO’s violent victory and their links with the Soviet Union led to a civil war against the Mozambican National Resistance, RENAMO. After the establishment of a new constitution in 1990, the conflict ended with a Peace Accords between both movements in 1992[3]. The new constitution, further revised in 2004, introduced a democratic rule of law and lead Mozambique to hold their first multiparty elections in 1994. The constitution includes the newly established roles of the president as the head of the executive power, the Assembly of the Republic representing the legislative power, and the Supreme Court as the highest body in the judicial power. The representatives for each power are elected every 5 years[15].

Despite the presence of RENAMO and a new political party, The Movimento Democrático de Moçambique (MDM), FRELIMO’s candidates have won every election since 1994 for presidential elections. The most recent general elections were held in 2019 with Filipe Jacinto Nyusi from FRELIMO as the re-elected winning candidate against Ossufo Momade, leader of RENAMO[8]

One of FRELIMO’s visions is to unify all ethnic groups. This posture has caused disputes between small local political groups due to FRELIMO being the dominant party and their constitutional prohibition of the creation of ethno-regional parties[8].

Apart from the path to political stability, Mozambique has faced intensive religious struggles that have resulted in bloodshed. The province of Cabo Delgado in northern Mozambique, has been a subject of interest and armed conflict in the last five years. In November 2017, a violent armed rebellion started in Cabo Delgado, as the jihadist militants from the extremist Islamic movement of Ansar al-Sunna attacked several police posts in Mocímboa da Praia, burning down villages and forcing inhabitants to flee. It is believed that the elevated rate of unemployment and the extremist religious boycott to public health and education, lead young adults from marginalised settlements to join the movement[8].

Mozambique’s main economic activity is agriculture, employing about 70% of the total active population and representing 26% of GDP (2019)[16]. There is a large variety of crops and agricultural products grown in Mozambique, which according to FAO, is the world’s 18th largest producer of cassava (2019)[13]. The most cultivated products include oilseeds, corn, beans, rice and sugar. 9% of the total active population work in the industrial sector[16]. Important mineral exports include aluminium, coal, iron ore, gold, bauxite, graphite, marble and tantalite[13].

Mozambique’s employment rate per sector in 2019[16]

Besides the above-mentioned export goods, electricity is one of Mozambique’s most valuable exports. Cahora Bassa is one of the world’s largest dams. 65% of the electricity generated by Hidroelectrica de Cahora Bassa (HCB) is exported to South Africa. The remaining 35% is split between powering the northern regions of Mozambique and exporting to Zimbabwe[18].

An important natural resource found in Mozambique is liquefied natural gas (LNG). Foreign energy companies such as Anadarko and ENI, discovered significant natural gas deposits in the Rovuma Basin, at the coast of Cabo Delgado, in 2015[19]. Considering the large size of the gas reserves, Mozambique has the potential to be one of the largest LNG markets in the sub-Saharan region[13]. There are already three large LNG projects with investments on Mozambique’s LNG industry[20]. However, due to the internal conflicts in Cabo Delgado, Total (one of the investors) have frozen their investment indefinitely in April 2021[21].

Mozambique has a sub-tropical climate accompanied by high temperatures in the inner territory and even higher in the coastal regions. There are two seasonal variations with cool and dry climate from April to September and hot and humid climate from October to March. In terms of rainfall, the northern region receives on average 1,000 mm/year while the Southern region receives 500 mm/year. The coastlines and some higher topography receive the highest rainfall between 800-1200 mm/year and some semi-arid region in south receive less than 300 mm/year (see Map 3)[14].  On average, there are 2750 hours of sunlight per year and 7:33 hours of sunlight per day[24], an average irradiation profile of around 2000 KWh/m2/year, and a solar harnessing potential of about 2.7 GW[25]. 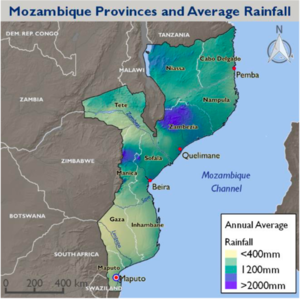 The geographical location of Mozambique with its long coastline and an extensive lowland below sea level makes it highly vulnerable to climate change. In addition, Mozambique shares 13 major rivers with neighbouring countries making it vulnerable to geo-political threats arising from climate change. Reduction in rainfall pattern due to climate change could translate into reduced river flow reduction, leading to potential water resource conflict among neighbouring countries[26].

The geographical location of Mozambique with its long coastline and an extensive lowland below sea level makes it highly vulnerable to climate change. In addition, Mozambique shares 13 major rivers with neighbouring countries making it vulnerable to geo-political threats arising from climate change. Reduction in rainfall pattern due to climate change could translate into reduced river flow reduction, leading to potential water resource conflict among neighbouring countries

Mozambique is also prone to natural disasters such as flood, cyclone, and intense storms. Floods resulting from severe storms and cyclones, have caused destruction of crops and infrastructure in various occasions[27]. The reliance on farming, fishing and agricultural activities of more than half of the population translates into an increased risk on the local economy in the event of a natural disaster[28]. In 2019, Mozambique faced two of its most destructive natural disasters. Cyclone Idai and Cyclone Kenneth devastated large areas of Mozambique, Malawi, Tanzania and Zimbabwe that are still in recovery[29]. The in-land central part of Mozambique also suffers from droughts due to unpredictable rainfall patterns that affect agricultural productivity and access to fresh water[30].

Retrieved from "https://energypedia.info/index.php?title=Mozambique-_Country_Information&oldid=371164"
Categories:
Cookies help us deliver our services. By using our services, you agree to our use of cookies.