From energypedia
chevron_left Back to the Mozambique Off-grid Knowledge Hub

Mozambique has undertaken significant efforts in recent years to electrify the country. The electrification rate has increased from 5% in 2001 to 24% in 2017, and to 29% in 2019. Access to electricity, however, remains low and is mainly focused on urban areas. In 2019, 72% of the urban population had access to electricity compared to 5% of the rural population[1]. This imbalance represents an important challenge to achieving country-wide electrification by 2030, considering that the vast majority (63% in 2019) of Mozambique’s population lives in rural areas[2].

In 1977, two years after Mozambique’s independence, State-Owned utility, Electricidade de Moçambique (EDM), was founded. The purpose of EDM was to act as a unification body for the existing generation centres to promote industrial and agricultural development, as well as improve the extension and quality of household electrification. During the first years of operation, EDM functioned with a corporate management based on profit and later changed to a centralised price setting. However, it was not until the economic re-structuring of Mozambique in 1995, when EDM turned into a public company officially known as “EDM-E.P”[3].

The newly reformed EDM is now the responsible entity for generation, transmission and distribution of electricity as well as the regulator of electricity from renewable energy sources, as stated in the Electricity Law (Law No.21/91)[3].

Due to the vital role renewable energy plays in Mozambique’s electrification goal, the Electricity Law has been in constant review since 2017 to ensure technological development and clear tariff mechanisms as well as business models. With a clearer understanding of the legal framework and the roles of participating stakeholders, the most recent review of 2017 is expected to improve the private sector involvement in Mozambique’s energy sector[4].

There are six working hydropower stations across the country[2]. The largest hydroelectric plant is located in the Tete province and is operated by Hidroeléctrica de Cahora Bassa (HCB). HCB is responsible for most of the hydroelectric generation, with a capacity of 2,075 MW. In 2014, it supplied up to 88% of the power consumed in Mozambique[6]. Due to the low electricity demand (peak demand in 2014 was estimated at only 831 MW) resulting from scarce energy access in Mozambique, the majority of the generation from HCB is exported to South Africa. Smaller shares are exported to Zimbabwe and Botswana[2]. The rest of the hydropower plants are operated by EDM, as shown in the following table.

In addition, there is an on-grid PV solar plant with an installed capacity of about 41 MW (2020). By 2030, solar plants are expected to provide 266 MW of installed capacity as projected in the Power Sector Master Plan[5] . The latest installed PV-projects have been funded by several international energy programmes and foreign governments, such as the Government of South Korea and the Portuguese Carbon Fund[9] .

Table: Electricity generation from RE sources 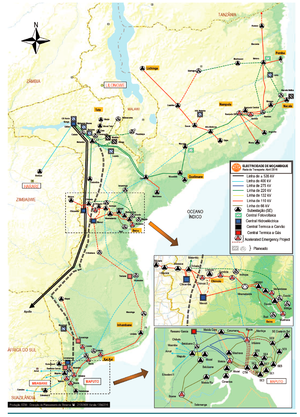 The map below shows the state of the transmission grid across the country in 2016. The provinces of Tete, Sofala and Maputo have the best grid connectivity. In 2016 there were already four substations planned for Beira, three for Maputo, and more spread throughout Mozambique. The southern grid network is not currently connected to the north and central networks; instead, the inter-connector with South Africa is used to power the city of Maputo. Thus, majority of the electricity generated in the North is exported to South Africa and then re-imported[4].

The Mozambican Government is also planning a major transmission project called, Mozambican Integrated Transmission Backbone System (STE). This project will interconnect the isolated power systems and link Tete and Maputo province with extra high voltage transmission lines. Phase 1 of the project will include a 400 KV line connecting Vilanculos with Maputo and three new sub-stations in Vilanculos, Chibuto and Matalane[11] and is expected to commence in late 2021[12].

The table below shows the most recent energy indicators reported by the IEA. In 2018, the total primary energy supply was 10.43 Mtoe, from a total of 20.23 Mtoe produced that year. Final electricity consumption was only 13.63 TWh, however, this number has increased drastically by more than 2000% since 1990[13].

Overall, the sector that consumes the most power is industry. In 2018, the total electricity consumption for industrial activities was 888 ktoe, or 10.32 TWh; the residential sector consumed 1500.3 GWh, commercial and public services consumed 407 GWh and agricultural activities 23.3 GWh. Electricity supplied from the grid, however, is mostly directed to residential users. Based on 2019 billing data from EDM, the on-grid electricity demand in Mozambique is the highest for domestic use (45%) followed by industries (37.3%) and commercial use (16%) [13].

EDM offers different tariff options. The following table shows the current prices (in MZN/kWh) for low voltage use for households and smallholder farmers. These tariffs are uniform across the country [14].

One of the billing methods offered to EDM customers is through conventional electric meters. These meters are lent to the users and read monthly by trained EDM employees to calculate the user’s monthly electricity consumption. Customers may pay their electricity bill directly by bank deposits either by filling up an invoice inside the bank, by money transfer at the bank’s ATM, or as an automatic debit from their payroll accounts[15] .

Another alternative is the use of a pre-paid system called CREDELEC. This system allows users to have control over how much they want to spend in a specific time period by not being forced to pay a monthly fee. This avoids the risk of sudden disconnection due to lack of payment. Purchase options for pre-paid CREDELEC include scratch cards that are available in convenience stores, supermarkets, or by paying directly at EDM ATMs. In 2020, about 78% of electric energy consumers (more than 671,322 clients) got billed through the CREDELEC system[15]. 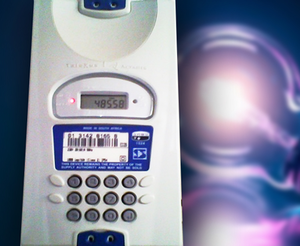 The following table shows the current tariffs (in MZN/kWh) for major consumers for commercial and agricultural activities.

Over the past decade, EDM has been working on restructuring finances to reach a cost-reflective tariff system. In an attempt to lessen the debt and insolvency the company faces, there has been significant tariff increases, which have made it unaffordable for many electricity users to pay their bills. This reality has forced EDM to subsidise tariffs for poor households who are unable to pay, in order to keep them as customers, but at the same time sacrificing the company’s sustainability by keeping operation at a loss. It is estimated that EDM provides subsidies in the form of discounts of about 84% of the monthly electricity bill to most of their retail customers[2] .

As a measure to drive private investments in the energy sector, Independent Power Producers (IPP) were introduced in 2015. However, without a strong financial framework and clear business models, IPPs are expected to face the same fate as EDM and will be compelled to look for other forms of international funding[2].

The electricity service suffers from a circular problem. While electricity demand in Mozambique appears low, it is at an increase especially considering the projected growth in population. The IEA projects a primary energy demand of over 20 Mtoe by 2030 according to current stated policies, and a total population of 43 million by 2030 and 55 million by 2040. These factors result in electricity demand exceeding the share of electricity generated that is not for export, affecting business with South Africa and other countries[16]. Additionally, losses of 27% of the generated power, due to limited available technical staff and delays in the maintenance of the grid aggravate the already insufficient power supply[5].  As a measure to improve the conditions of the grid, EDM has programmed a series of scheduled outrages in 2018 for maintenance of the power system[17].

Mozambique is one of the poorest countries in the world and many Mozambicans although living to the national grid do not have access to it due to the high connection fee. EnDev Mozambique has been supporting EDM with its grid densification programme and this effort made it possible for the Government of Mozambique to waive the connection fees in Dec 2020[20]. Nevertheless, extending the national grid to the rural remote communities is not a viable business solution as it requires large investment and the rural communities are not able to pay a tariff that can cover up this investment cost[21].

Mozambique’s Fundo de Energia (FUNAE), is the public institution responsible for off-grid rural electrification with a special focus on renewable energy. Since its foundation in 1997 with monetary support from EDM, FUNAE has provided access to electricity to 580 schools and 561 health centres in 260 villages who previously relied on either kerosene or candles for lighting[18]. In 2019, 5% of the total rural population had access to electricity[1]. However, since more than half of Mozambique’s population lives in rural communities, this increase is still low, posing a challenge to achieve the goal of electrifying all Mozambican households by 2030.

A major obstacle to the expansion of rural electrification is the lack of sustainability in FUNAE’s income. The cost of electrification programmes is not covered by EDM’s tariffs, due to electricity users not being able to afford them, even though the tariffs are highly subsidised and potential clients live within the reach of the grid. Since EDM does not receive any subsidies from the government to fund to sustain FUNAE’s electrification projects, FUNAE has to rely on external investments and donations to keep operating[18].

For detail information about the energy access situation (both on and off grid), rural electrification plan, access to energy for cooking please refer to the chapter on Energy Access in Mozambique.

For a detail insights into the market scoping and potential of off-grid technologies in Mozambique, please refer to the folowing technology portals:

Retrieved from "https://energypedia.info/index.php?title=Mozambique_Electricity_Situation&oldid=373333"
Categories:
Cookies help us deliver our services. By using our services, you agree to our use of cookies.