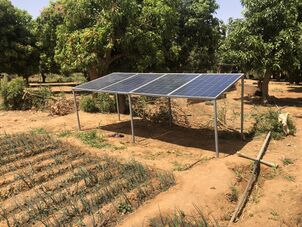 This business model case looks into the financial viability of solar powered irrigation in Mozambique. All the data and prices used in this scenario are based on the market information obtained in January 2022 and was collected by contacting leading solar and diesel pumps provider in Mozambique. The information was collected via email and telephone inquiries.

For the business scenario, a smallholder farmer in Zambezia province in Mozambique is considered and he/she owns 1,2 hectors of land. The farmer wants to install a solar powered irrigation systems (SPIS) and is practicing two crop systems. This scenario also explores different funding models (grant, PAYGO..) for financing the SPIS system. 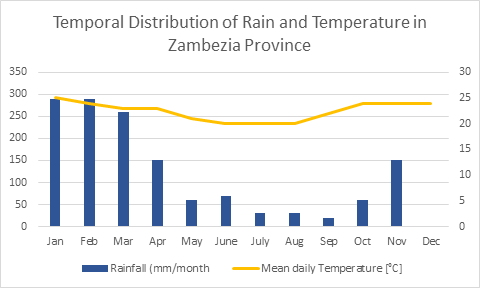 For this analysis, the farmer adopts a two-farming season with solo cropping i.e., only one crop is planted in the entire area of a farm at one time. The selected crops are Maize and Tomato. Maize is the staple crop in Mozambique and tomato is one of the high value crops. The main cropping season starts from Oct / Nov and the second cropping season starts in May. The farmer uses surface irrigation for maize as it is the most common form of irrigation in Mozambique and has an efficiency of 65%. For tomatoes, he/she will use drip irrigation with an efficiency of 90%.

Using the SPIS Toolbox – Water Requirement Tool, the maximum daily irrigation water requirement of the crops is calculated to be 64 m3 /day in the hottest month, based on the average rainfall and mean daily temperature of Zambezia Province.

Table with the average rainfall and the mean daily temperature

The SPIS system is based on the technical and financial assumption shown in the table below. The selected system is also already available in the Mozambican market and can meet the desired flow rate.

*Replacement cost for spare parts such as charge controller, inverter and pumps was not considered in the financial calculation. For simplicity, the scenario looks at 25 years of life time for all components of the SPIS system.

The selected diesel pump has the following specification and is already available in the Mozambican market.

Based on the irrigation demand, the diesel pump will run for approximately 227 hrs/year to meet all our water demands (as shown in the table below).

Working time for diesel pump in a year

Modelling the Financial Viability of the Solar Pumps

As shown in the table as well as graph below, after 5 years, the solar pumps will be cheaper than diesel pump. 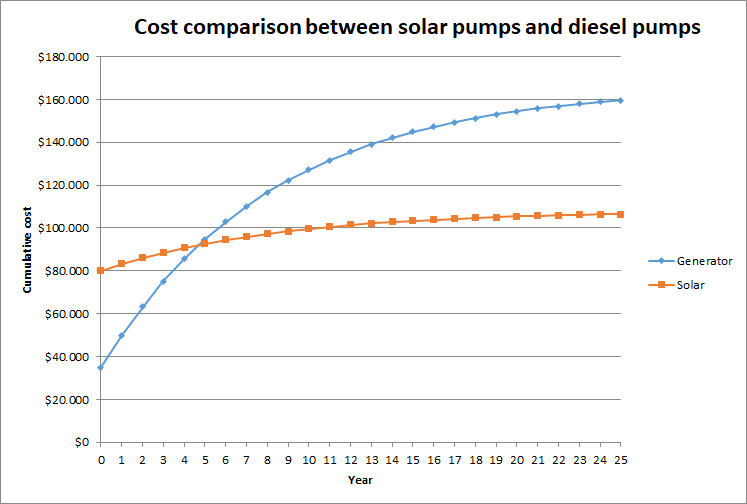 Financing Schemes for the End Consumers

Model 1: 100% self financing under PAYGO 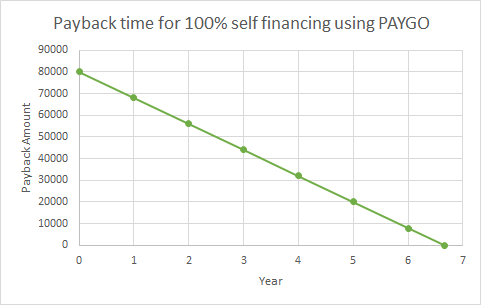 Under this model, the farmer will repay the cost of the entire system in 6.66 years. The farmer do not receive any grant or subsidy and will pay the monthly installment regularly for the indicated time frame. 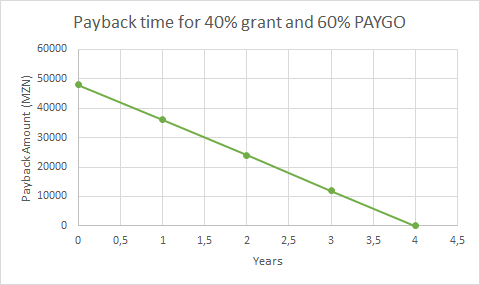 This analysis does not compare with the grid electricity as the grid is available mostly in urban settings and the areas where irrigation is needed, the farmers rely mostly on off-grid solutions. The electricity is also provided at a flat rate irrespective of the usage especially in case of social usage like irrigation.

Solar irrigation has a great potential in Mozambique, considering the demand for irrigation. However, the high upfront cost and lack of after-sales services do pose a challenge for the wider adoption of the solar pumps. There are cheaper models of pumps (mostly Chinese) available in the market but for our analysis we used the more reputed brands.

In terms of PAYGO, the challenge lies in finding a balance between the amount the farmer is ready to pay and a time frame that the company is willing to take risks on. There are other solutions such as asset financing where the payment is distributed to harvest time and the farmer ultimately owns the system.

Retrieved from "https://energypedia.info/index.php?title=Business_Viability_Scenario_for_Solar_Powered_Irrigation_in_Mozambique&oldid=373507"
Categories:
Cookies help us deliver our services. By using our services, you agree to our use of cookies.