Between September 2005 and December 2016, EnDevfacilitated access to sustainable energy services for 17.3 million people. EnDev is mainly active in Africa but is also engaged in Asia and Latin America. On average, EnDev does not spend more than EUR 20 per capita, which is very cost effective in comparison to other programmes. The multinational development partnership has successfully launched markets for modern cookstoves, solar lighting systems and mini-hydro plants in its partner countries. It promotes the expansion of the electricity grid as well as isolated solutions in remote regions. In areas with electricity grids, EnDev develops concepts to enable people in the proximity to afford a connection.

Four out of five people on this planet simply turn a switch. The lights come on, a computer powers up, hot water flows from a tap or machines start humming. One out of five, however, does not have a switch to turn, since he or she simply has no access to modern energy with detrimental impact on the livelihood and well-being. There are various reasons why 1 billion people are still without electricity and 3 billion rely on open fires and traditional stoves for cooking. Operating electricity grids in remote areas is not economically viable for many electricity suppliers in developing and emerging countries and markets for offgrid technologies are not yet developed. Initiatives for promoting modern cookstoves, in turn, face numerous social, cultural and economic challenges.

Energising Development – EnDev – supports access to energy services for all. EnDev focuses on practical solutions for the poor in underdeveloped regions. Access to energy for this particular target group is an essential element for improving their livelihoods and to reduce inequalities. EnDev’s work is rooted in concrete implementation in the field: the bottom-up development of sustainable markets and sectors for pro-poor energy access, and bringing them to scale. EnDev achieves results in terms of sustainable energy access for households, SMEs and social institutions like rural schools and health centres, and in terms of positive impacts on poverty alleviation, gender equality, health, climate, employment, and inclusive economic development.

A pro-poor market approach has the advantage that it supports the self-interest of the suppliers and customers at the same time. Manufacturers and retailers are inspired to develop and sell products and services that meet the basic needs of low-income households and are affordable. Smart subsidies may support penetration into remote areas and to reach more people. Once the markets are up and running, EnDev slowly withdraws and uses its experiences to initiate markets in more countries.

EnDevhas facilitated sustainable access to energy to 17.3 million people since 2005. This number is equal to the entire population of the Netherlands. It was not a straight forward path. What worked in one country didn't work in another. Trying, failing, readjusting, and succeeding: As a learning programme, EnDev has fine-tuned its methods over the years and has gathered knowledge shared globally with other actors in this field of development.

The Sustainable Development Goal 7 to achieve universal access to affordable, reliable, sustainable and modern energy for all while mitigating greenhouse gas emissions at the same time represents a great challenge EnDevand its partners are committed to. Policies, technology, finance and strategies exist – and yet the mission is still far from being accomplished.[1]

Access to energy is a tool to improve livelihoods. The dissemination of modern energy devices can improve living conditions for people. Energy access figures are relatively easy to gather. It is much harder, however, to quantify and qualify impacts on productivity, poverty, health, gender, education as well as on environment & climate. EnDevhas therefore commissioned a large number of studies. These studies underpin the positive impact of the EnDevprogramme. 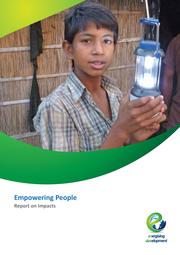 Retrieved from "https://energypedia.info/index.php?title=EnDev_Report_on_Impacts&oldid=214220"
Categories:
Cookies help us deliver our services. By using our services, you agree to our use of cookies.