According to the International Energy Agency (IEA) New Policies Scenario, global energy needs will rise at a slower pace than in the past yet still increase by 30% between 2017 and 2040. This is the equivalent of adding another China and India to today’s global demand. These predictions are supported by a global economy growing at a predicted average rate of 3.4% per year, a world population expanding from 7.4 billion today to more than 9 billion in 2040, and by a process of urbanisation that adds the equivalent of a city the size of Shanghai to the world’s urban population every four months.

The largest contribution to demand growth – almost 30% – comes from India, whose share of global energy use rises to 11% by 2040 (still well below its 18% share in the anticipated global population). Another big player is Southeast Asia, where demand is predicted to grow at twice the pace of China. Overall, developing countries in Asia account for two-thirds of global energy growth, with the rest coming mainly from the Middle East, Africa and Latin America.[1] 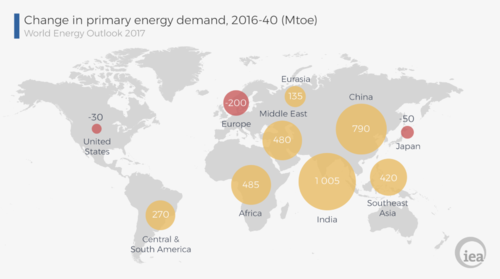 Global investment in electricity overtook that of oil and gas for the first time in 2016. Electricity is the most flexible and clean form of energy and the only one that can be used in the rapidly growing fields of computing, communication, robotization and artificial intelligence. The rising share of electricity in total energy use may also be an effect of the global reaction to increasing climate change concerns and the associated need to decarbonize. 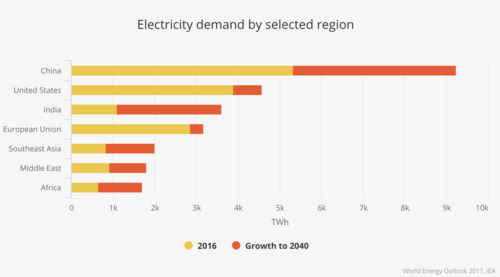 Industrial electric motor systems in conjunction with mobility and heating are expected to progressively and rapidly electrify over the coming years. This will increase power demand considerably along with growth in its traditional domains, according to the IEA New Policies Scenario. Furthermore, rising incomes mean that many millions of households will climb the energy ladder and will use more electrical appliances and thus continue to increase demand.

There are many impressive and useful publications that present the predictions for global and national electricity demand. Estimating electricity demand is essential to the successful delivery of timely new generation. National energy planning, however, tends to focus on providing increased generation with the aim to meet the increased demand of factories and mines or generation that is destined for export, where profit is guaranteed, while giving little consideration to the electricity demand of rural populations without access. Estimating demand in megawatts is of little help when it comes to estimating the demand of the rural un-electrified and counting household connections conceals their often inadequate quality.

Where there are distinct national targets for reaching the un-electrified, too often this has been done with a binary “all or nothing” approach and therefore continued to prioritize large infrastructure projects, picking the lower hanging fruit, reaching the urban and semi-urban populations first as they were the easiest to reach. Electrification of the poor by grid extension, even urban and semi-urban, has often proven to be a highly unprofitable business for utilities, resulting in their hesitation in pursuing it.

Today, a majority of those without access are located in rural areas that are difficult and very expensive to reach with grid-extension. Traditional systems are either too large and not economically viable or too small and will have to be upgraded or replaced soon. An economically viable strategy should be based on some form of decentralised electrification, which can be profitable if purposely built to meet the real demand of the people.

As highlighted in the “Poor Peoples Energy Outlook Report 2016”, putting people at the centre of energy planning is fundamental. Assessing the energy demand of the energy poor includes the present and future demand of energy-poor households for lighting, cooking, water heating, space heating, use of other electrical appliances and other energy services, which must be met with the acceptable minimum level of basic energy services.

This is what the UN Sustainable Energy for All (SEforAll) aims to do by measuring existing and required levels of energy access. Its initiative, denominated Multi-Tier Framework (MTF), was initially developed to monitor progress. The same multi-dimensional approach is also relevant in the planning and investment stages of providing energy access. This Total Energy Access (TEA) approach encompasses:

The MTF is a useful instrument to identify optimal energy access technologies that can meet the needs of the people it will serve within their budgets. Furthermore, it is an instrument that is sustainable over time as it incorporates a possible, often gradual, increase in demand once a first tier level has been achieved.

An innovative web-based application was launched in 2017 by the World Bank, Energy Sector Management Assistance Program (ESMAP) and KTH Royal Institute of Technology in Stockholm. This Electrification Pathways tool considers a variety of open, geospatial data to determine the least-cost options for bringing electricity to areas as small as 1 square km in size and was initially launched with data on three countries –  Tanzania, Zambia, and Nigeria – with more to follow. The tool was developed as a public good available to governments, development organisations, the private sector and any other stakeholder working in the field of achieving universal access to energy. Furthermore, the application incorporates ESMAP’s MTF and hence the growing demand over time is accounted for.

While innovative tools are more than welcome, it is important to engage with the local communities in the planning stage to assure the planned demand really meets the needs of the rural people.

“Putting energy-poor people at the heart of rural energy planning fundamentally changes the outlook of national energy plans in terms of technologies (smaller), timelines (faster), and economics (different financial support, more rural economic opportunity, more energy-sector jobs)”[2]. Despite observing a continued reduction in the cost of decentralized electrification, building a market that can deliver such services effectively and with a profit is not easy. This is especially true with regard to the lower tiers, where it is difficult to build a business model that is profitable. This is where the “viability gap” comes into play. Without help in the form of subsidies or otherwise to cover the financing gap, at least initially, electrification of the rural poor with very low levels of demand will not happen.


There is now increased awareness that national government and donor countries emphasis on electrification by grid extension has been somewhat misguided, especially in the rural poor regions of the world. Such one-sided focus on electrification from the supply side has failed to take into consideration the demands of the people it was going to serve. Policy makers must take a more holistic view of electrification, include productive and community uses of energy as well as household connections to build viable business models and engage with the communities that will be electrified in order to find the best possible technology and financing solutions to meet their specific needs.

Without doing this, we run the risk of designing policies and regulation as well as infrastructure projects that are neither affordable nor appropriate. “Only by planning and measuring progress more holistically will we ever ensure national energy work and international development spending delivers not only power, but also empowerment.”[2]


Greater capacity building and support must be given to policy makers and other stakeholders involved in the planning, so that such a holistic perspective can be incorporated at the early stages of the planning process and help deliver universal access to energy by 2030.

Some initiatives do take a first step in this direction like

Retrieved from "https://energypedia.info/index.php?title=Estimating_energy_demand_of_the_energy_poor&oldid=255689"
Categories:
Cookies help us deliver our services. By using our services, you agree to our use of cookies.