When looking at future scenarios of energy access there is one chief source of reliable data: the International Energy Agency, with its special report on Energy Access Outlook published in 2017, a supplement to the Annual Energy Outlook publication.[1]

Here we find reference to two scenarios for energy access by 2030. First, “The New Policies Scenario”, which aims to provide a quantitative assessment of where existing policies, as well as announced policy intentions, will lead the energy sector. Second, “The Energy for All Case”, which highlights what more needs to be done to put the world on course to achieve the Sustainable Development Goal 7.1 of providing universal access to affordable, reliable and modern energy services by 2030.


Please find a brief overview of the two EIA scenarios below.

According to the IEA, efforts to promote electricity access are having a positive impact in all regions and the pace of progress has accelerated. Their analysis shows that the number of people without access to electricity fell to 1.1 billion people for the first time in 2016, with nearly 1.2 billion people having gained access since 2000.

There is also a positive trend in sub-Saharan Africa, where electrification efforts have been outpacing population growth since 2014. Progress is uneven, however, and there are still more people without electricity today (588 million) than there were in 2000 (518 million).

In Latin America, 97% of the population now has access to electricity. Most of the population (17 million people) who lack access live in rural areas, often in isolated communities far from the grid and in difficult terrain. 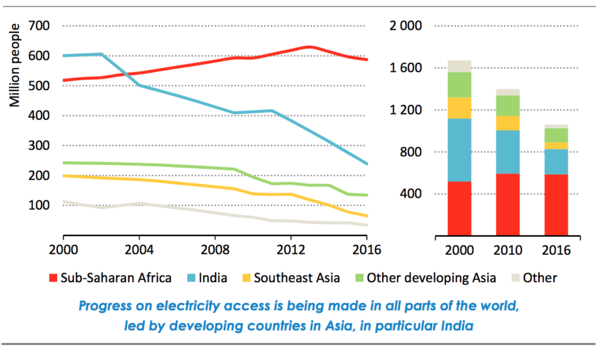 Although there has been no one-size-fits-all strategy for increasing access to electricity in recent years, which reflects the broad diversity of energy resources, infrastructure, technologies, institutions and geography across countries, some noteworthy trends have emerged.

Looking forward, decentralised electrification is expected to play an increasingly dominant role in rural and dispersed communities because of rapidly declining costs of solar PV, battery technologies and energy efficient appliances. It will be supported by changing government policies, market conditions and new business models, as well.

For the purposes of projection, electricity access in the IEA report is defined as referring to a household having an electricity supply connection, with a minimum level of consumption of 250 kilowatt-hours (kWh) per year for a rural household and 500 kWh for an urban household, which increases over time to reach the national average.

The country-by-country analysis of policies, investment and technologies that underpins the New Policies Scenario shows an overall electrification rate in developing countries that will increase from 82% today to 90% in 2030, with countries such as India and other Asian countries getting very close to closing the gap. The pace of progress is expected to slow somewhat when compared to the last few years, with only 44 million people gaining access each year, rather than the 92 million needed to meet universal access by 2030.

Focus needs to be put on sub-Saharan Africa, as this is where 90% of the 674 million people still without access to electricity in 2030 will live. While the access rate in sub-Saharan Africa is expected to grow from 42% today to 59% in 2030, overall progress will struggle to keep pace with continuing population growth, leaving around the same amount of people without access in 2030 as there are today.

Centralized grid electrification continues to be the primary means of electrification because it is the least-cost option per Kwh for the majority of the people gaining access. However, its relative importance is decreasing since these people will represent only half of the total population gaining access in the years to 2030. In rural areas where centralized grid access is more expensive, two-thirds of the population gaining access is expected to do so with some form of decentralised system as this is the least-cost solution in such areas.

Average investment costs are $24 billion per year to 2030, 1.5% of the annual global energy investment. The total investment for electricity access is roughly one-third each for on-grid access, mini-grids (generation and distribution) and for off-grid. Almost 90% of all investment in generation is for renewables, particularly for solar PV. 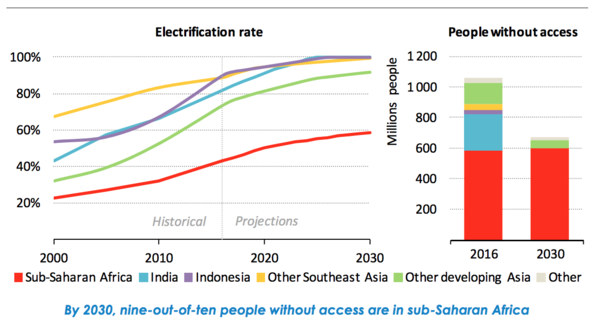 Future projections for electricity: The “ENERGY FOR ALL” Case

In the Energy for All Case, where universal access to electricity is achieved by 2030, the greatest challenge is to provide access to people living in the most remote areas in sub-Saharan Africa. New geospatial analysis shows that decentralised systems are expected to be the least-cost option to supply electricity for nearly three-quarters of those concerned, but that grid expansion also has an important part to play. The analysis also shows that almost 90% of those gaining access over and above the projections in the New Policies Scenario, do so through generation from renewables, with almost 90% provided by off-grid solar PV systems given their modular nature.

The additional annual investment cost is $28 billion per year until 2030, equivalent to 1.7% of total global energy investment with a vast majority going to decentralised power systems. 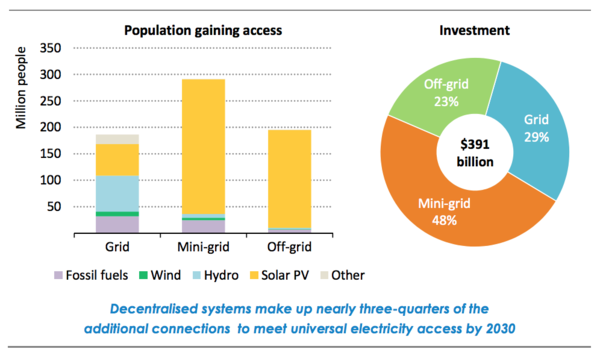 Today around 2.8 billion people – 38% of the global population and almost 50% of the population in developing countries – lack access to clean cooking. Some progress on access to clean cooking has been observed in recent years, mainly in Asia, as a result of targeted policies focusing on the use of LPG in urban areas. Despite these efforts, the number of people without clean cooking access has remained flat since 2000, with population growth outstripping progress in many countries. In sub-Saharan Africa, there were 240 million more people relying on biomass for cooking in 2015 compared to 2000, a trend that is unfortunately expected to continue.

For the purpose of projections, the IEA defines “access to clean cooking” as a household primarily relying on cooking facilities, which are used without harm to the health of those in the household, and which are more environmentally sustainable and energy efficient than biomass cook stoves and the three-stone fires currently used in developing countries. 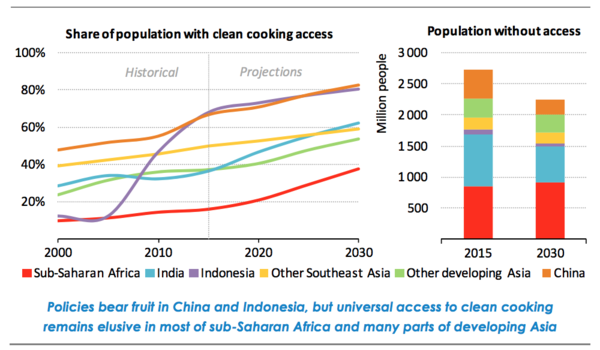 Future projections for clean cooking: The “ENERGY FOR ALL” Case

The Energy for All Case sets out what would be needed to provide universal access to clean cooking for an additional 2.3 billion people by 2030 relative to the New Policies Scenario, with more than 80% of people living in rural areas. For those who gain access in urban areas, LPG, natural gas and electricity are the main solutions. The path to clean cooking access for the more than 1.8 billion people who gain access in rural areas is distributed among improved and advanced cook stoves, LPG and biogas. A cumulative $42 billion investment is needed to ensure universal clean cooking access, relative to the New Policies Scenario. 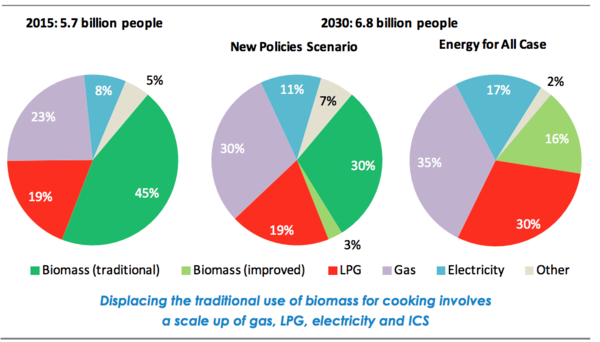 Populations relying on fuels for cooking in developing countries. The Energy for All Case depicts the change in energy sources.[1]

Currently, we are not on the right course to achieve the SDG 7.1 of providing universal access to affordable, reliable and modern energy services by 2030.Trends in electricity access are looking rather positive as the technologies needed to reach the goal are available, while new and innovative business models and funding partnerships are appearing and will hopefully provide the extra funds needed to upscale electricity access. Sub-Saharan Africa stands out as the only area where a substantial access gap will most likely remain in 2030. In the rest of the world, much has been achieved already. However, there is still room for progress from policy makers and regulatory institutions in establishing the best possible framework to ensure the necessary funds are channelled to electrification, especially of the most dispersed and less populated rural areas. The challenges facing universal access to clean cooking are many and the outlook remains unfavourable. The investment cost is low compared to the resulting benefits and to the size of overall investment levels in the energy sector. It is, therefore, fundamental to cultivate local markets and foster cultural change so that access to clean cooking becomes a reality for all by 2030.

Retrieved from "https://energypedia.info/index.php?title=Future_scenarios_of_energy_access&oldid=293902"
Categories:
Cookies help us deliver our services. By using our services, you agree to our use of cookies.