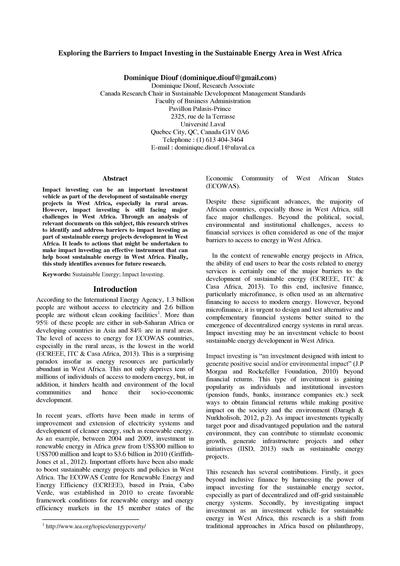 According to the International Energy Agency, 1.3 billion people are without access to electricity and 2.6 billion people are without clean cooking facilities1. More than 95% of these people are either in sub-Saharan Africa or developing countries in Asia and 84% are in rural areas. The level of access to energy for ECOWAS countries, especially in the rural areas, is the lowest in the world (ECREEE, ITC & Casa Africa, 2013). This is a surprising paradox insofar as energy resources are particularly abundant in West Africa. This not only deprives tens of millions of individuals of access to modern energy, but, in addition, it hinders health and environment of the local communities and hence their socio-economic development[1].

In recent years, efforts have been made in terms of improvement and extension of electricity systems and development of cleaner energy, such as renewable energy. As an example, between 2004 and 2009, investment in renewable energy in Africa grew from US$300 million to US$700 million and leapt to $3.6 billion in 2010 (Griffith-Jones et al., 2012). Important efforts have been also made to boost sustainable energy projects and policies in West Africa. The ECOWAS Centre for Renewable Energy and Energy Efficiency (ECREEE), based in Praia, Cabo Verde, was established in 2010 to create favorable framework conditions for renewable energy and energy efficiency markets in the 15 member states of the
Economic Community of West African States (ECOWAS)[1].

Despite these significant advances, the majority of African countries, especially those in West Africa, still face major challenges. Beyond the political, social, environmental and institutional challenges, access to financial services is often considered as one of the major barriers to access to energy in West Africa[1].

Retrieved from "https://energypedia.info/index.php?title=Exploring_the_Barriers_to_Impact_Investing_in_the_Sustainable_Energy_Area_in_West_Africa&oldid=77463"
Categories:
Cookies help us deliver our services. By using our services, you agree to our use of cookies.