The role of independent regulators should be strengthened. In particular, they need to be equipped with an adequate, separate budget, clearly defined powers to make binding decisions, and irrevocable, fixed-term appointments for senior staff. Independently of the specific market design and industry structure, it is essential that costreflective price signals exist and are able to trigger investments. The phase-out of all fossil fuel subsidies is a key tool to achieve this. While cost-reflective price signals are needed to ensure energy efficiency and to relieve state budgets, it must be ensured that electricity does not become unaffordable for vulnerable consumers. This section elaborates on the key actions required today to facilitate the transition to renewables beyond 2020. It treats all indispensable elements of the transition: the investment framework, renewables support, (international) transmission as well as industrial policy and local value creation.

Parabolic trough plant are the most widely commercially deployed Concentrating Solar Power (CSP) plant, but are not a mature technology and improvements in performance and cost reductions are expected. Virtually all PTC systems currently deployed do not have thermal energy storage and only generate electricity during daylight hours. Most CSP projects currently under construction or development are based on parabolic trough technology, as it is the most mature technology and shows the lowest development risk.

Parabolic troughs and solar towers, when combined with thermal energy storage, can meet the requirements of utility-scale, schedulable power plant. Solar tower and linear Fresnel systems are only beginning to be deployed and there is significant potential to reduce their capital costs and improve performance, particularly for solar towers. However, parabolic trough systems, with their longer operational experience of utility-size plants, represent a less flexible, but low-risk option today.


Solar towers using molten-salt as a high temperature heat transfer fluid and storage medium (or other high temperature medium) appear to be the most promising CSP technology for the future. This is based on their low energy storage costs, the high capacity factor achievable, greater efficiency of the steam cycle and their firm output capability. While the levelised cost of electricity (LCOE) of parabolic trough systems does not tend to decline with higher capacity factors, the LCOE of solar towers tends to decrease as the capacity factor increases. This is mainly due to the significantly lower specific cost (up to three times lower) of the molten-salt energy storage in solar tower plants.

CSP technologies offer a great opportunity for local manufacturing, which can stimulate local economic development, including job creation. It is estimated that solar towers can offer more local opportunities than trough systems (Ernst & Young and Fraunhofer, 2010)[2].


Nathaniel Bullard, a solar analyst at Bloomberg New Energy Finance, has calculated that the cost of electricity at the Ivanpah Solar Power Facility, a CSP.


IRENA has published on June 2012 a series of studies titled: "Renewable Energy Cost Analysis". The CSP study shows the cost of both building and operation of CSP plants. Costs are expected to decrease, but there are insufficient installations to clearly establish the learning curve. As of March 2012, there were 1.9 GW of CSP installed, with 1.8 GW of that being parabolic trough[5].

The LCOE of renewable energy technologies varies by technology, country and project based on the renewable energy resource, capital and operating costs, and the efficiency / performance of the technology. The approach used in the analysis presented here is based on a discounted cash flow (DCF) analysis. This method of calculating the cost of renewable energy technologies is based on discounting financial flows (annual, quarterly or monthly) to a common basis, taking into consideration the time value of money. Given the capital intensive nature of most renewable power generation technologies and the fact fuel costs are low, or often zero, the weighted average cost of capital (WACC), often also referred to as the discount rate, used to evaluate the project has a critical impact on the LCOE. There are many potential trade-offs to be considered when developing an LCOE modeling approach. The approach taken by IRENA is relatively simplistic, given the fact that the model needs to be applied to a wide range of technologies in different countries and regions. 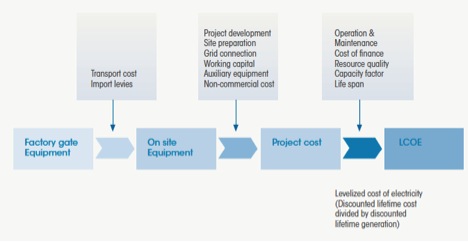 Retrieved from "https://energypedia.info/index.php?title=Financing_Concentrating_Solar_Power&oldid=119501"
Categories:
Cookies help us deliver our services. By using our services, you agree to our use of cookies.