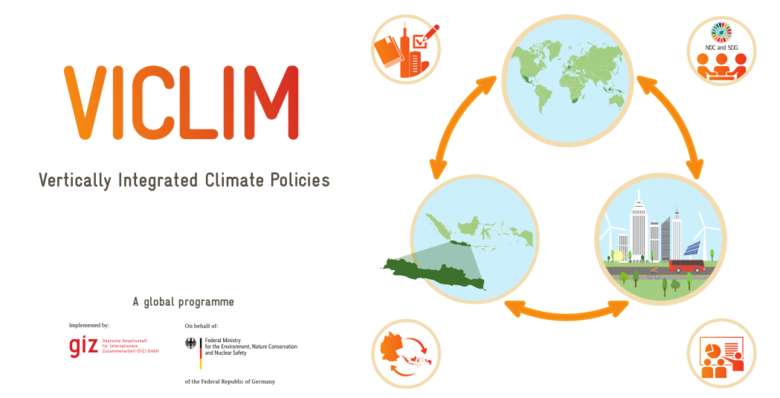 Since 2007, Indonesia has been playing an important role in the efforts of tackling global climate change. Indonesia has not only been active in global climate change negotiations, but also has taken important steps towards effective climate action by developing the necessary policies and regulations on planning, implementation and monitoring. Recently, Indonesia took another step forward as the government started to transform its mitigation action planning approach[1] into an integrated low carbon development (LCD) planning approach and to feed its results into the overall development plans of the country, the National and Regional / Provincial Five-year Medium-Term Development Plans (RPJMN and RPJMD respectively)[2].

In 2007, Indonesia successfully hosted the 13th UNFCCC Conference of Parties at Bali, which resulted in the ‘Bali Action Plan’, an initial effort of long-term cooperative action on climate change. In 2009, on the G 20 meeting at Pittsburg, the Government of Indonesia expressed its commitment on tackling the climate change issue by voluntarily reducing greenhouse gas (GHG) emissions by up to 26  % against the Business as Usual (BAU) scenario through domestic efforts and by up to 41 % with international support by 2020.

In 2011, this quantified commitment was officially regulated by the issuance of the Presidential Regulation (Perpres) No. 61/2011 on a National Action Plan for GHG Emission Reduction (RAN-GRK)[3]. This regulation became the most important legal standing for both national and provincial governments to develop, implement and monitor mitigation action plans. Article 6 (1) obliges the provinces, namely the Governors, to prepare a Regional Action Plan for GHG Emission Reduction (RAD-GRK), which shall be adopted by a Governor's Regulation within the next twelve months (see Article 6 (3)). The Perpres also laid foundation for support to the provinces. Article 8, for example, mentions that guidelines for the preparation of RAD-GRKs are to be developed.


Consequently, the National Ministry of National Development Planning (BAPPENAS) set up a national secretariat on GHG emissions reduction, known as ‘RAN-GRK Secretariat’ or ‘Sekran’, with the task to manage and coordinate the planning, implementation and monitoring of the mitigation action plans. It developed guidelines and provided technical assistance to the 34 provinces in form of national workshops as well as one-to-one support to each province. Participants were the Provincial Working Groups on GHG emission reduction, known as ‘Pokja RAD-GRK’[4], that responsible for the development of the provincial plans. At the end of 2012, after several workshops and meetings, all 34 provinces had developed their RAD-GRKs for the period until 2020 and had formalised them under Provincial Governor Regulations.

Subsequently, in order to adapt to this adjustment of the reduction target, a process of reviewing the RAD-GRKs started in 2017. The RAN-GRK Secretariat facilitated this process through country-wide workshops with all 34 provinces as well as one-to-one support with the aim of reviewing the currently used BAU scenarios, adjusting GHG emissions reduction targets and developing new mitigation actions until 2030.

The first result of the initiative was marked by the publication of the report entitled ‘Low Carbon Development – A Paradigm Shift Towards a Green Economy in Indonesia’ on 26 March 2019[6]. And at the beginning of 2020, Indonesia adopted its new National Medium-Term Development Plan (RPJMN) 2020-2024[7] that incorporates for the first time Low Carbon Development as a national priority and the reduction of GHG emissions as a ‘Macro development goal’[8]. 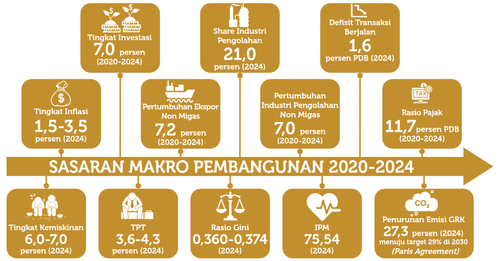 VICLIM’s focus was to strengthen BAPPENAS’s coordination role to the sub-national level through supporting the RAN-GRK Secretariat in this review and transformation process.

Since 2017, VICLIM – together with other international cooperation partners – has supported the RAN-GRK Secretariat to regularly conduct (up to twice a year) ‘National workshops on Low Carbon Development’. The main objectives of these workshops were:

During the workshops, the members of the Pokja RAD-GRK, representatives of national line ministries, external technical experts and the national RAN-GRK Secretariat staff analysed together the current provincial mitigation plans and their progress. They reviewed the activities and checked them against the current overall development plans of the provinces (RPJMD 2015-2019) in order to ensure the mitigation activities’ integration into these plans. They updated the BAU baseline scenarios until 2030, drafted new mitigation actions for the period after 2020 and exchanged about successes and challenges in implementation of measures. Through this, a substantial form of knowledge management within and between the Pokja RAD-GRK could be initiated. Loss of knowledge due to regular staff turn-over could be limited and a better institutional learning within the provincial administrations was made possible.

From end of 2018 the focus of the workshops was to roll-out ‘Low Carbon Development’ (PRK), to disseminate the necessary information about this initiative to the provinces and support the transformation from the RAD-GRKs. Since BAPPENAS had started integrating this new paradigm at national level, it was now time to use this approach at provincial level, too.

Another focus of VICLIM’s work was capacity development for selected (pilot) Pokja RAD-GRK and their members. VICLIM and PAKLIM developed and organised a series of training courses and peer-to-peer exchange events on planning, implementation, evaluation and improvement of mitigation projects. The training courses covered the topics of (1) calculating a greenhouse gas inventory and a multi-sectoral BAU baseline for a region / province, (2) identifying and selecting mitigation measures, (3) developing mitigation scenarios according to selected measures in line with local development priorities and (4) identifying key stakeholders / institutions and financial resources. The training courses and events were all implemented together with the RAN-GRK Secretariat. Sekran staff was trained as trainers in order to ensure (a) the sustainability and continuity within the government structures and (b) the opportunity for a scaling-up to other regions. Trainings were partly held in collaboration with ICLEI - Local Governments for Sustainability and the Association of Indonesian City Governments (Asosiasi Pemerintah Kota Indonesia; APEKSI). Both shared experiences related to the implementation of mitigation actions and environmental conservation from the city level. In addition to the Pokja RAD-GRK members, representatives of selected cities participated, such as Malang City, Probolinggo City and Semarang City.

The positive response of participants shows that the this series of training courses and peer-to-peer exchange events was a very good platform, on which participants obtained assistance from RAN-GRK Secretariat as well as colleagues from other provinces (peers), could discuss about up-to-date activities and challenges, and shared their diverse strategies for mitigation of climate change.

Retrieved from "https://energypedia.info/index.php?title=Indonesia:_From_Mitigation_Action_Plans_To_Integrated_Low_Carbon_Development_Planning&oldid=320025"
Category:
Cookies help us deliver our services. By using our services, you agree to our use of cookies.