Africa has progressed in building its energy infrastructure. However, according to the World Energy Outlook, 22 million people in Sub-Saharan Africa live without access to electricity. Extension of national grids is only viable to a certain extent considering geography and technology. Mini-grids, isolated networks, have become a viable alternative to advancing national grids – thanks to recent technological developments. Thus, mini-grids can contribute significantly to meeting the growing energy needs. Yet, only very few such mini grids have been deployed in Africa so far.


The EU Energy Initiative-Partnership Dialogue Facility (EUEI-PDF) together with the Alliance for Rural Electrification (ARE) and REN 21 published the Mini-grid Policy Toolkit ("Policy and Business Frameworks for Successful Mini-grid Roll-outs”) to provide guidance on how African policy-makers can develop a sustainable mini-grid policy. The goal of the Mini-grid Policy Toolkit is to foster electricity access as well as economic activity based on secure and ideally clean electricity over the long-term. It presents insights into operational models, economics and financing aspects of mini-grids, as well as an overview of relevant stakeholders. The Toolkit also opens up the discussion of mini-grids deployment for rural electrification from a business point of view: it clearly links the different operator models and the respective financial issues and required policies and regulations. It thereby sheds light on the specific requirements for deploying the operator models, and provides hands-on guidance on how to meet them. Furthermore, it provides guidance for the process of designing and implementing mini-grid policy and the regulation framework, sources and links for further reading as well as case studies illustrating practical experiences.


Next to the publication the Mini-grid Policy Toolkit also makes available useful support tools for desiging mini-grids on its website, such as a financing tool.

Energy is a vital component for production processes. customers of energy can be grouped into different categories:

From an Energy/Agriculture Nexus perspective, it is particularly relevant to take a closer look at agricultural and productive loads. According to the FAO ([1]), energy is used in agriculture for the production and scattering of fertilizers and pesticides, for the irrigation of crops, for the processing of food such as drying, packaging, storing, transporting and cooling and for the general running of agricultural machinery and appliances such as pumps, lights and fans. Agriculture is not only essential for the direct feeding and nutrition of the farmers and their surroundings: the agricultural sector often contributes significantly to a country`s GDP, particularly in developing countries.


The extension of national grids into remote areas can thus bring social and economic benefits connected with an increase of agricultural productivity. However, the connection of isolated regions to the main electricity grid is often costly and difficult. Off-grid solutions such as mini-grids proof to be a very useful way to provide those territories with energy, thereby increasing agricultural productivity, development and livign standards. Renewable energy sources can play a significant role in mini-grids as prcies have decreased considerably within the last years - leading ot the fact that in Africa, nowadays renewable energy and hybrid solutions have a lower Levelised Cost of Electricity than diesel generators.

One alternative is to construct mini-grids in areas outside the reach of central grids. EUEI-PDF defines a mini grid as "a power system where the produced electricity is fed into a small distribution network that provides a number of end-users with electricity in their premises. Mini-grids are typically off-grid, less than 1 MW in capacity, and utilize diesel, renewable (+battery) or hybrid (combined) fuel sources to produce power."[2] See also here for more information on mini-grids.


These mini–grids generate electricity on a small scale, usually 10 KW to 10 MW. Another possibility is to build stand-alone systems operating with solar energy on small scale. These tools can be PicoPV Database or Solar Home Systems that usually operate with one or two solar panels feeding electric devices.


Mini-grid technologies have shown a sufficient track record. Operated with renewable energy technologies mini-grids can provide electricity at a lower cost than fossil fuel-based power generation in many cases. The International Energy Agency (IEA) anticipates that more than 50% of the rural population currently without energy access are best supplied with electricity via mini-grids. Important to the successful implementation of these mini-grids are the right policies.


Case studies of significant improvements in electric supply triggered by mini-grids are known from Kenya, Mali, Senegal and Tanzania. 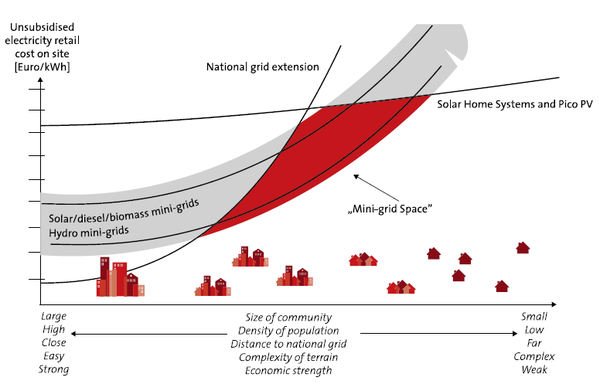 Mini-grids differ in terms of technical asset possession, operation and maintaining of the system and relations to the customers. The successful deployment of the different mini-grid operator models depends on many parameters such as the natural environment, the socio-economic framework as well as the policy and regulatory context.
The correct policy for mini-grids depends upon the operation model of the mini-grid. Choosing an operatior model depends again upon national, social and political circumstances and on the dimensions and structures of the mini–grids. There are mainly four different operator models, i.e. operation by:

Utility Operator Models: a utility is responsible for all mini-grid operations. Funding is usually secured by public funds. Operation of those mini-grids works parallel to the operation of the national grid. The power supply tariffs are usually cross-subsidized by the utility to offer affordable power. The utilities could make use of their potential to install mini-grids on a large scale; however, mostly they view mini-grids as not being their core business.


Private Operator Models: mini-grids are planned, installed and operated by a private entity. The systems are financed by private equity donors, commercial loans, public support or a mix of these. Private entities proved to be able to manage small-scale grids more efficiently; however, they have to manage the task of receiving only little revenues while facing substantial managing costs. The private entities often try to secure deals with large-scale customers to ensure regular cash flows or use economies of scale by managing multiple mini-grids under one management. User tariffs are usually freely negotiated,.


Community based Models: owned and operated by local communities and financed by a high share of grants. Technical tasks are often carried out by third parties due to the lack of expertise of the local communities. Small-scale mini-grids depend upon social structures to work well; bigger grid-systems are usually organized more professionally.


Hybrid Operator Models are defined by the fact that investment, ownership and operation of grid-systems is carried out by multiple actors. Separation of tasks can be executed in form of overall separation between production and distribution of power or by separating between building, owning, operating and maintaining the system. The political framework usually conveys or impedes the becoming of hybrid operated grids.

Major barriers for mini-grid systems are not related to technology: There are no significant technology barriers that hinder mini-grids whether powered by diesel generators, renewable energy or hybrid systems. Rather, financial sustainability is the key challenge since supply to remote villages with low income is not economically viable. Another barrier is the issues that there is no “one-size-fits-all” solution. Further barriers are (Mini-Grid Policy Toolkit, p. 29):

Nevertheless, case studies have shown that these challenges can be overcome, in particular through business driven approaches.

For more case studies please have a look at the website of the Mini-Grid Policy Toolkit. Also the World Bank has published several Mini-Grid Renewable Energy Systems Case Studies showcasing the best practices and lessons learned.
►Go to Top

The Mini-grid Policy Toolkit provides advice on how to develop accurate predictions of electricity demand - which is particularly difficult in rural areas where there is little experience with personal access to electricity. Further, the Toolkit provides details on cost structures and revenues and tariffs. Online, the Toolkit offers a financing tool to support the calculation of cash-flows.


The costs of mini-grids can be separated into fixed and variable costs. Fixed costs are costs for generation and distribution hardware as well as investments in project development, project implementation and project financing (incl. interest), variable costs are those needed to finance operation, management and maintenance.


Revenues originate from connection fees, electricity sales as well as subsidies or grants. The primer two (ans sometimes also subsidies) depend on:

Assessing the demand accurately and matching this demand with the electricity supply is key to ensure stable revenues. Electricity demand can depend on income patterns of villagers, seasonal influences and crop cycles. Often, the margins of return of mini-grid systems are rather low, making it difficult to even cover the initial investment. Generally speaking, it is particular challenging to collect sufficient revenues in rural areas due to the average lower demand and lower ability to pay.


These factors fuel private investors' perception of mini-grids being high-risk and low-return investments. A reliable forecast of cash flows is often hard to make. However, private capital is crucial against the background of limited public funds. Possible investors are local banks who often know the local market dynamics, mezzanine financiers or - to a much smaller extent - crowdfunding initiatives.

To leverage the potential of mini-grids requires a sound policy and regulatory framework i.e. binding rules, strategies,
institutions and processes. To design mini-grid policies and regulations some strategic decisions have to be taken, e.g.

The institutional ramework needs to address the expectations of different stakeholders concerning revenues as well as customers needs regarding affordability and safety. It should be stable, clear and comprehensive, accessible, cost-effective and efficient, transparent and predictable.


The policy and regulatory framework includes policies, institutions, and regulations, as well as processes.

Mini-grids and Productive Use Costumers

Mini-grids can represent a very effective alternative to fossil fuels for productive use customers, such as:

Frequently, these users already use diesel engines to power their machines and appliances - as it is the case in agricultural value chains. Exchanging these diesel-run machines with electric machines can be economical if the electricity cost is less than the cost of locally available diesel. A case study from Egypt exhibits a cost comparison of diesel and solar powered irrigation pumps


If diesel-run machines are not yet available, adopting electric machines can improve productivity, but promoting their adoption becomes more challenging. When planning electrification with mini-grids, initiating/enhancing productive uses of electricity should be considered to both support economic development of rural areas as well as increase the sustainability and profitability of mini-grid projects. Besides others, productive use consumers need stable electricity tariffs since tariff fluctuation can have severe impacts on their business activity and might even drive them into bankruptcy.

Retrieved from "https://energypedia.info/index.php?title=Mini-grid_Policy_Toolkit&oldid=376891"
Categories:
Cookies help us deliver our services. By using our services, you agree to our use of cookies.