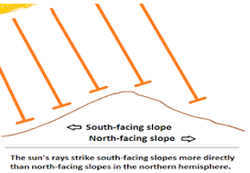 The effect of aspect (Source: http://www.explorenaturalcommunities.org)
Topography describes the elevation and the relief features on the earth’s surface. Relief features include both natural and man-made landforms such as roads, hills, valleys, railways among others. Key topographical features in evaluating market potential for SPIS are slope and aspect.

Slope is a measure of the change of elevation over a certain distance. It answers the question of how steep an area is and is a determining factor for the type of irrigation system to promote. This in turn determines the cost and labour requirement (e.g. erosion control practice and water conveyance channels). For instance, surface irrigation is more suitable in undulating areas and is cheaper compared to sprinkler and drip irrigation which are more suited on steeper or unevenly sloping land. Therefore, coupling steep lands with a factor like low access to finance (discussed in Chapter 3) would lead to weak market potential for SPIS.

Aspect describes the direction which a slope faces. It is especially relevant for systems located in higher latitudes and rarely affects systems close to or along the equator. Aspect influences the amount of solar radiation that the slope receives as well as the daily range of temperature and the relative humidity on the slope.


Topographic analysis for potential SPIS sites can be determined through use of topographic maps that depict the physical configuration of the earth’s surface using contour lines as wells as symbols for man-made and natural features. Users can also use Digital Elevation Models (DEMs) that are specialized databases that represent the relief of a surface between points of known elevation. DEMs can be used on Geographical Information System (GIS) platforms. This should be followed by a ground-truthing exercise to determine the exact slope and aspect of the area of interest.