Access to energy has recently taken a prominent place in the development agenda. It has been placed in a clear position among the Sustainable Development Goals (SDG) of the Agenda 2030. SDG number 7 is “to ensure access to affordable, reliable, sustainable, modern energy for all by 2030”. Electrification is certainly nothing new. It has indeed served as a key benchmark for economic development and social progress since the 1930s.

Yet energy was not on the shorter list of the 8 Millennium Development Goals set in the year 2000. The Sustainable Energy for All (SE4All) forum was set up by the UN in 2011, undoubtedly paving the way to the SDG7 four years later.

The importance of the provision of energy is furthermore underlined in the key role it has in the delivery of many of the other SDGs, including those regarding gender equality, poverty and hunger reduction, provision of clean water, sanitation and climate mitigation. 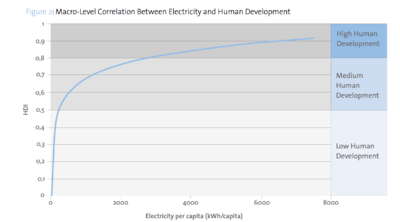 This correlation leaves an open question on causality. Is energy consumption a mere consequence of increasing GDP or is it an essential component in the overall growth of income and welfare, along with other factors such as investment in transport infrastructure, agricultural improvements, increased education, etc.?

It is difficult to go beyond a simple measurement of this correlation at a macro-economic level. Development is an evolution of an economic system and of society as a whole, and an increase in income and wealth is only one aspect of it. Even when taking “a one-dimensional perspective on development with economic parameters”, empirical research “shows a modestly positive impact of electricity on productivity, which seems to vary across countries …..”[2].

What we see clearly is that the jump from a situation of no access to having access, not only opens the way to more comfortable consumption but it also unlocks many ways of increasing and improving personal productive capacity and production at a community level.

Causal relations can be observed at the micro level. They illustrate clear examples of positive impacts of energy access on various aspects of life that belong in the overall concept of economic and social development, even if they are often not included in short-term measures of income.

It is not uncommon that households relying on biomass for cooking dedicate several hours each day collecting firewood, and several hours cooking with inefficient stoves, a burden that largely falls on women and children. It is clear that if this time were allocated differently and access to modern energy allowed women to invest in income generating activities or education, they would be able to improve their overall well-being.

Long-term benefits usually not accounted for

Long-term benefits of electrification are usually not accounted for in studies, as these are usually limited in time frame to around two years at best. However, the medium and long-term impact that electrification has on a community, in terms of increased political awareness and improved educational standards, can take years if not decades to manifest. It is not uncommon, for example, that it is the children of a household that have the greatest advantage from electrification. It is a process whereby time-consuming drudgery is  reduced, allowing children to attend school, study with proper lighting in the evening, become more socially and politically aware and eventually establish themselves with jobs which will allow them to provide their children further improved conditions. This is a cycle that takes decades, but constantly increases socio-economic development and overall well-being.

Bureaucratic red tape and credit constraints are all real obstacles to access. In many developing countries, it takes months to get connected once a commitment has been made. Furthermore, even highly subsidized connections are not affordable for many poor households. If access is obtained, despite these initial challenges, then low grid reliability and lack of appropriate after-sale support become the next challenges. It is indeed very possible that the measured economic development would increase if these challenges were addressed.

Retrieved from "https://energypedia.info/index.php?title=Socio-economic_impact_of_access_to_energy&oldid=271994"
Categories:
Cookies help us deliver our services. By using our services, you agree to our use of cookies.