The Journey of a Bolivian Entrepreneur with Malena Stoves

In April 2008, the ‘EnDev Bolivia - Access to Energy’ project (formerly the Access Component of Energy Services - PROAGRO) carried out  a training workshop in the community of Bolinda, Caranavi (La Paz) in order to teach selected promoters from different local communities how to build Malena improved cook stoves. One of the participants in this workshop was Gregorio Poma, representing the Corpus Cristi community of the municipality of Caranavi (La Paz).

This article outlines the success story of Gregorio Poma.

Until the beginning of 2008, Gregorio Poma was selling Kisa (dried peach) soft drinks from his little stall located at the side of the road entering Caranavi. He prepared the peach drink on a traditional stove and charged only 0.50 Bolivianos per glass (less than 10 cents of a US dollar).

After the workshop, Gregorio started working not only as a promoter but also a constructor of Malena stoves in his community. Subsequently, in early 2009, he decided to make several improvements to his soft drinks business.

With the newly gained knowledge of the advantages of Malena cook stoves, Gregorio decided to build a larger Malena stove to boil the water for the soft drinks and eliminate the smoke problems during preparation. At the same time, he decided to start selling natural fruit drinks instead of Kisa as the sales of the latter had been quite slow.

Due to a growing demand for the natural fruit drinks, Gregorio built more and larger Malena cook stoves, to prepare larger quantities of the drinks.

From 2014 onwards, he moved his operation to a shop within his home.

Presently, he has three large Malena cook stoves in his shop. Every second day he boils nearly 300 litres of water on these stoves to prepare natural fruits drinks from lime, grapefruit and orange.

Every day, he sells approximately 150 litres of natural fruit drinks, served in recycled aluminium glasses or small plastic bags. Each glass/bag contains 350 ml, which means that Gregorio sells between 300 and 350 glasses of natural fruit drinks per day. Some people however prefer to buy the drinks in 2 litre bottles. The price per glass is 1.50 Bolivianos (21 cents of a US dollar). When he started up his business, Gregorio gave away his fruit drinks for free particularly to poorer people, which rapidly increased his customer base.

At the time of the EnDev training workshop, Gregorio was also selling “Chicharrón” (fried pork skin) each Sunday in Caranavi. He prepared the “Chicharrón” a typical dish in Bolivia, on a traditional stove.

Just as he had done with the fruit drinks, Gregorio decided to change to Malena cook stoves for the preparation of the Chicharrón.

Now, each Sunday he sells about 100 servings of “Chicharrón”, with each serving costing 30 Bolivianos (4.28 US dollar). The food is very popular and normally sells out around noon.

As the demand of for his Chicharrón increased and because his customers did not like to wait, Gregorio decided to build an additional stove in order to prepare larger quantities of this traditional dish. Now, he cooks the Chicharrón on two Malena cook stoves, which he himself has built and adapted to the purpose.

Gregorio has also built an oven so that he can prepare bread and roasts for his family. He built the oven based on the design principles of the Malena stove, with two combustion chambers and a chimney. Gregorio points out that the oven uses less firewood, it emits practically no smoke and the preparation of the food is cleaner. 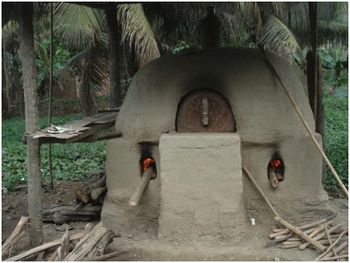 His oven generated significant interest among his relatives and friends and he therefore tried to “sell” his services as oven builder for the price of 2000 Bolivianos (285.71 US dollars). His customers agreed to pay this price for one of his ovens and he promptly received 15 orders for new ovens. Some people even paid him in advance, but unfortunately, he could not comply with the orders due to lack of time and the advance payments had to be returned to the customers.

Meanwhile, family members who were visiting asked Gregorio to build a portable Malena cook stove with a single pot hole. Gregorio accepted the challenge and built a Malena improved cook stove for one pot only for which he charged 200 Bolivianos (28.57 US dollars).

Seeing his business grow, in early 2014 Gregorio and his family decided to hire Miguel Quispe to help. He is currently in charge of cutting and splitting firewood, boiling and cooling the water for the fruit drinks, and assisting in general as required. For this work, he receives a monthly salary of 1000 Bolivianos (142.86 US dollars).

Realising that his kitchen at home was spacious enough to accommodate other activities, Gregorio decided to start selling chicken soup. To prepare the soup, Gregorio built a large Malena cook stove inside his kitchen. The preparation of the soup required additional help and he therefore decided to hire a cook. His soup sales are due to begin sometime during August - September 2015.

Nowadays, Gregorio, his wife Natividad Choque and their daughter Paola Poma, dedicate all of their time to his various businesses.

According to Gregorio, as the sale of soft drinks and Chicharrón was very profitable, it encouraged him to construct his own house, so he decided to sell some land that he had in his home community to raise capital and to take a bank loan to finance the rest.

With the profit that Gregorio earns from his sales of different products, he is able to pay back his bank loan in monthly instalments of 5.000 Bolivianos (714 US dollars) and only needs to pay for two more years. Gregorio never imagined owning a home, but his growing and diversifying businesses have enabled him to achieve this goal.

When asked, Gregorio Poma mentions that he began these initiatives because he realised the advantages of the Malena cook stove in terms of saving firewood, faster preparation of food and a clean and smoke-free cooking environment. Gregorio is convinced that he made the right choice when he started diversifying his business with alternative products, because he based their design on the principles of the Malena stove and this lead to his business prospering.

Retrieved from "https://energypedia.info/index.php?title=The_Journey_of_a_Bolivian_Entrepreneur_with_Malena_Stoves&oldid=133445"
Categories:
Cookies help us deliver our services. By using our services, you agree to our use of cookies.