The Perspective of Agricultural Production: Access to Inputs and Markets

Economic perspectives in rural areas cover not only agricultural production itself but also the supply chain and processing and sales opportunities through access to local, regional and international markets (value chains). Roads induce economic activity and a business dynamic along their length; this is an aspect of the concept of corridor development.

The following article explores the agricultural perspective of transportation in rural areas, focusing on the access to markets and production inputs.

Improved market access through better transport conditions can lead to increased surpluses due to higher producer prices, lower production and transportation costs and reduced spoilage in the market chain, higher value crop substitution and better market information. Meanwhile, deficiencies in transport and other logistics can negatively impact rural agrarian economy and the rural poor as a significant poart of the agricultural output, including fruits, vegetables and dairy products is lost on the journey from farms to consumers.[1]

From the Farm to the Market: The Agricultural Perspective

All over the world, agriculture in rural areas is a key aspect of the population’s income and plays a vital part in regional development. 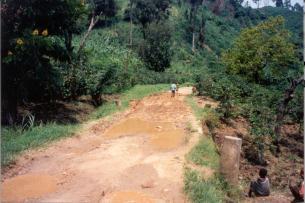 An unpaved road after the rainy season: this one is impassable for the majority of vehicles. Source: Hans Maennchen, Rwanda, 1995.

In most African, Asian and Latin American countries, about 90 per cent of rural households are involved in farming in one form or another. On average they obtain between 70 per cent (Africa) and 50 per cent (Asia, Latin America) of their household income from farming activities (Davis, Winters et al. 2010). To promote these income-earning opportunities, expansion of the rural transport infrastructure often focuses on developing small farmers’ access to the market, to improve their marketing opportunities and the supply of inputs. Where transport routes do not exist or roads are in poor condition, goods cannot always be transported; if transport is possible, the costs may be very high. Seasonal interruptions to transport links are common, for example as a result of flooding in the rainy season. Important, yield-boosting inputs such as fertilisers and machinery can be obtained more easily and more cheaply if there are good transport links to rural centres and markets. An example from Ethiopia shows that households with good access to roads do not necessarily use more fertiliser than the comparison group with less good access, but they pay about 17 per cent less for it (Arethun, Bhatta 2012). Better infrastructure can improve the diversity and quality of the transport services on offer; it can also break up monopolies, thereby helping to redistribute traders’ profit margins to the benefit of agricultural producers. Roads enable families living close to them to boost their economy through processing and direct marketing: agricultural produce can be processed and sold to passing travellers (e.g. sesame biscuits in eastern Niger).[2]


In this context the need for improvements to the transport infrastructure varies according to local conditions. It is generally worthwhile to ensure that roads and tracks remain usable at all times of year and to adapt infrastructure to the potential impacts of climate change, especially if the major synergies for ensuring that the population has access to basic services are taken into account. However, different types of transport infrastructure will be accorded differing priority: investment in the building and expansion of roads is particularly effective in rural areas where there is significant potential for increasing agricultural production and where cash crops can be grown. In areas in which the agricultural potential is lower and in districts in which small-scale subsistence farming prevails with low levels of production for the market, it is often more worthwhile to construct paths and small-scale path networks rather than build more ambitious roads that also require extensive funding to maintain them. To transport their relatively small quantities of harvested produce, many farmers use intermediate means of transport such as carts, bicycles and pack animals. It is therefore appropriate to give priority to making paths and tracks safer and more usable and if necessary to promote IMTs such as carts and cargo bicycles.[2] 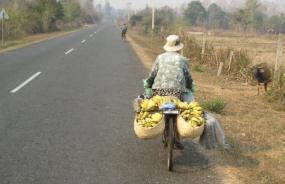 The steadily rising world population, recurring famines and unrest as a result of the soaring prices of staple foods have drawn the world’s attention to the issue of food security and thus, to the development of rural areas and their productivity. As so often, transport is a strategic aspect of this: it is one of a number of elements that play an important part in boosting agricultural production (see above) and also in preventing post-harvest losses, especially during transport. Post-harvest losses are the portion of the harvest that is taken from the field but is lost before it reaches the consumer via the market. Because the data is incomplete, the exact extent of such losses and the way they are distributed over the different stages of the processing and transport chain are unclear. The African Postharvest Losses Information System estimates that in sub-Saharan Africa between ten and 20 per cent of the grain harvest is lost simply between harvesting and processing (i.e. during threshing, storage and transport) (Hoering 2012, p. 7). The loss is even higher for products that are more sensitive to impact and compression, such as many varieties of fruit and vegetables. It is clear that such losses can be significantly reduced by better transport infrastructure combined with additional investment in more efficient and less damaging transport facilities, modern (possibly chilled) storage facilities and modern markets organised on the basis of the appropriate logistics (APO 2006, p. 106). The impact on food security is twofold: on the one hand the products on the target markets contribute directly to the food security of the people who buy them, while on the other the sale of these products provides their producers with an income that can then be invested in the family’s nutrition.[1] [2]

Since 2009, for the first time in history there have been more people living in urban areas than in rural ones. The United Nations calculates that by 2050 about 70 per cent of the world’s population will be living in cities. Urbanisation is increasing particularly quickly in newly industrialising and developing countries, with far-reaching consequences for the reciprocal relationships between rural and urban areas. These consequences will be explored more comprehensivly in the following article:Rural-Urban-Linkages

Hubs and Logistics: The Role of Trade

Trade has an important role to play in marketing rural products beyond regional and national borders.The sales markets for rural products vary considerably according to the country and product. In most of the Least Developed Countries (LDCs), trade beyond regional or national borders is relatively unimportant. In many emerging economies, on the other hand, and especially in Asia, the rural economy is very much oriented towards international markets. In the context, transportation and being connected to the road network is a very important location factor what is explained more comprehensively in the following article: Hubs and Logistics: Hubs and Logistics: Role of Trade in Marketing Rural Products.

Furter information on transport services as a profitable enterprise for smallholder farmers:

Retrieved from "https://energypedia.info/index.php?title=The_Perspective_of_Agricultural_Production:_Access_to_Inputs_and_Markets&oldid=83202"
Categories:
Cookies help us deliver our services. By using our services, you agree to our use of cookies.