The Role of Gender in the Energy and Agriculture Nexus

Access to improved energy services can alter women’s social, economic and political status — reducing the time and effort involved in household activities, providing better health and educational conditions, enhancing income-generating opportunities, and facilitating their participation in public affairs. The integration of gender issues is thus vital for energy projects in developing and emerging countries.[1] With view to the agriculture and energy nexus, the role gender plays is rather complex, as it concerns the role of gender in agriculture/agricultural value chains (especially in the processing stages due to the high energy needs), the role of gender in energy poverty, and the role of gender in energy projects. This article will look at these aspects to support gender mainstreaming for clean energy solutions for the agriculture and food industry. 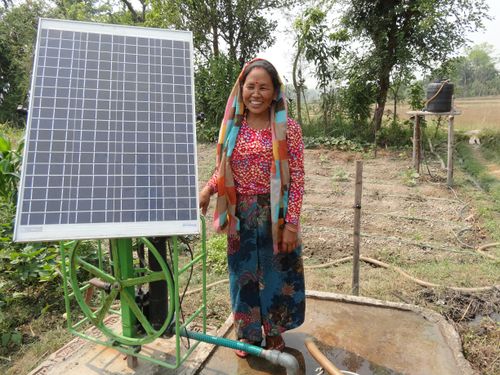 Woman in front of a solar panel in Nepal (©iDE)

Agriculture plays a large role for economic development in developing countries, yet agriculture is also very energy intensive ( Energy within Food and Agricultural Value Chains). Up to 70 % of the labor force in developing countries works in agriculture, and women make up the majority of agricultural laborers.[2] Gender inequalities are, however, widespread, especially with view to land distribution, access to credits and access to agricultural inputs such as seeds and fertilizer, and reduce agricultural productivity and efficiency.[3] Women also fare worse in the adoption of agricultural technologies , although, according to the International Center for Research on Women, enhancing women’s access to vital agricultural inputs that require intensive use of energy, such as irrigation technologies can substantially boost their agricultural productivity and incomes.


And here: National Geographic, 2014. Revealing the Gap Between Men and Women Farmers

Furthermore, the majority of informal sector enterprises in developing countries are owned and operated by women, with women making up the largest proportion of the work force. Their enterprises tend to be concentrated in a relatively narrow range of activities, are often very energy intensive, yet rely on biomass fuels and have disproportionately low rates of return compared to the activities undertaken by men. Also men dominate those income activities that are more value adding and require more advanced equipment, such as energy technologies. In food processing enterprises it has been estimated that energy costs are 20 - 25% of the total inputs, which would suggest that technological interventions could increase the scale and profitability of these businesses.[4]


See also: Productive Use of Energy for Rural Development and Energy in Agricultural Processing

Gender Issues in the Context of Energy Poverty and Rural Development

Expanded energy sources are necessary to provide: mechanical power for agriculture, food processing, water pumping and irrigation; modern fuels for cooking and heating; electricity for lighting, refrigeration, communications, commercial enterprises and community services in rural areas. Without access to efficient and affordable energy sources, rural communities have thus very limited opportunities for economic and social development.[5] Access to Modern Energy is however problematic in most developing countries. According to the estimates of the International Energy Agency (IEA), 2.6 billion people around the world currently rely on traditional uses of energy to cover their basic energy needs. This figure is expected to rise to 2.7 billion by 2030.[6] Over 80 % of these people live in the rural areas of Africa and Asia.


This lack of access to energy is experienced very differently by men and women in developing countries. The energy sector continues to be dominated by men, especially at decision making levels. Households headed by women are particularly disadvantaged, which constrains women’s energy access as well.[7] Poor women in rural areas generally have a more difficult time compared to men, due to their traditional socio-cultural roles. They often spend long hours collecting fuel wood and the time and labour spent in this way limits their ability to engage in other productive and income-generating activities. Their health suffers from hauling heavy loads of fuel and water, and from cooking over smoky fires. Their opportunities for education and income generation are limited by lack of modern energy services, and as a result their families and communities are likely to remain trapped in poverty.[8]

Although "gender inequality persists at every level of the energy sector, gender sensitive energy projects and research are still the exception rather than the rule” [4].


Women in rural areas face particular obstacles in accessing renewable energy technologies due to their relatively high poverty levels, lower access to credit (due to low access to land and other resources that could serve as collateral), lower literacy rates and less access to information.[9] According to the Wuppertal Institute for Climate, Environment and Energy (WISIONS), lessons learned from their projects (SEPS) show that gender can influence the sustainability of a project, the technological choice, the use patterns and the decision-making. While they find that about 47% of project designs addressed gender issues less than fairly, the choice of technology had no significant influence on how far gender-related concerns were considered as part of the project concepts. Furthermore, while projects where implemented in over 40 countries in Latin America, Asia, Africa and the Middle-East, no concerning differences could be found between those regions. Projects in Latin America had, however, a slightly more gender-sensitive design. Yet, it has also been demonstrated that integrating gender issues i.e. women’s needs as a key variable in energy projects makes it more likely that energy will have a substantial impact on household and community poverty and on gender equality. Thus where energy interventions address women’s equal participation, the potential for benefits is much higher for all.[10]


See: The Role of Gender Concerns in the Planning of Small Scale Energy Projects (WISIONS)

Gender and the Agriculture and Energy Nexus

In their article “Energy and Agricultural Technologies for Women’s Economic Advancement” the International Center for Research on Women (2012) states that engaging women in the development and distribution of a (renewable energy based) agricultural technology, which in turn enables their access and use of the technology, generates a positive chain reaction with extensive outcomes. This process unlocks two key pathways to economic progress for women by; 1) enhancing women’s productivity in existing economic activities, and 2) by creating new economic opportunities for women. For example, technology that irrigates arable land (e.g. Solar Powered Irrigation Systems) can improve crop yield and reduce the amount of time women must spend collecting water. To this end, female-headed households in Ethiopia increased their net incomes on average by US$268, or about 18 % by using treadle irrigation pumps.[11]

Solar irrigation can also have a positive impact on gender equality. Women in Africa and Asia make up 50% of the agricultural labor force, yet they have less access to credit and formal banking, which can be improved by credit history borne from payments for pay-as-you-go solar water pumps. Savings in time and labor were also seen in irrigation projects by the Solar Electric Light Fund, which supported women’s farming groups in rural Benin. It is the women’s traditional role to haul water by hand, often from very long distances.

Solar Sister, a network of energy solutions distributors, shows how female entrepreneurs can play a role at the forefront of the clean energy revolution, with the company growing from two to 1,250 entrepreneurs in just five years.


ICIMOD's subside program for SPIS in Nepal: To promote the uptake of SPIS in Nepal's Terai, ICIMOD provides a subsidy to farmers in the Terai region of Nepal. This region also has a huge gender gap between men and women and thus to close the gender gap as well as promote the uptake of SPIS by women farmers, it additional 10% subsidy if the land is registered in the women's name.

Solar Market Garden in Benin: The SPIS systems are usually expensive and thus, small holder farmers are not able to afford them, especially the women. Thus, this project led to the formation of solar market gardens where 35-45 women come together and form a cooperative. As a cooperative, they are then able to afford the SPIS system as well as sustainably maintain them. The SPIS system then reduce the drudgery for the women and also increases the agriculture production.

Powering Agriculture: An Energy Grand Challenge for Development (PAEGC) has published a series of 6 topical guides focused on integrating gender into the development and deployment of clean energy solutions (CES) for the agricultural sector. The practical guides can assist innovators and others working in the clean energy/agriculture nexus and related fields to better reach and serve women—a large, important, and often overlooked market segment.

The guides cover the following areas and you can access individual guides by clicking on the topics: